How Smart Leadership Can Effect Improvement

From the former secretary of defense and author of the best-selling memoir Duty, comes Robert Gates’ newest book, A Passion for Leadership: Lessons on Change and Reform from Fifty Years of Public Service, is a characteristically direct, informed and urgent assessment of why big institutions are failing us and how smart, committed leadership can effect real improvement, regardless of scale.

Across the realms of civic and private enterprise alike, bureaucracies vitally impact our security, freedoms and everyday life. With so much at stake, competence, efficiency and fiscal prudence are essential, yet Americans know these institutions fall short. Many despair that they are too big and too hard to reform.

Gates disagrees. Having led change successfully at three monumental organizations—the CIA, Texas A&M University and the Department of Defense—he offers us the ultimate insider’s look at how major bureaus, organizations and companies can be transformed, which is by turns heartening and inspiring and always instructive. 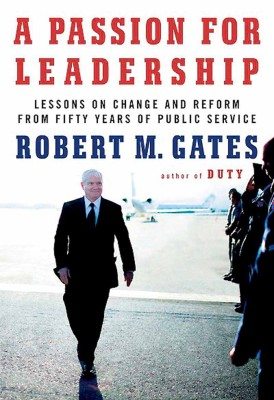 With practical, nuanced advice on tailoring reform to the operative culture (we see how Gates worked within the system to increase diversity at Texas A&M); effecting change within committees; engaging the power of compromise (“In the real world of bureaucratic institutions, you almost never get all you want when you want it”); and listening and responding to your team, Gates brings the full weight of his wisdom, candor, and devotion to civic duty to inspire others to lead desperately needed change.

Gates served as secretary of defense under both President George W. Bush and President Barack Obama. He was also an officer in the United States Air Force and worked for the CIA before being appointed director of the agency.

A member of the National Security Council staff in four administrations, Gates served eight presidents of both political parties. He was president of Texas A&M University from 2002 to 2006, is currently chancellor of the College of William & Mary, was named president of the Boy Scouts of America in 2013, and has served on several corporate boards of directors.