The evening will feature a performance by the comedian

Sid Jacobson JCC proudly announces its annual Eat. Bid. Laugh! An Auction & Epicurean Event. Long Island’s premier fundraising event will be held on Thursday, March 28, at 6:30 p.m. at Fresh Meadow Country Club in Lake Success. This year’s event will include a performance by Emmy Award-winning comedian John Mulaney, tastings from top local restaurants, and extensive silent auction prizes. Tickets are now on sale and can be purchased at www.sjjcc.org/auction.

“This sell-out event connects hundreds of donors, sponsors, and participants who are passionate about supporting the JCC’s integral work in the community,” said Brooke Rosenman, Eat. Bid. Laugh! An Auction & Epicurean event chair. “The funds raised by Eat. Bid. Laugh! create and sustain transformative programs that meet the needs of all.”

Last year’s event raised more than $1 million, all of which helped enhance the lives of those who rely on the JCC’s quality services. One of the many beneficiaries of the money raised each year at Eat. Bid. Laugh! An Auction & Epicurean Event is the Sheldon A. Sinett BASICS Fund. Maintained as an incubator fund, BASICS has the goal of funding Sid Jacobson JCC’s social service programs. Impacting thousands in the community, BASICS has funded more than 70 new programs within the last 13 years. These programs serve all individuals and populations, some of which include: the first of its kind young-onset Alzheimer’s program, teen mentoring, special needs programs including vocational training, and individuals dealing with a cancer diagnosis. 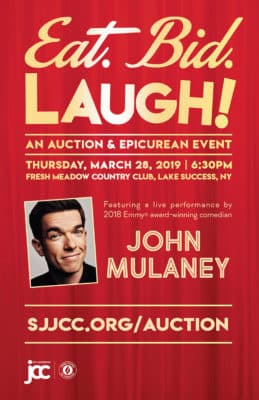 “We’re thrilled to have a household name like John Mulaney performing for this year’s attendees,” said Tracy Levy, Eat. Bid. Laugh! An Auction & Epicurean event chair. “It’s such an exciting night filled with a sense of hope and generosity, and Mulaney is the perfect fit to add a touch of humor to the feel-good atmosphere.”

Mulaney is an Emmy Award-winning writer and comedian. He has spent the past year touring the United States with his most recent show, “Kid Gorgeous,” which was also released as a Netflix special in May 2018 and won the Emmy for Outstanding Writing in a Variety Special. Previously, Mulaney starred in the Broadway hit Oh, Hello alongside Nick Kroll. He can currently be heard in Spider-Man: Into the Spider-Verse, which won a Golden Globe for Best Animated Feature Film.

For more information about Eat. Bid. Laugh! An Auction & Epicurean Event or to purchase tickets, visit www.sjjcc.org/auction or contact Bridgette Troisi, Assistant Director of Development at 516-484-1545 ext. 141 or btroisi@sjjcc.org.