Shea Serrano Makes History With Movies (And Other Things)

Shea Serrano became the first Mexican-American author to have three different books chart on the New York Times bestseller list when Movies (And Other Things) took the No. 1 spot in the publication’s November rankings. Reaching the apex after years spent writing his way to the literary mountaintop turned out to be bittersweet.

“It’s one of those situations where of course you’re excited that it happened but then the more time you spend with it you realize that it’s at least a little bit sucky,” Serrano said. “It should have happened already. It’s crazy that this is the first time that it’s happening.”

The San Antonio native was humble about his success, and attributed it more to his ability to cultivate a fan base on social media than any particular set of skills he has acquired over his career.

“I don’t think I’m just a super great writer or anything like that,” Serrano said. “I just happened to have Twitter, and other people didn’t before me. It’s easier to cultivate a following, and then you’re just selling directly to them.” 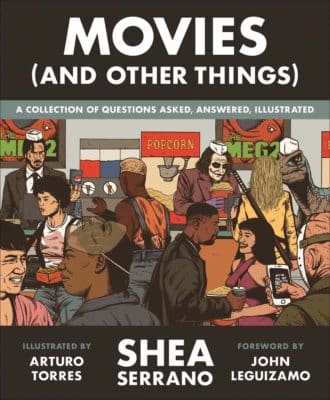 Serrano has cultivated a Twitter following more than 300,000 strong through his years writing for the now-defunct Grantland and The Ringer. He uses the platform to promote his work, joke around with fans and insist he is, in fact, not short. From time to time he delves into politics, raising money for charities and those in need and firing shots at Donald Trump, but Serrano said he doesn’t maintain any illusions about his own importance or the importance of his work.

“The stuff that I’m writing about, I treat it very seriously and earnestly,” Serrano said. “But ultimately it’s a silly way to earn a living. I was a teacher for nine years. That job made me feel important, and I don’t feel that why I’m writing, which is why I spend a significant amount of time speaking out about things. I know writing about I Am Legend isn’t going to change anything. But maybe if I write about it well enough and enough people like it, then when I go ‘hey, we should do something about this,’ those people will act.”

Still, impact or no impact, Serrano hopes he can at least help people have a little fun.

“I’m trying to celebrate the stuff that I like,” Serrano said. “Any movie that gets mentioned in the book is a movie that I like, except Green Book.”

Movies (And Other Things), like its predecessor Basketball (And Other Things), is a collection of essays that center around some aspect of the titular topic. Serrano humorously explores questions ranging from “Who’s the coolest movie dog owner” to “Were the Jurassic Park raptors just misunderstood?” At every step of the way, Serrano’s writing is accompanied by illustrations from Dallas illustrator and frequent collaborator Arturo Torres, and the collection is bookended by a foreword from John Leguizamo and an afterword from Don Cheadle.

Serrano has his own criteria for evaluating the movies that made it into the book. Critically-acclaimed darlings like Goodfellas and Kill Bill are explored and celebrated alongside films like Will Smith’s 2007 action flick I Am Legend, which sports a barely-passing 68-percent rating on Rotten Tomatoes. The movies that stick with him, he said, do so because of the experience he had watching them more than any technical achievements.

“Watching a movie to me feels the same as listening to music,” Serrano said. “You put a song on and you feel it in your chest, there’s just something about it and you just feel it. That’s the main thing I look for, I look for a movie to make me feel that.”

Through his work for Grantland and The Ringer, Serrano became known for his humor and his easygoing, personable style, on full display in pieces like “The ‘If I Fought This Rapper, Would I Win?’ Chart” and “The Rules And Regulations Of The Jurassic World Theme Park.” Serrano’s style is almost confessional; he weaves in personal anecdotes and pop culture throwbacks to drive home whatever broader point he’s trying to make.

“I had an editor give me some really good advice when I was starting out,” Serrano said of his technique. “He read an anecdote I had put in a thing I did that didn’t have any point to it and he called me out on it. He told me every article you write should reach a conclusion, and every sentence in that article should help you reach a conclusion. So if it’s not, you’re doing something wrong.”

Serrano brings that same confessional bend to his latest bestseller, and by the time they’ve gone cover to cover on Movies (And Other Things), the reader will know just how embarrassed the family man felt when he fell off a ladder in front of his kids, among other things.

Movies (And Other Things) is published by Twelve Books and available for purchase through Barnes and Noble and Amazon.

Mike Adams
Mike Adams is the editor of the Great Neck Record and The Roslyn News.