Sharing The Road With Motorcycles

The new F-150 kicks off a new generation as Ford optimizes its technology and reveals a hybrid version of the pickup.
Read more
Home Improvement 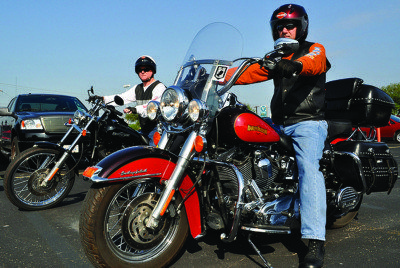 Nassau County Acting Police Commissioner Thomas C. Krumpter would like to remind motorists that it is important to be cognizant of sharing the road with motorcyclists.

Motorcycles lack the safety devices of most cars and trucks, like seatbelts and airbags, which would explain why it’s almost always the motorcycle riders who are most at risk in collisions with passenger vehicles.

In addition to their ability to weave in and out of lanes, motorcycles are smaller and harder to spot. Motorcycles are the smallest vehicles on the roads. And because of their size, they often appear to be faster and farther away than they actually are.

Here are six general rules to bear in mind the next time you share the road with motorcycles.

Motorcycles are smaller than cars; it’s that much easier for them to slip into your blind spot—especially when they’re attempting to pass you. Swivel your head to check your blind spots regularly and, in particular, before changing lanes.

Increase your driving distance when you find yourself behind a motorcycle and maintain a cushion of at least four seconds. Choose an object (a tree, road sign, or house) and count the seconds between when the motorcycle passes and when you pass. This cushion gives you time to react to the unexpected.

You already know it’s important to adjust your driving in bad weather. Inclement weather including strong winds is even more hazardous for bikers than for drivers. Bad weather conditions reduce our own visibility and may make motorcycles more difficult to see. Give yourself and the motorcyclist additional space.

Look before you turn

A whopping 44 percent of two-vehicle, fatal motorcycle accidents in 2013 were the result of a car trying to turn left while the motorcycle went straight, according to the Insurance Institute for Highway Safety. Initiate your turn signal sooner than you normally would when you know there is a motorcycle near you.

If you see a motorcycle at an intersection, attempt to make eye contact with its rider before turning in its direction. Many motorcycles aren’t equipped with self-canceling turn signals like cars; a rider simply may forget to turn it off. If you have to pass or drive next to a motorcycle with a lingering turn signal, proceed with caution.

Driving at night can be treacherous for motorcyclists. When driving at night increase your following distance and ensure that your high-beam lights are turned off when you notice an approaching motorcycle and refrain from passing.

Motorcycles react more quickly than cars; maintain an adequate following distance while maintaining a safe lane of traffic. Always be extra cautious when passing, motorcycles may become unstable from the gust of wind created by your passing vehicle. Always leave several car lengths between vehicles.

Previous articleHelping A Girl Feel At Home
Next articleA Day Of Military, Not Monetary, Remembrances