Pandemic spurs specialty foods wholesaler to open up first-time home delivery service With the COVID-19 pandemic upending everything up to and including the economy, businesses...
Read more
TOP STORIES

Barbecue purists are as finicky as they are knowledgeable. These perfectionists of the pit tend to believe that regional separation of meats, sauces and rubs must be diligently maintained—that the sacred art of low-and-slow would crumble if the flavors of different preparations dared to mingle.

Let that outdated barbecue belief system stay in the southern states, for up here in the north, the pit is a party and everyone is invited. Such is the concept at the heart of Sempre Fame Gourmet Grill, BBQ & Catering, an unassuming storefront in Floral Park that houses the best of all that is smoked, sauced and kissed by a flame this side of the Mason Dixon Line.

Opened about five years ago by brothers John and Chris Cavallo, Sempre Fame (translated from Italian as “Always Hungry”) has steadily built a loyal fan base on a solid foundation of barbecue classics like pulled pork and brisket, but also with uniquely inventive sandwiches and over-the-top burgers as well as insane snacks like deep fried pig skins, smoked fried wings and empanadas (which they obviously dubbed “Semprenadas”). And outside of the store, Sempre Fame’s catering efforts have progressed to mythical proportions, transforming backyards, offices and more into staging areas for mouth-watering succulence.

The friendly and inviting restaurant’s menu is indeed a confluence of barbecue styles, with Texas, Carolina, St. Louis and every regional favorite in between given a home under Sempre Fame’s roof. And bringing it all together is the old-world influence of the Cavallo’s Italian heritage—a love for food that is apparent in the eatery’s creative preparation and adherence to fresh ingredients. And it is precisely that Italian influence that separates Sempre Fame from the rest of the pack.

“Growing up, we would cook all day,” John said with his brother Chris nodding in agreement. “As an Italian family, it was all about the food.”

That mantra remains true at the Cavallos’ restaurant, with the Italian heritage making its way into some of the preparations. This is particularly true with the Pyro Pork sandwich, which loads pulled pork, bacon and mozzarella on Texas toast with the game-changing cherry pepper sauce, a proprietary concoction that brings just enough heat to the sweet bite of the pulled pork. Viewed in all its glory as a cross-section, the sandwich is thick, lush and dotted with bits of cherry pepper, while the taste itself is almost overwhelmingly deep and dynamic.

Another must order sandwich is the brisket with mozzarella cheese and sautéed onions. Here, it’s the sautéed onions that elevate the sandwich to another flavor level, as the caramelized onions bestow their natural sweetness unto the heartiness and big smoky bite of the brisket. Other enticing sandwiches are the smoked pork belly BLT, grilled chicken with roasted peppers and fresh mozzarella, pulled pork Cuban and the Alabama wrap, with chicken cutlet, sautéed onions, melted mozzarella, French fries and Alabama white sauce. Then there’s the deliciously unhinged sandwich, the Clogs, with smoked brisket layered between chicken cutlets, topped with melted mozzarella and bacon.

Traditional barbecue is far more apparent in Sempre Fame’s platters, with the likes of brisket, smoked corned beef, pulled pork, ribs, marinated grilled chicken and barbecued legs and thighs beaming with the classic hallmarks of the smoked arts—deeply flavored, sticky and sweet, with a robustness that ensures eaters will need to roll themselves out of the restaurant when the meal ends. But even the barbecue mainstays are subject to treatments that aren’t exactly traditional. Case in point is the deep fried ribs, ordered by the half or full rack. 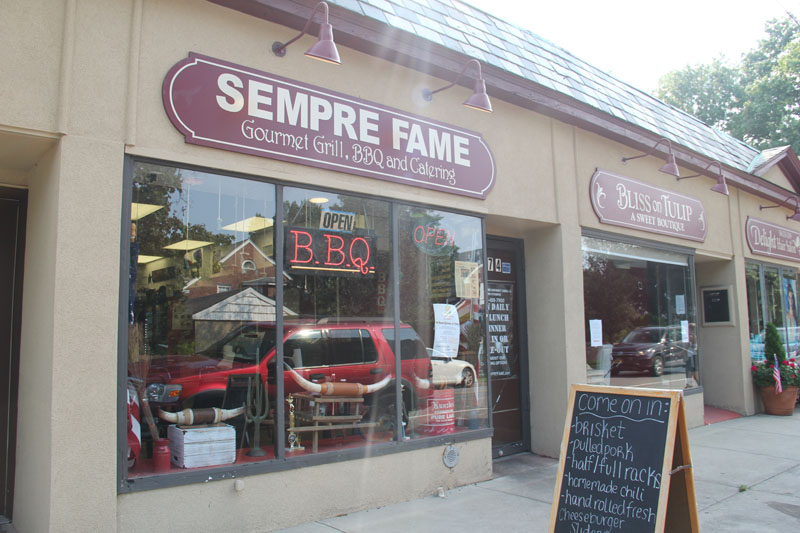 As the story goes, an employee was looking for a late-night bite after all the smokers had been shut down for the night. Rather than go to bed hungry, the unnamed genius dropped the ribs into the deep fryer. The resulting ribs are now a constant on Sempre Fame’s daily specials menu. Some might think that deep fried ribs would be dry and tough—that is a monumentally incorrect assumption. These ribs bite clean off the bone with a tender juiciness that sets the saliva glands to drool. The frying process also produces delightfully crisp rib-ends.

For side dishes, the usual suspects are all available at Sempre Fame, including mac ‘n cheese, buttered corn, collard greens, fresh cut fries, sweet potato fries, cole slaw, potato salad and truly next-level baked beans that one can surely smell from around the corner.

Sempre Fame’s commitment doesn’t end with barbecue, as the eatery is incredibly active in the community. Along with partnerships with local schools, a sponsorship of Little League teams and many other charitable endeavors, including a yearly Christmas visit to the Ronald McDonald House of Long Island, Sempre Fame also hosts two events a year with the Association of Children with Down Syndrome (ACDS), inviting youngsters to the restaurant to hang out and eat.

“It comes naturally to us,” John said about the restaurant’s relationship with the community, as he flipped through a binder stuffed with “thank you” notes from appreciative organizations. “It’s good to give back.”