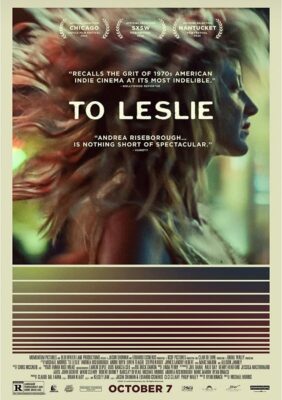 If the idea that money and success only amplify who you already are, then the profligate and addictive main character who wins a $190,000 lottery prize in the new film To Leslie is destined to hit rock bottom rather quickly. Based on a true story drawn from screenwriter Ryan Binaco’s own life, this drama stars Andrea Riseborough (Black Mirror/Stalin Must Die) as the film’s namesake—a working class single mom from Texas with a 14-year-old son who wins this monetary bounty, only to burn through it six years later. A raging alcoholic, she is estranged from her family, has wound up homeless after getting bounced from the run-down motel she was staying in and is trying to desperately reconcile with her now 20-year-old son, James.

Riseborough’s stark and raw performance as someone who can’t get out of her own way is buttressed by a number of other notable cast members’ solid turns including Allison Janney (Mom, Bad Education) and Stephen Root (Barry, News Radio) as biker couple Nancy and Dutch, who take in James and Lesley at different times. Comedian Marc Maron, who plays Sweeney, also shines as the main character’s future employer and love interest. In a world of working class bikers, construction workers and cowboys deep in the heart of the Lone Star State, Riseborough’s reckless barfly has torched numerous personal bridges and made her a hometown laughingstock, still trying to right her personal ship despite putting on an air of false bravado and indifference. It anchors the filmmaking debut of director Michael Morris, who previously helmed episodes of Billions and Better Call Saul and drives this script that roped Root and Maron into becoming involved.

“What always draws me to a project is the script and this one is great, not good,” Root said. “Secondarily, the people you get to work with. I always wanted to work with Allison Janney since we walked by each other in West Wing. [Director] Michael [Morris] is someone I knew socially with his wife Mary [McCormack], I was happy that he was able to see through the nerd comic book boy [that I am] into me being a biker because it was really fun to play.”

Maron took a little bit more convincing between his own self-doubt as an actor and the lingering pandemic hangover that found him asking out loud if anyone was going to even care about this domestic drama.
“Michael really was persistent and I really was resistant,” the Jersey City native admitted. “Then I read the script and it definitely was a guy and it wasn’t me. Then I was like, ‘Why does he want me? There are a million guys who can do this.’ Then he actually enlisted Chelsea Handler, who he knows somehow, to pester me. She’s a lot to be reckoned with. You can’t really say no to Chelsea Handler. Michael convinced me that he appreciated certain qualities I could bring to this [role] from watching my show Maron. Also, I knew if I wanted to do acting and not get typecast, I’d have to take chances. I then said, ‘Okay man. I believe that you believe, so I’ll go along with it.’ It worked out. It was a great experience.”

The 19 days it took to film didn’t give either Root or Maron much time to prepare to play their respective characters. For the former, it was more about cultivating Dutch’s appearance.
“I had a very specific look for this character—something I don’t usually do,” he said. “It was kind of nice to be able to come from the outside and feel the guy out with the clothes, hair, beard and the whole nine yards. Given the length of the shoot, I didn’t have a whole hell of a lot of time to overthink it, which I think is a good thing. If you’re very happy with who you’ve chosen to work with, be it the director or actor, and all of these actors are fantastic, then you can relax and do the job quickly. And that’s what we did, even during COVID-19.”
Maron went a little deeper, going so far as to really work on his character’s accent despite the fact that Morris was more than happy with what the 59-year-old comedian was bringing to the project.

“With this guy, I did really have to make adjustments around not being me and I did have to go deeper into a vulnerability that I haven’t really experimented with that much as an actor,” he explained. “I met with a dialect coach and she said that we were going to do a Lubbock accent. I said, ‘I don’t even know what you’re saying.’ I grew up in New Mexico, right next door to Texas, and a lot of people in Texas don’t feel like they have accents and that might be true. Lubbock is very specific. The funny thing about it was that she said she was going to send me some videos to kind of get a sense of what Lubbock sounds like and it was all videos of Mac Davis doing interviews. I like Mac Davis alright, but that was the example she had. Then she had these phonetic pronunciations written down. That was a big part of the prep—how to get into that and not worry about the accent. I also had to be available for what Andrea was putting out as Leslie and to honor the emotions of that relationship. It was the most challenging thing I’ve done as an actor.”

While both Root and Maron were extremely pleased with the various aspects of To Leslie, from their fellow cast members and Morris’ directing to the script and pacing, Riseborough’s portrayal is what had them both raving.
“Andrea Riseborough is a force of nature,” Root said. “She’s so whole and present at all times and it was just a joy to work with her. I had no idea how astonishing she was as an actor. Everybody is great in this film but she was exemplary and it was really an honor to be on screen with her.”

As a recovering alcoholic, Maron was quick to point out how authentic Riseborough’s Leslie is.
“One of the problems people have with empathizing with drug addicts or alcoholics is they’ll say, ‘Why don’t you just stop. Where is your will power?’,” he said. “That’s really unsympathetic to the disease’s nature and the psychological compulsion of the problem.
I think Andrea handled that really well—that she was definitely losing to the disease.”

To Leslie is in theaters Oct. 7.