All the beasts fit to roast

Some say the holidays are all about the spirit of giving. While others say ‘tis the season of spending time with loved ones. Both are fine sentiments, but in actuality, the holiday season is all about big hunks of meat. Seasoned, roasted, sliced hunks of meat.

It says a lot about the human species that the first prehistoric person to stick meat into fire was probably the very same individual who first discovered said fire seconds prior. The aroma of roasted succulence must have been comforting for our ancestors surrounded by predators in primeval Earth—just as it’s comforting when we are surrounded by rabid family members on Christmas Eve.

The list of roast beasts best fit for the holiday table includes classic preparations, as well as more modern interpretations of oven-bound animals—bone-in and bone-out. But rather than wait for Christmas Eve or your Hanukkah gathering to find out what will be on the menu, be proactive and give your host the gift of meat. 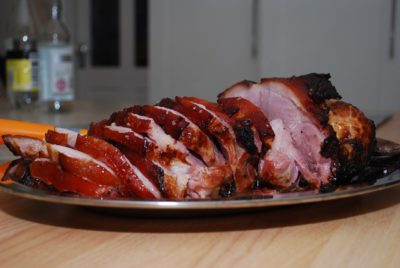 Go beyond the meat section at your local grocery store and locate a reliable butcher, the more old fashioned the better. There are plenty on Long Island, including The Butcher Place in Carle Place, Center Cuts in Roslyn Heights, Andy’s New Hyde Park Meats, Farmingdale Meat Market, Fork & Clever in Malverne, Forest Pork Store in Huntington, A & S Italian Pork Store in Massapequa and Franklin Square, Steve’s Prime Meats in Freeport—the list goes on. There are many reasons to opt for a butcher shop over a grocery store meat section—supporting small business is one reason, but mainly because butcher shops tend to boast cuts of meat that are far better quality, if a bit more expensive.

Topping the list of quintessential holiday meats is undoubtedly the glorious ham, which is equally desirable as a fresh ham or the honey-glazed, cured variety. Even those tin-can hams have a place at the table this time of year, with the iconic Dak Premium Ham 16-ounce ham-shaped can making a wonderful stocking-stuffer.

But if your pork preference is the unadulterated version, go with a fresh ham, which is basically roasted pork—the same cut used in cured ham, only without the cure. This version of ham is usually sold with skin on, which offers the double gift of pork cracklings to go with the juicy, roasted cut. The classic rosemary, garlic and lemon application suits this ham well, though it might be more fun to go the sticky route with a recipe featuring either a maple-mustard or a soy sauce glaze. Fresh ham tends to go for about $3 per pound and while most butchers have fresh ham on hand, it’s best to place your order about a week ahead of your party.

Lamb is another holiday regular in the roaster, with multiple cuts led to the slaughter as the celebratory roast on the holiday table. Whether it’s the leg or the more eye-pleasing crown roast, lamb tastes of the earth—with the gaminess of a beast that spends most of its time with its snout to the ground. The price-per-pound for a leg of lamb fluctuates wildly, according to local butchers, with the price currently hovering at about $6 per pound. As for the crown roast, which is lamb racks tied together end-to-end into the shape of a crown, many butchers will do the work of assembly for you. Either a leg or a rack, thyme, rosemary and even some coriander make perfect barn-mates.

For those who don’t eat pork and can’t stomach lamb, beef is a beautiful, classic fall back option. London broil, which gets unwarranted flak for its perceived lack of flavor, stands up well to any preparation and can be sliced in a way that really stretches out it’s approximately $10 per-pound price tag for the sirloin cut. But this is the holidays—the time of year when meat is more than food, it’s an event. With this in mind, order a bone-in standing prime rib roast—an expensive cut at about $20 per pound from a butcher, gifting this cut to your host will send all the right meat messages.

For a fancier preparation, try your hand at mastering beef Wellington, which sees a beef tenderloin coated with pâté and duxelles—a finely chopped mix of mushrooms and herbs—before it’s wrapped in puff pastry.

And finally, when chicken gets boring and turkey’s been done, go for the dark and fatty option with a whole roasted duck. At about $2 or $3 per pound, these water fowls can be specially ordered from a butcher or from a farm specializing in duck. There are various methods of prep with duck, including orange or blueberry, but perhaps most fitting this holiday season is the more uncommon and singular raspberry duck. With a hint of cinnamon and a tangy raspberry sauce, this particular preparation is powerful enough to make everyone forget that you neglected to bring any gifts other than various cuts of meat.