You can say junk is in Orville Davis’ blood. His late father Winston Davis, who passed away from a stroke in 2007, owned a Queens-based junkyard, one of the largest in the New York Metro Area. Furthermore, the younger Davis was born when his mother Olivia went into labor while helping her husband at the junkyard and gave birth to him there.

Nowadays, Davis and wife Cynthia are updating the family business via the Massapequa-based Scrap-It!, an eco-friendly waste removal company the duo started in the past two years that Cynthia explains has a more socially conscious approach than any of their competitors.
“We’re different because we actually take the time to sort the items we get, repurpose them and find out where the best recycling and donation centers are to go to,” she said.

The company’s roots date back to when the duo met while attending Nassau Community College. The couple eventually graduated from Farmingdale College, Orville focusing on business and computer programming and Cynthia keyed in on bioscience. It was at Farmingdale where they entered a 2018 business competition that required teams to invent a business solution to a real-world problem before presenting it to a panel that included judges from PSEG. Waste removal was the issue the couple tackled and Scrap-It!, an app idea hatched by Orville, became the centerpiece. It won the competition’s $1,000 first prize and from there, the idea was entered in a number of other competitions including the e-Fest Schulze Entrepreneurship Challenge in Minnesota, hosted by Best Buy founder Richard Schulze. While they didn’t place in that contest, entries into other New York State competitions led to a pair of first place finishes and two $10,000 prizes. With the app needing more funding and the couple starting a family with the birth of now-15-month old Kingston (who was joined by little brother Princeton a month ago), the Davises launched Scrap-It! via a website and a network of scrap haulers. As the nascent business launched, the pandemic hit. But while it derailed many other companies, it proved to be a major opportunity for these small business owners.
“A lot of people in Manhattan and Brooklyn started moving back to their second homes on Long Island and realized there was a lot of stuff they had to get rid of,” Cynthia said. “Our phones started ringing like crazy as so many people were home, cleaning out their garages and basements and wanting to get rid of their items.”

Given that Scrap-It!’s mission statement is working towards a zero-waste community while seeking to prevent 70 percent of waste from ending up in landfills through partnerships with local churches, donation centers, thrift shops, scrapyards and other recycling centers, COVID-19 protocols caused a problem. The company was saddled with finding homes for items not slated for a landfill.
“Places like Big Brothers and the Salvation Army come in and pick up donations for free, but they weren’t doing that, which meant we got more and more calls,” Cynthia explained. “And while we would usually take people’s furniture and go to donation centers, they were closed and we had to figure out what we were going to do with all these items. We got creative and started getting storage units and listing the furniture onto online markets to sell or just give away. We started having garage sales and even saving some things in our garage.”

Eventually, restrictions eased up and Scrap-It! resumed its partnerships with numerous donation centers (AMVETS, Salvation Army, Big ReUse, Habitat for Humanity, Goodwill) and recycling centers (Gershow Recycling, 2 Brothers Recycling, Plakos Recycling, Sims Metals, Benson Scrap Metal). Scrap-It! and its seven employees cover all of Long Island and New York City and advertises on Yelp, Thumbtack and Angi’s List (where you can view a number of five-star reviews). Customers call and the team comes out to assess the size of the job, taking note of what needs to be removed, what is recyclable, where it will go and other nuances (number of rooms, stairs, etc.) Once the job is performed on the agreed-upon removal date, arrangements have already been made with one of the aforementioned business partners. And while a good portion of Scrap-It!’s customer base comes from residential assignments, commercial business clients have also come calling.
“We have commercial clients that have office furniture to get rid of and also have papers and documents they want to dispose of,” Cynthia said. “We also have a partnership with Shred-It, a company that comes and shreds the papers. We factor that into the cost. Our customers are really happy about that because those documents are very sensitive and they love knowing that they’re being taken care of.” 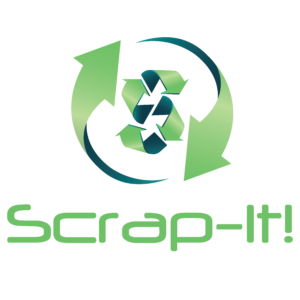 With business humming along, the beta launch of the app is on the horizon with a launch date roll out slated for the next three months. The Davises plan to get smaller junk removal companies onto their platform that will follow the same eco-friendly business playbook Scrap-It! has been drawing from. In the meantime, Orville and Cynthia are getting enormous satisfaction from the positive feedback they’ve been getting from their customers.
“When our clients know their items we take are repurposed and have found a new home, they get really excited,” Cynthia said. “People want to get rid of their things and they want them to go to a good home. When they don’t end up in a landfill, they really appreciate and love that.”