Alton Brown dishes out science and food during new tour

For Alton Brown, a kitchen isn’t just a place to prepare food, it’s also a laboratory. The celebrity chef has made a name for himself with his ability to blend the culinary arts with science, helping eaters understand the connection between what they eat and the chemistry behind it.

Learning why dishes taste or are prepared the way they are isn’t just interesting information, Brown said. An understanding of science is crucial to the cooking process.

“Everything involved with food preparation is science,” Brown said. “My angle has always been the more you understand and appreciate and learn how to work with that reality, the better a cook you’re going to be.”

Though nowadays, Brown’s days are often filled with doing experiments with food, he said he wasn’t always a fan of the science. During high school he had no patience for the subject, his interest only sparking when it came to dissections. He picked up cooking in college and soon realized the connection between making a great dish and understanding the chemistry behind it.

“In high school I kept it in complete non-regard,” Brown said. “But later on I realized I actually need science if I’m going to understand how to be a better cook. I had to take a lot of time to learn it all again.”

For almost 20 years, Brown has been taking everything he’s learned in the lab and the kitchen, and passing it on to audiences. He burst onto the food television scene in 1998 with his wacky, yet educational food show Good Eats, which earned him critical acclaim and became one of Food Network’s most successful shows.

The show ended in 2011, and Brown continues to be a regular on the Food Network, appearing on shows such as Iron Chef America. He’s also taken his experimental cooking show on the road, with the Eat Your Science tour, which will be served on the Tilles Center stage Thursday, April 28.

Whether on the small screen or the stage, Brown’s forte has always been combining comedy, science and food in an engaging way that will leave audiences more appreciative of the mechanics that go into cooking. Brown doesn’t lecture, instead, he uses live music, audience interaction and larger than life experiments to subtly teach people more about the food they eat.

“There’s a great big storytelling mechanism that can take place within science that makes for some pretty good entertainment. That’s my storyline,” Brown said. “And it plants ideas in people’s heads in regards to cooking and science that they haven’t thought about before.”

While Brown didn’t go into detail about the specifics of the show, he did say the first act would deal with extreme cold, while the second would be about extreme heat. Audience participation is also a huge component. Brown, who was a theater major in college, said doing live stage shows is his favorite thing to do every year. 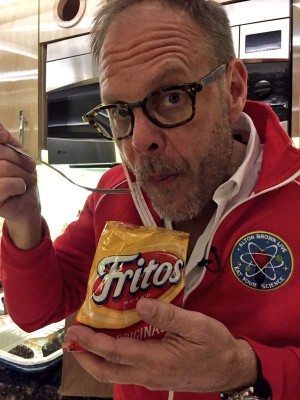 “When you step out on a stage, every night is different. Every audience is different. The interchange is exciting and unique and it’s all about adrenaline,” Brown said, noting that live shows are much more unpredictable than TV, which is always preplanned. “It’s very stressful and creatively taxing. It’s constantly ‘can I do this?’ and then you pull it off and it’s fantastic.”

Fan interaction goes beyond the show and onto social media. Locals along the tour route are encouraged to use the #ABRoadeats hashtag on Twitter and Facebook to tell Brown and his crew where to eat in their town. They’re looking for coffee, breakfast (or doughnut) and lunch stops, as well as a late night dinner place.

“It’s nice because we’re interacting with the fans in that town,” Brown said, adding that they only go to places that are suggested by fans. “It makes every town become real and keeps the tour from being so blah. After a while, the theaters begin to blur, so for me, personally, this is how I remember the cities. Fans love to show off what they enjoy and it’s a nice way to interact.”

“In this day and age, when so much is virtual and online and unreal in a way, we hold onto this connective tissue of food because it’s universal,” Brown said.

“I would say foodie culture is more about communication and media consumption than it is about food. It’s a way for us to connect. Food has become its own form
of media.”

See food come to life when Brown comes to the Tilles Center, April 28, at 8 p.m. Learn more at www.altonbrowntour.com.