Last week Timothy Schell of Schellshock Paranormal Investigations and Removals, based on Long Island, along with some of his research team, Chris Nuara and SaraMarie Koppleman, were invited to the Milleridge Inn in Jericho to do a baseline investigation of claims of spirits and unexplained phenomena. Some of the claims date back decades and some have substantial evidence.

Over the course of decades, guests and staff of Milleridge Inn have claimed to have witnessed unexplained phenomena like doors closing, baby cradles swaying, chairs rocking, full apparitions manifesting, phantom touches and many other paranormal activity. There is a child’s footprint permanently marked in the hardwood flooring on the second floor, which staff claims it continuously reappears, even after the floor has been stripped, sanded and buffed, for many years.

Schell and his team began their investigation in the original room of the home, a quaint living room with mostly original furniture and decorations. Some of the research equipment immediately began to deliver positive results, temperature changes, unexplained camera failure, motion sensors, dowsing wire response, all used to detect spiritual presence.

Several members of Milleridge Inn staff were present for the initial investigation and confirmed some of the “hot spots” around the building that have been reported as having spiritual activity. Schell and his team moved around to the noted hot spots, including rooms on the second floor and in the original tavern, collecting data and preliminary evidence of paranormal activity.

While Schell and his team investigated, a child spirit named Anna made contact in the living room via electronic voice phenomena (EVP) which is audible through a spirit box, a device used by ghost hunters. EVPs are sounds interpreted as spirit voices, usually brief and almost always in single words or short phrases. It is believed that spirit voices are easily carried through static sound. One unidentified male spirit called Schell’s first name through the spirit box communications.

Following this contact, we learned of other second-hand claims of interactions with a child spirit in the hallway and original living room on the first floor. One staff member who has worked for the Inn for more than 30 years and was not aware of our contact with “Anna” told us that she witnessed a fully manifested child spirit sitting in a chair in the hallway one night when she was in the building, working alone many years ago. Claims of a couple dancing in a second floor ballroom and a lady standing at the top of the staircase have also been reported.

While in the tavern, Schell and his team were actively communicating with an unidentified spirit through the spirit box. When asked to demonstrate a presence, the spirit activated one of the sensor strobes which Nuara had placed more than 15 feet away from any physical movement or activity. This evidence was captured on film, witnessed by the investigators and the Inn staff and occurred several times while communicating via EVPs.

“What we are seeing at Milleridge Inn is an abundance of spirit energy,” Schell said. “This is a great location, very rich in history.”

Throughout the investigation, it had been confirmed, all of the paranormal activity that had been experienced over the course of four hours appeared to be neutral or benign; no malicious energy was observed during the preliminary investigation.

“I am sure we have captured some great evidence, but this place deserves a lengthier investigation,” Schell said.

Schell and his team were still analyzing the initial evidence gathered at the time of press. 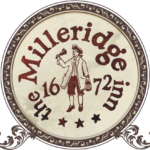 In 1653, a group of settlers from New England, led by a Welsh farmer named Robert Williams, arranged the sale of some 12,000 acres of land with Asslapum, the chief of the Matinecock Tribe of indians. The deal is sealed with 50 pounds of tea, 20 knives, six hatchets, six hoes, six kettles, 30 awl blades and a quantity of clothing. The land, encompassing what is now known as Hicksville, Plainview, Jericho, Woodbury and part of Syosset, includes the parcel that the Milleridge Inn presently sits upon.

In 1672, the building that became Milleridge was started by Mary Willets. It is a tiny house, consisting of two rooms and a central fireplace. One of the rooms and the fireplace still stand today. Its construction remains virtually untouched to this day, although the house has been built up and expanded many times over the course of history.

In the late 1700s, on the brink of war, Milleridge became home to Hessian and British soldiers who took up residence at the Inn, a practice called quartering, for nearly eight years. In 1783, when the Revolutionary War finally ended, Jericho and especially the crossroads at the Inn were heavily travelled through. Elias Hicks opens his home, the Milleridge Inn, as a resting place to travelers. He serves meals and offers floor space for sometimes as many as 20 travelers to open their bedrolls around the hearth for the night.

As the roadways improve across Long Island, Milleridge Inn continues to grow and be a frequent stop-over point for many travelers. It is also rumored to have been a stop on the Underground Railroad, a network of secret routes and safe houses established in the United States during the early 1800s.

Milleridge Inn was maintained as a private home until well into the 1900s.

Visit www.milleridgeinn.com to learn more and to visit, dine and shop.