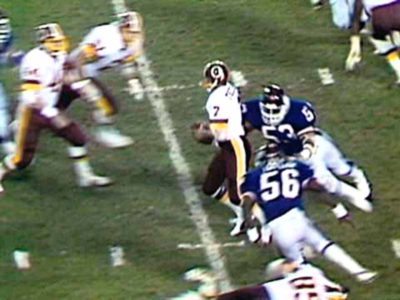 Every so often, athletes sustain terrible injuries for our entertainment. In honor of Halloween, here are four of the most chilling:

As a national television audience watched Monday Night Football during week 11 of the 1985 season, they had the pleasure of hearing Washington Redskins quarterback Joe Theismann’s bones snap thanks to a leg-breaking hit by New York Giants linebacker Lawrence Taylor. It was 43 seconds into the second quarter when Theismann called a flea-flicker—the last play he would ever call—sending the 245-pound ball of hate Taylor barreling toward the quarterback.

As the linebacker pulled Theismann down, it created a pile on, causing Theismann to fall in a twisted mess. Not wanting to deprive football fans of the gore they paid for, the TV camera zoomed in and caught the hideous sight of Theismann’s bone peeking out of his leg. Theismann suffered an open fracture of the tibia and broke his fibula, prematurely ending his career.

Blood On The Ice 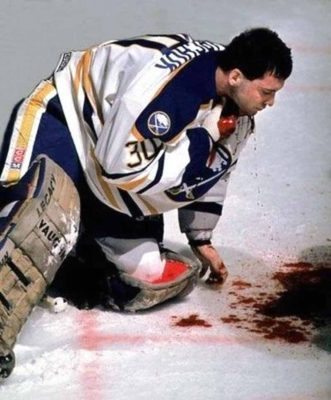 Hockey is a brutal sport, especially when you remember that the players are wearing sharpened deadly weapons on their feet. Buffalo Sabres’ goalie Clint Malarchuk learned the hard way during a game against the St. Louis Blues in 1989 when the skate of an opposing player came up and sliced the goaltender’s jugular vein and carotid artery, resulting in a pool of blood on the ice.

Malarchuk would’ve likely died on the ice had it not been for the quick thinking of his athletic trainer, Jim Pizzutelli, a former Army medic who served in Vietnam. Pizzutelli reached into Malarchuk’s neck and pinched off the vessel, not letting go until doctors stabilized the wound. The on-ice crime scene caused 11 fans to faint, two more to suffer heart attacks and three players to vomit on the ice. 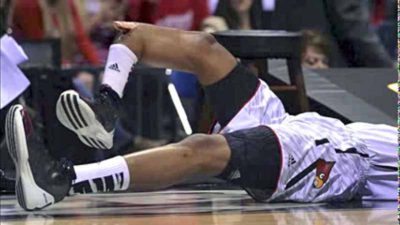 When trolling the Internet for gruesome sports injuries, click on an image of Kevin Ware’s leg injury at your own risk. The guard was playing for the Louisville Cardinals against the Duke Blue Devils in the NCAA’s Elite Eight when he suffered a disturbingly graphic compound fracture of the tibia after attempting to block a three-point shot. 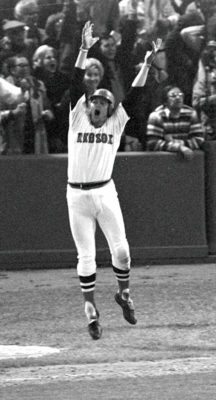 It’s a lazy spring training day in 1974 with the Boston Red Sox squaring off against the St. Louis Cardinals. Carlton Fisk, the Sox catcher, crouches behind the plate when a Cardinal batter fouls off a pitch and sends it rocketing into Fisk’s protective cup. The cup fails at its one job and protects nothing, breaking in half and rupturing one of Fisk’s testicles. The catcher would miss three months and lose one testicle from the bad break.

According to legend, as Fisk was passed out on the field from the intense pain, his teammate and rival Reggie Smith was in the dugout screaming, “I hope you die, motherf***er!” The following year, Fisk proved you only need one ball to hit a dramatic home run in the World Series.

For more from our Halloween theme issue, click here.