Interior designer Jenny Tzakas said there are a lot of different trends for the fall season, but there is one trend that sticks out...
Read more
Healthy Living

How Much Added Sugar Are You Consuming?

New book offers a guide for healthy alternatives Ever wonder the secret behind added sugars? Have you ever wanted to change your eating habits to...
Read more
Healthy Living

Do You Have Stress Brought On By The Pandemic?

If so, here is a step-by-step process to help you get back on track Ever feel that stress is too much to bear? Has the...
Read more
TOP STORIES 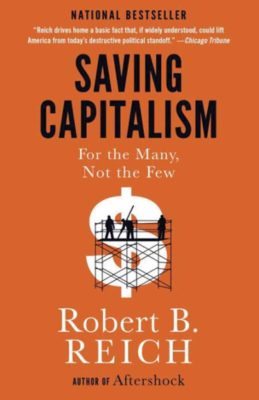 America was once celebrated for and defined by its large and prosperous middle class. Now, this middle class is shrinking, a new oligarchy is rising, and the country faces its greatest wealth disparity in 80 years. Robert B. Reich examines why the economic system that made America strong is suddenly failing us, and how it can be fixed in his latest book, Saving Capitalism.

A leading political economist and bestselling author, Reich presents a paradigm-shifting, clear-eyed examination of a political and economic status quo that no longer serves the people, exposing one of the most pernicious obstructions to progress today: the enduring myth of the “free market” when, behind the curtain, it is the powerful alliances between Washington and Wall Street that control the invisible hand. Laying to rest the specious dichotomy between a free market and “big government,” Reich shows that the truly critical choice ahead is between a market organized for broad-based prosperity and one designed to deliver ever more gains to the top. Visionary and acute, Saving Capitalism illuminates the path toward restoring America’s fundamental promise of opportunity and advancement.

Reich is the Chancellor’s Professor of Public Policy at the University of California at Berkeley and a senior fellow at the Blum Center for Developing Economies. He served as secretary of labor in the Clinton administration, for which Time Magazine named him one of the 10 most effective cabinet secretaries of the 20th century. He has written 14 books, including the best sellers Aftershock, The Work of Nations and Beyond Outrage. He is also a founding editor of the American Prospect magazine, chairman of Common Cause, a member of the American Academy of Arts and Sciences, and cocreator of the award-winning documentary, Inequality For All.