Mom works hard every day to fill our lives with love and happiness. Now it is your turn to pamper mom on her special...
Read more
Calendar

Here is a selected list of things to do and places to see in the Long Island Weekly reading area. Wednesday, May 5 Pro-Nazi Rally The Holocaust...
Read more
Cover Story

Despite the fact that 200-plus million COVID-19 vaccines have been administered, local colleges and universities are taking a broad approach to graduation ceremonies, with...
Read more
Long Island News

On Tuesday, May 4, you can do good while shopping for some of the finest goods around as North Shore Child & Family Guidance...
Read more
TOP STORIES

While the “dance of legislation” continues in our nation’s capital, entertainment venue owners say that their future is bleak without passage of the latest federal coronavirus stimulus bill.

In recent months, Democratic House Speaker Nancy Pelosi and Treasury Secretary Steve Mnuchin have been trying to negotiate an agreement to infuse the economy with more federal aid. Though President Trump has recently  indicated that he favors some kind of stimulus, Senate Majority Leader Mitch McConnell (R–Kentucky) has said he will refuse to bring a large budget bill favored by the Democrats to a vote in the upper chamber. He favors a lower cost stimulus plan.

Within the past month, Senate Minority Leader Chuck Schumer (D–Brooklyn) and Congressman Thomas Suozzi (D–Glen Cove) appeared at Long Island venues to plead for the enactment of the HEROES Act 2.0, passed by the Democratic majority in the House last month.

Schumer was at Mulcahy’s Pub in Wantagh, joined by, among others, Taking Back Sunday’s Shaun Cooper, Blue Oyster Cult’s Albert Bouchard and Michael DelGuidice of Billy Joel’s band and lead singer of his own Big Shot ensemble.

Part of the stimulus bill is a “Save our Stages” or “SOS” Act that would create a $10 billion Small Business Administration (SBA) program to provide grants to eligible live venue operators, producers, promoters, or talent representatives to help cover six months of operating expenses and offset the economic impact of COVID-19.

In a press release, Schumer said, “Long Island would see a lion’s share of this federal pot of funds because of its proximity to the city.”

“We have got to rock and roll on a plan that keeps Long Island’s music and other live venues—along with the local economy—in tune, and this plan will help,” Schumer added. “Independent venues, like those hosted by Mulcahy’s Pub, other concert halls, pubs and more, are the beating heart of Long Island’s cultural life and a driving force of the larger New York economy. These local businesses were among the first to shut down at the start of the pandemic, are struggling to stay afloat, and will be among the last to reopen.”

Though Governor Andrew Cuomo has allowed movie theaters to reopen, he has yet to do so for live concert halls.

According to Schumer, a survey of National Independent Venue Association members “found that 90 percent of independent venues report that they will have to close permanently without federal funding.”

The pandemic economy has already shuttered Revolution Bar & Music Hall in Amityville, which closed in September.

Long Island’s Tourism Bureau reported that tourism is valued at $5.9 billion and generates more than $725 million in state and local taxes.

In a press release, Schumer said “that the independent theatres on Long Island are a cornerstone of the tourism industry and that losing them would be a massive blow to Long Island’s local economy.”

In addition, with the decline of CD sales, live shows provide up to 75 percent of musical artists’ income.

Last month, Suozzi visited the Paramount and was joined by owners and directors of some of Long Island’s prominent entertainment places.

“Independently owned live entertainment venues, as well as musicians, actors, comedians, promoters, stagehands and the local restaurants that count on the business that these venues bring in, have been financially devastated by the pandemic,” Suozzi said. “We are urging the Senate to act on this legislation now. If not, many of our beloved venues might not survive. We can’t let the music die,”

“Remember every $1 spent on a ticket is worth $12 to other businesses in the local community,” said Dom Catoggio, Jim Condron, Stephen Ubertini and Brian Doyle, owners of the Paramount “We were the first industry to close and will be the last to reopen. Music and entertainment can act as a beacon of light and hope during these tough times. Hesitating is not an option—without the legislation an entire American industry that benefits millions is in imminent jeopardy—so please Save Our Stages.”

Laura Mogul, executive director of Landmark on Main Street in Port Washington, said, “We need to prepare for the ‘new normal’ so we can continue to fulfill our mission. We need funding to support large capital expenditures to bring our ventilation system to code. And we must purchase technology that will allow us to livestream our programs until we can reopen.”

“This pandemic is an existential threat to the performing arts industry both regionally and nationally,” said Bill Biddle, executive director of the Tilles Center in Brookville. “The economic impact is wide-ranging, and the result of darkened theaters affects many outside of the arts as well. I applaud Congressman Suozzi’s support and leadership of the Save Our Stages bill and urge the Senate to pass this crucial bill for our industry.”

“The John Engeman Theater has been closed since March 2020 and will, in all likelihood, be closed for 18 months with zero revenue. I applaud Congressman Suozzi for his listening, outreach, and efforts to work across party lines to get this done,” said Kevin O’Neill, owner of the Northport-based theater.

“We cannot—and we must not—let the curtain close on Long Island’s live venues. I will fight tooth and nail here because the shows must go on,” Schumer concluded.

Representatives from The Space at Westbury and the Theatre at Westbury didn’t respond when reached for comment.

About The SOS Act

The Save Our Stages Act (H.R. 7806/S. 4258) is a bill that would create a new $10 billion Small Business Administration (SBA) program to provide grants of up to $12 million to eligible live venue operators, producers, promoters, or talent representatives to help cover six months of operating expenses and offset the economic impact of COVID-19.

These grants can be used for payroll costs, rent, mortgage, utilities, and personal protective equipment, among other needs. The legislation has 28 bipartisan co-sponsors, including Senator Schumer, and is supported by countless artists, performers, and industry advocates. 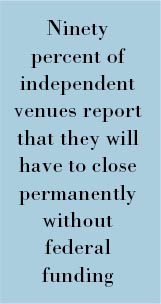 The Heroes Act 2.0 is a COVID-19 relief package that passed the U.S. House of Representatives in October that, per a press release, “reflects the ongoing needs of the American people and House Democrats’ continued willingness to negotiate with Senate Republicans on COVID-19 relief.” In addition to providing much-needed relief to struggling industry and business, Heroes Act 2.0 would also:

• Provide over an estimated $1 billion in aid to struggling cities, townships, and local government on Long Island and Queens;

• Provide $225 billion for childcare and schools;

• Provide $120 billion in aid to the restaurant and catering hall industry;

• Provide $75 billion for COVID-19 testing, contact tracing, and isolation measures, as well as $28 billion for procurement, distribution, and education campaigns for a safe and effective vaccine; and

• Provide a second round of direct economic impact payments of $1,200 per taxpayer and $500 per dependent.