When the pandemic hit, Tony Award-winning playwright Rupert Holmes saw COVID-19 shut down the theatrical world on a broad scale. Closer to home, productions of his including a West End run Curtains, which was coming off a successful 2019 holiday run, plus worldwide revivals of The Mystery of Edwin Drood, came to a grinding halt. Quarantining at his Westchester home in Cold Spring, Holmes started thinking about how to creatively bounce back from this unprecedented global event.

The solution? A one-actor play about late Justice Ruth Bader Ginsburg (RBG).
“I thought if theater was ever going to come back from this abyss, it may be that it has to be with shows that feature one or two actors,” he said. “Some of the most enjoyable plays that I’ve seen have been one- or two-actor pieces. I thought if we’re going to come back, maybe these will be the first arrows we shoot into the air to get back into the world of theater. I thought who would be a good subject for a one-actor play that would be engrossing, enlightening and human? Almost immediately I thought I had to write a play about [Ruth’s] life. And make her a real human being people can get to know through this play. Anyone can read the rulings. Anyone can read the biographical data and get a feel for what drove her whole life. [I wanted to share] what her loves and passions were and why justice was so important to her.” 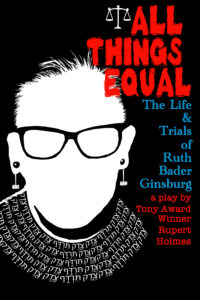 Holmes took a year to research and write this play. Actress Michelle Azar (NCIS: Los Angeles; How to Get Away With Murder) was tapped to play RBG. In finding the right format, actress and subject to work with, the former Levittown resident wound up creating a piece that is warm, personal, intimate and focused.
“When I write a play, I want to envision it being performed,” he explained. “I don’t want to write a play and look at the letters on a page. Unless there’s an audience and a venue, it isn’t a play. This was a play that I could see happening in an intimate setting. I thought for a one-actor play, who better than Ruth Bader Ginsburg in this particular time? It’s a chance to make people understand what her life was about, beyond just the iconic nature of her notoriety and a chance to show that she was more than just the Notorious RBG that had become a catch-phrase; the kind of thing Saturday Night Live would spoof.”

To that end, Holmes was happy to share some of his favorite plays. 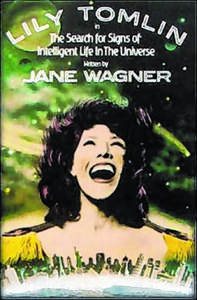 The Search for Signs of Intelligent Life in the Universe (1985)
“This Lily Tomlin one-woman performance kind of made me realize that you could go on quite a journey with one person performing a show.” 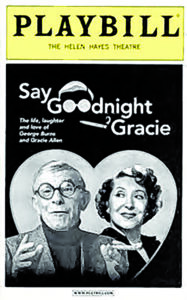 Say Goodnight Gracie (2002)
“When I wrote Say Goodnight Gracie, George Burns had lived to be 100. I realized that if I wrote the story of his life, I would also be writing a very definitive history of American entertainment. He was in every entertainment form the United States had. He went from singing on the street for pennies to vaudeville. He was 30 years old when he met Gracie Allen. He had already been in vaudeville more than 15 years. He was a kid in vaudeville. Then they were the toast of vaudeville and then vaudeville started dying. They made the leap very people made from stage to radio. They had one of the most popular radio shows of the time. They became national phenomenons. Gracie Allen ran for president as a joke and got quite a number of votes. They were also making some of the first talkies that were ever made in the early ‘30s. They mad motion pictures with people like Fred Astaire and W.C. Fields. Again, they did a very difficult thing—they went from radio to television. It was an incredible transition. When George and Gracie split up, he was able to leave TV and somehow make a leap to movies. He won an Oscar at age 80 and he even had a hit record on the Top 40 at age 80-something called ‘I Wish I Was Eighteen Again’ in the country category. Outside of having a video made about him, George Burns was the history of American entertainment. You get to travel through that history and the life of a very persistent man. I admired his life and I happened to admire that play.” 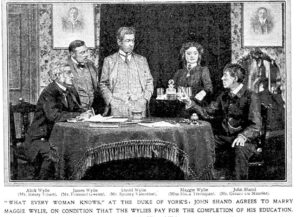 What Every Woman Knows (1908)
“What Every Woman Knows was written by James Barrie, who was the author of Peter Pan. He wrote a play that was basically about the woman behind the man. It’s about a young Scottish woman and like Ruth Bader Ginsburg, it’s the brothers who are going to get the education in the household. She starts stealing their books and makes sure that she reads everything that they read. She finally marries a politician and does for this politician in England what Marty Ginsburg did for Ruth—that is support him. Finally, the politician in the play rises to such heights that he feels like he can do without her. He leaves her and suddenly he notices he’s not making any good speeches anymore, because she was supplying him with all his ideas and philosophy from behind the scenes. I happen to love that play quite a big deal because it was an early feminist advocacy play that pointed out that women know very often that when men get good ideas, they’ve often gotten them from their wives and female friends.”

All Things Equal: The Life and Trials of Ruth Bader Ginsburg will be running through Nov. 27 at the Bay Street Theater & Sag Harbor Center for the Arts, 1 Bay St., Sag Harbor. For more information, visit www.baystreet.org or call 631-725-9500.