Rocking Out For Wounded Warriors

Consider these recommendations for upcoming virtual talks, readings and more in and around New York City: The Tyranny of Merit: What’s Become of the Common...
Read more
TOP STORIES

Gary Puckett and the Union Gap may have enjoyed their heyday from 1967 to 1969, but it hasn’t kept these 1960s pop legends from touring and also giving back. On Oct. 14, Puckett and the Union Gap will be headlining an oldies bill at Roslyn High School as part of Roslyn Rocks for the Wounded Warriors. Proceeds will go to Nassau County Fire Fighters’ Operation Wounded Warriors, which provides free programs and services to address the needs of wounded warriors and fill gaps in government care. The demand for its programs and services has grown from serving a handful of injured veterans to now serving tens of thousands. The organization continues to receive hundreds of new registrations from injured veterans, their families and caregivers each month. And it’s a worthy cause that Puckett is happy to raise money for.

“I’m always pleased to see that we’re doing something for those who are America’s Finest, as I like to call them,” Puckett said. “I also do a tribute to veterans that’s been part of my set since way back in 1984 on the very first Happy Together Tour.”

Founded in 1967 by Puckett, the Union Gap enjoyed a string of five Top 10 hits for the next two years. Like any other oldies act, Puckett promises to keep the nostalgia flame burning bright with those much-loved songs serving as the creative kindling for anyone coming out to see his band.

“People want to hear the music of their youth and the music that they expect from me. I play all the hits and we play a lot of the songs that were on the first three albums for the Union Gap,” he explained. “It’s built around music that they may recognize but were not necessarily our songs—though I do all the hits—‘Woman, Woman,’ ‘Young Girl,’ ‘Lady Willpower,’ ‘Over You,’ ‘This Girl Is a Woman Now.’ But we also do some songs like The Bee Gees ‘To Love Somebody’ and Bob Dylan’s ‘Mighty Quinn,’ because it’s so much fun. We do songs that everybody knows and loves.”

The son of two musicians who started out playing in Dick Halverson’s Big Band as high schoolers, Puckett’s musical introduction began early. Piano lessons started at the age of six where he learned about the three B’s—Beethoven, Bach and Brahms. Born in Hibbings, MN (birthplace of Bob Dylan), Puckett moved to Yakima, WA, with his family while still a teenager. A chance discovery of a guitar in his grandparents’ attic, plus an affinity for an array of 1950s rock and rollers including Elvis Presley, Carl Perkins, Eddie Cochran, Little Richard and Jerry Lee Lewis, had the aspiring musician looking to this as a viable career choice by the time the Puckett clan relocated to Southern California in the early 1960s. While balancing college and working a day job, Puckett created a portfolio with lyrics, band pictures and a demo and started shopping it around to different labels. An encounter with Jerry Fuller, an A&R man who penned Rick Nelson’s “Traveling Man” and was starting a new gig at Columbia Records, led to Puckett’s getting signed. The ambitious young musician then came up with the Civil War motif for his new group. 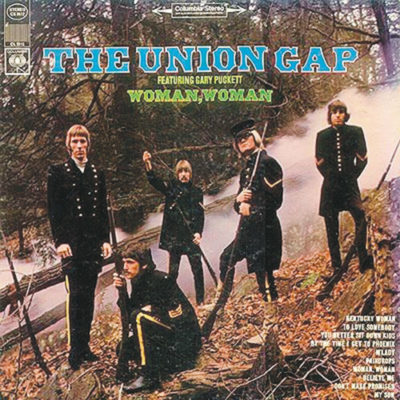 “I knew that it was a very competitive business and everybody wanted to be on the Top 40 and to get on the Billboard Hot 100 chart. So I thought we might want to go for a visual image along with a record that we might be able to make. [The idea was that] maybe somebody would look at it, be curious and wonder what the record sounded like and that’s exactly what happened,” he recalled. “One day it occurred to me that maybe we could wear Civil War outfits and thereby be the same but be different. I took the band down from Seattle to Portland [OR] and then onto Vallejo [CA]. From there, we went to a place in Los Angeles, called Western Costume and rented one Civil War outfit. I then took the band to Tijuana, Mexico, and had a little tailor make these spectacular outfits for us.”

Hits rolled in over the next couple of years and the band shared bills with acts ranging The Buckinghams and the Grass Roots to the The Association and The Beach Boys. Fuller’s controlling ways in the studio led to creative chafing that came to a head when Puckett and the band refused to play on a 1969 recording session featuring a 40-piece orchestra the producer arranged to have play on the song. The date was canceled and Fuller never worked with the group. And while Puckett admits he might not have been ready to take the lead with his group, he also pointed out that tastes and times were changing.

“I made some poor decisions at a very bad time when things were changing,” he said. “The ‘60s were becoming the ‘70s. People were changing their attitudes, their minds, their music, their drugs—they were just changing and moving on.”

Gary Puckett & The Union Gap will be appearing as part of Roslyn Rocks for the Wounded Warriors on Oct. 14 alongside Jay Siegel’s Tokens, Emil Stucchio & The Classics plus The Devotions. The event takes place at Roslyn High School, 475 Round Hill Rd., Roslyn.

Previous articleIn The Kitchen: Simmer Down With Hilary Duff
Next articleNassau Agencies Unite To Aid Victims Of Hurricane Maria In Puerto Rico