They Robbed Banks And Innocence

What’s perhaps most striking in viewing the 1967 classic Bonnie and Clyde 50 years after it shook up the film industry is not how engaging it remains, but how compelled the viewer feels to root for the film’s title crooks throughout their streak of bank robberies, murders and callous deceptions. While based on the lives of the notorious Great Depression-era criminals Bonnie Parker and Clyde Barrow, the film took some narrative liberties for the sake of further developing the relationship between the title characters, portrayed by Faye Dunaway and Warren Beatty, respectively.

When Bonnie meets Clyde, she is immediately attracted to his appetite for larceny and other daring situations, which she sees as an escape from her monotonous life as a waitress. Clyde has no interest in romance; by his own admission, he “ain’t no lover boy.” His fixation with Bonnie is strictly for practical reasons—he needs a partner in crime, and he sees something in her that others have failed to recognize; namely, intelligence and savvy. Unsuccessful in their first few attempts at garnering sexual chemistry, Bonnie and Clyde’s relationship nonetheless continues to grow on an emotional level, so that each bank job they pull resonates as a meaningful shared experience between the two characters. 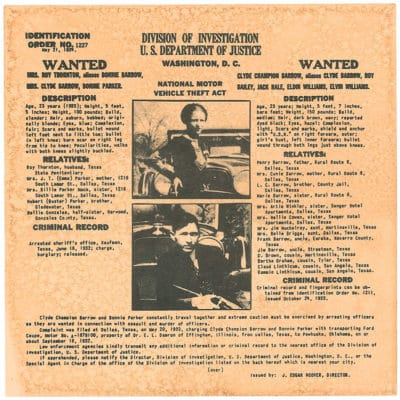 Of course, it helps the film’s cause that Beatty and Dunaway pulled the neat trick of instilling the two outlaws with humanity. When Clyde recruits his brother Buck (Gene Hackman) and Buck’s wife Blanche (Estelle Parsons) to aid in their crime spree, Bonnie resists, in part because she feels the skittish Blanche is holding them back, but also because their involvement is cutting into her alone time with Clyde. Elsewhere, when Bonnie is homesick, she and Clyde visit her mother, and Clyde talks optimistically of ending their crime wave when the Depression finally ends and settling into a carefree life with Bonnie. Indeed, Bonnie and Clyde are so immensely likable that, after a robbery that was botched due to a mistake by their getaway driver C.W. Moss (Michael J. Pollard), the viewer is led to root for the duo’s escape, nearly forgetting that Clyde shot an innocent man in the face moments earlier.

Bonnie and Clyde’s impact is still being felt in the film industry. Beatty, already an established star when the film was released, ascended to an even higher degree of acclaim, becoming one of the most noteworthy figures in Hollywood.

The film also shot Dunaway to stardom and launched Hackman’s career at the belated age of 37. But its primary innovation was its candid, and perhaps gratuitous, portrayal of violence on screen. Though some critics have admonished the film in subsequent years for opening up the floodgates to excessive bloodshed in movies, Bonnie and Clyde has remained a fixture because of its refusal to sacrifice narrative depth and complexity for gimmicks. Producer Beatty and director Arthur Penn recognized that if Bonnie and Clyde’s story wasn’t told with guts, it needn’t be told at all.