EntertainmentBooksMike Barry - Eye On The Island

AJ Mendez Brooks’ memoir has got my vote for one of 2017’s best book titles. It is called Crazy Is My Superpower: How I Triumphed by Breaking Bones, Breaking Hearts, and Breaking the Rules (Crown Archetype).

Known as AJ Lee to fans of World Wrestling Entertainment (WWE), Mendez Brooks is kicking off her book tour on Tuesday, April 4, at Book Revue, 313 New York Ave., in Huntington. She’ll be speaking, and then signing Crazy is My Superpower, starting at 7 p.m. On the following night, Wednesday, April 5, at 6 p.m., Mendez Brooks will be making a promotional appearance at Barnes & Noble, 97 Warren St., in lower Manhattan.

The WWE has millions of fans worldwide, and individuals with WWE pedigrees are ascendant in 2017. Here are two additional examples: Linda McMahon, WWE’s co-founder and its chief executive officer (CEO) from 1997 to 2009, is today the administrator of the U.S. Small Business Administration (SBA) and the White House’s current occupant is in the WWE’s Hall of Fame. But let’s return to Mendez Brooks.

“Writing this book was the hardest and scariest thing I have ever done,” Mendez Brooks writes on her website, “In its pages lie the worst mistake of my life, the best day of my life, a deeply personal photo album, stories of heartbreak, stories of true love, and secrets I’ve kept for far too long.”

A New Jersey native, Mendez Brooks enrolled in New York University’s (NYU) creative writing program before dropping out for family and financial reasons, according to the promotional material released in advance of her memoir’s publication. To learn how someone goes from NYU to WWE stardom, you’ll have to buy the book, and many people will. For instance, another WWE star, Long Island’s own Mick Foley (a/k/a Mankind), saw his 2000 memoir, Have a Nice Day—A Tale of Blood and Sweat Socks, land atop the bestseller list soon after its release. That fact is mentioned to this day at Amazon’s website with a degree of astonishment. 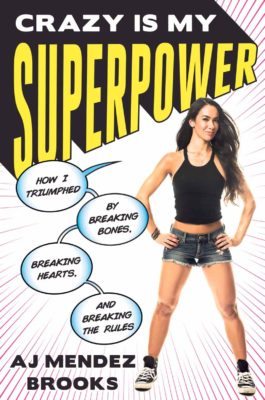 More than a decade later, in 2011, AJ Lee debuted on WWE’s Smackdown program and quickly become a fan favorite with her energetic, athletic performances. Indeed, Lee went on to become a three-time WWE Divas champion, the category in which all of the WWE’s women superstars compete. Since WWE is also a soap opera for men, AJ Lee’s character was scripted to enter into supposed romances with other WWE luminaries, such as Daniel Bryan, John Cena, and CM Punk. The WWE’s writers must have sensed chemistry between AJ Mendez Brooks and Phil Brooks (a/k/a CM Punk) because they are now married to one another, in real-life. The couple resides in Chicago.

Mendez Brooks, who will celebrate her 30th birthday this month, has more than four million Twitter followers, too, where she describes herself as an “Animal Avenger, former wrestling champ, and foul-mouthed gamer.” The first and last items reference her work as an animal rescue ambassador for the American Society for the Prevention of Cruelty to Animals (ASPCA) and with Girls Make Games, a program encouraging young women to pursue science and tech-based careers.

“This is not a cautionary tale. This is not a memoir that will shame my mistakes and delicately guide you down a better path,” Mendez Brooks writes, adding that her book urges readers “To embrace your ‘crazy,’ your ‘weird,’ your ‘weakness,’—the things that others will mistake as flaws but will end up being your greatest strengths.”