When Baltimore Orioles second baseman Davey Johnson flew out to New York Mets outfielder Cleon Jones in the top of the ninth inning of Game 5 of the 1969 World Series, the Mets wound up capping off an incredible season with a world championship. New York became the first MLB expansion team to win a division title, the pennant and a World Series. Five decades later, the surviving members of that team will come out to Citi Field (the spiritual heir to the late Shea Stadium) on the weekend of June 28-30 to commemorate the 50th anniversary of that historic World Series win. For three players in particular—Ed Kranepool, Art Shamsky and Ron Swoboda—it was a special squad whose fortunes lined up at a very special time in history.

“I think we caught the world by surprise and the timing of it was great, so people really look at it because the world was in some turmoil. You had the Vietnam War, people walking on the moon, Woodstock—you had a lot of things happening at one time,” Kranepool said. “And of course us catching everybody by surprise. It was a miracle when you come from last place and turn it around to become world champs.”

“It was one of those teams that people remember how we helped them during really difficult times in the late ‘60s. It was an awful time in this country. The war in Vietnam was tearing up this country. The city of New York was really going under financially, spiritually and socially speaking. We made people forget about their problems for a brief period of time,” Shamsky explained. “They passed that on from generation-to-generation. One of the things that resonates with people 50 years later is we made them believe there was light at the end of the tunnel. If we could win, anybody could win. I think that’s carried on throughout all of these years.”

While the Mets finished in ninth place (the team’s best finish since their 1962 inception) with a 73-89 record, that season also marked the debut of manager Gil Hodges, who was brought in to replace Salty Parker. According to Swoboda, the seed for self-confidence was planted by Hodges before the 1969 season started.

“I think we felt like, if we were being completely rational, we felt like we would be better. We had won 73 games the year before so that didn’t presage a World Series or division win. Major League Baseball had expanded the leagues in 1969 and now there were divisions—east and west—in both leagues,” Swoboda explained. “Gil Hodges said to us during spring training ‘I think this team can win 85 games’ and I think we looked around at each other and went ‘Us?’ We thought we would be better, but I don’t think anybody envisioned a run towards 100 wins in any way, shape or form.”

Indeed, despite having an ignominious start to the season via an 11-10 Opening Day slugfest defeat to the Montreal Expos, April’s 9-11 record would be the only sub-.500 month of the season for New York. To a man, Hodges’ firm and disciplined leadership as the club skipper was credited with being the catalyst to this miraculous ‘69 run.

“Gil was always ahead of the curve. Early in the game, he’d be thinking about what was going to happen late in the game and anticipated making strategy. He was never going to be second guessed. He was always going to do the thing that was going to make you win, unlike other managers would out-think themselves or wouldn’t prepare for what was going to happen late in the ball game,” Kranepool said. “They might use up their players and not anticipate making a change. The important thing was that everyone knew their roles and was prepared. That’s what he relied on—being prepared for the other team. He was very strict and he had his ideas about how to play the game. Obviously, he liked to platoon and he did that and never fooled anybody. That was his thinking. He played that way all through the playoffs and World Series.”

Shamsky added, “Gil was a really good tactitioner in the sense that he knew the game and had a feel for the game. He knew the guys at the end of the bench. He knew at some point, he would need them by the end of the year. He got everyone involved, platooned four positions all the time and occasionally, behind the plate. Half of the team was platooning and getting a chance to play well. It was a great situation for all of the players, me included. It was working because of our respect for Gil and his managing ability. We all understood the situation. While it wasn’t great for our careers, it was working and it was one of the things that helped us win the division, pennant and World Series.”

By around June, the Mets and their faithful felt the team had a chance to make a major move. Particularly after acquiring slugging first baseman and future World Series MVP Donn Clendenon in a June 15 swap with the Expos.

“There were a lot of ups and downs. We started getting better, but there was this sense that we were continuing to get better and we can’t get past the Chicago Cubs. So that was a little frustrating that we could end up being the pumpkin in somebody else’s Cinderella story,” Swoboda said. “We ended up progressing enough, though, that we ended up catching the Cubs and passed them in early September. We were on our way and it was really exciting stuff. We didn’t have any baggage. We weren’t crippling under the weight of responsibility. We just needed to play.”

While the Mets were still 10 games out by the middle of August, Kranepool credits a late season run with setting the table for post-season glory.

“We had a tremendous run down the stretch—I think we were 38-11 in our last 49 games,” he said. “We swept everybody we had to play and took every series. We didn’t back into it. When you win 100 games, you’re supposed to win it.”

The Mets finished 100–62, eight games ahead of the Cubs. They went on to sweep the National League West champion Atlanta Braves three games to none in the inaugural National League Championship Series. While New York eventually defeated the American League champion Baltimore Orioles in five games, the series got off to a poor start when staff ace Tom Seaver was handed a 4-1 Game 1 loss. 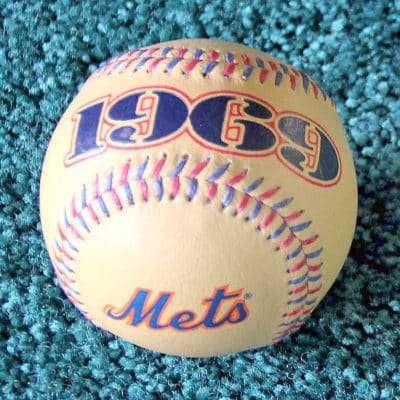 “We lost one and no one was surprised. They beat Tom Seaver. Hodges, who didn’t say a lot, but when he spoke, it resonated, said ‘Just remember, fellas: You don’t have to be anything but the team that got you here. You don’t have to be anything but the players who got us here. You don’t need to swell up now and try to be bigger than life. Don’t try to be better than yourself. Just be the players that were good enough to get us here,’” Swoboda recalled. “I thought that was a spot-on, amazing way to put it. We never lost another game.”

For Shamsky, it’s no surprise how much 1969 means to Mets fans.

“It’s true that people focus on that year because of what it meant. I run into young people who weren’t even born in that year, but they know what it meant to their parents and grandparents. It has this special meaning to people and will be passed on for years from now, too,” he said. “It was one of these special teams that did something really great for New York and the country at a time when a lot of things were going on—a really bleak time in our history—and people remember those good times of what we did. For me, on a personal level, that’s very special.”