In New York City and Long Island, the company will be distributing funds to seven nonprofits to help provide critical aid and resources to communities.
Read more
News

Television cooking shows are about as ubiquitous these days as food itself, but for generations of home chefs, the kitchen gold standard is and will always be Julia Child.

A celebrity chef decades ahead of her time, Child is well known for her forays into cookbooks as well as the fledgling television industry with her instructional celebrations of French cuisine boiled down to the basics for mass consumption by stay-at-home cooks. Offered with whimsy—and a whole lot of butter—Child’s fundamentally sound cooking programs became must-see TV throughout different iterations from the 1960s through the early 2000s. As the chef would have been 106 on Aug. 15, late summer is the perfect time to celebrate the legend’s contributions to the culinary and cultural tablescape.

“One of the most fantastic things about Julia and the reason she has so much resonance today is that she was so accessible and relaxed and made cooking fun and got a new generation back into the kitchen after they left the kitchen,” said Tanya Steel, director of the Julia Child Award, created by the Julia Child Foundation for Gastronomy and the Culinary Arts in 2015 and given to individuals or teams who have made a profound and significant difference in the way America cooks, eats and drinks. “Julia provided home cooks permission to get into the kitchen and sometimes screw up and get messy, but try again and master it. She gave people, not just the passion, but the confidence to cook.”

Julia Carolyn McWilliams was born on Aug. 15, 1912, in Pasadena, CA, and would go on to build an empire on accessible French cuisine. Her formative years were spent traveling the world, witnessing watershed moments in the food world. One such stop was Tijuana, Mexico, in 1925 where she met Caesar Cardini, the Italian-American-Mexican chef who invented what, at that time, was becoming a sensation in America: the Caesar Salad. Years later, Child would help popularize the salad with Cardini’s daughter Rosa, on one of her cooking shows.

Another noteworthy food moment for Child came in 1948 during Child’s six-year adventure living in Paris, Marseilles, Germany and Norway with her husband Paul. While spending time in Rouen, France, Julia and Paul dined at La Couronne, a restaurant that is part of the oldest inn in France, having been founded in 1345. The meal would prove to be an inspirational flashpoint for Child, nudging her toward a life of mastering French cuisine. The meal—six oysters, sole meunière, green salad, fromage blanc with berries and coffee, accompanied by a half bottle of Pouilly-Fumé—is still available at the restaurant as the Le Menu Julia Child ($95 plus wine). In her 2006 memoir published after her death, My Life In France, Child wrote that the lunch, “was the most exciting meal of my life.”

The meal led Child directly to enroll in the famed Parisian cooking school, Le Cordon Bleu, graduating in 1951. The very next year, Child began working with two French women, Simone Beck and Louisette Bertholle, on a cookbook about French cuisine specifically geared toward Americans. After many rejections, Mastering the Art of French Cooking, Volume One was published in 1961. The book made Child a household name seemingly overnight. By 1962, she had her own local cooking show, The French Chef; by 1963, the show went national. Over the next few years, Child would win a Primetime Emmy Award for the cooking program and also grace the cover of Time magazine, which dubbed her, “Our Lady of the Ladle.” 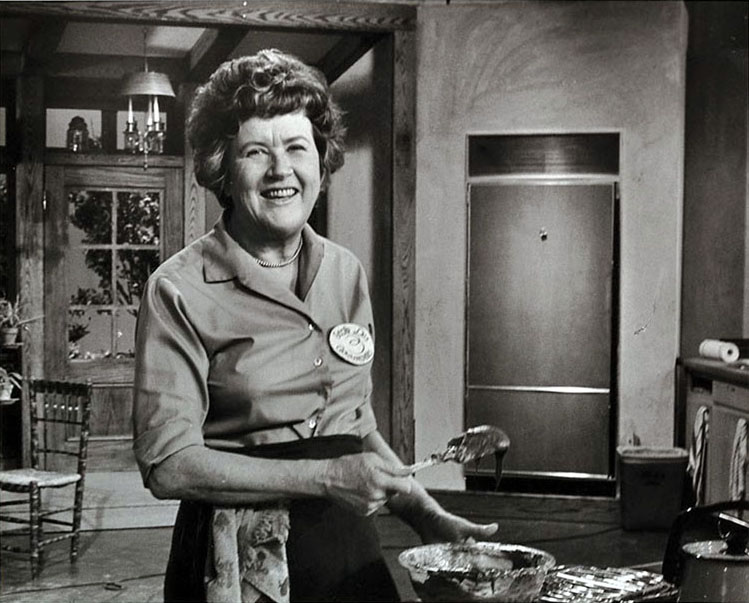 Child would then set off on a three-decade run as the most important home chef in the industry. Her various cooking shows airing on PBS would serve as the precursor to every single talk show cooking segment and Food Network personality that would ever cook their way onto television screens. Besides merely influencing other cooks, she would even have a hand in creating them.

“Julia created a groundswell for consumers to be incredibly passionate about cooking and the culinary lifestyle, to the point where now there is an entire industry built on gastronomy. She awakened that in Americans’ lives,” said Steel, who first learned of Child as a youngster watching those PBS cooking shows and would build a career of her own in the food world as a writer and editor with the New York Times, Epicurious, Bon Appetit, Mademoiselle and Food & Wine. “I turned on PBS and saw this tall woman with a high voice slapping chickens. I was mesmerized as a kid.”

Child’s approach was always that of affable teacher, this earned her many accolades throughout her later years. In 1993, Child was the first woman inducted into the Culinary Institute of America’s Hall of Fame, one of several distinctions she would receive from the school, including an honorary Doctorate of Fine Arts and the school’s first Lifetime Achievement Award. The Smithsonian Institute in Washington D.C. even displays her original kitchen, which was designed by her husband to accommodate her tall stature.

“She was youthful and passionate and fun. I met her when I was with Food & Wine magazine. I was three offices over and I heard that unmistakable voice. She came into my cubicle and shook my hand and it was an amazingly impactful moment in my life. Each time I met her it was such a blessing. She was so fun-loving,” said Steel. “And at restaurants she used to always go into the kitchen and thank every single person on the staff. There are so many stories of her doing that and they are all true.”

Julia Child’s life was one that was full of flavor—and we didn’t even talk about her time working in the 1940s for the U.S. government’s Office of Strategic Services, the forerunner of the CIA, where she had top security clearance. Considering all she accomplished—both top secret and otherwise—the final line in her 2006 memoir reads like a rich, buttery sauce.

“And thinking back on it now reminds me that the pleasures of the table, and of life, are infinite—toujours bon appétit!”