The Hold Steady: Aging With Grace

The Hold Steady – Teeth Dreams (Razor & Tie) – With the release of its sixth studio album, The Hold Steady has been holding hipsters in its thrall for a full decade. And while the band has become known for character-driven narratives penned by frontman/founding member Craig Finn inspired by the likes of Bruce Springsteen and Paul Westerberg, detractors have been griping about Finn’s decision to write about characters trying to age gracefully. Add in the departure of keyboardist Franz Nicolay back in January 2010 followed by the release of the band’s poorly-received fourth album Heaven is Whenever later that year and the quintet is poised for a big bounceback. 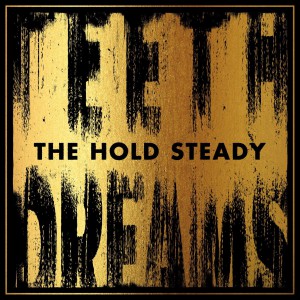 The Twin Cities continues to serve as the launching pad for a number of fictional figures whose ranks have included the likes of punks Hallelujah and Charlemagne in the past. The Cityscape Skins gang returns in the opener “I Hope This Whole Thing Didn’t Frighten You,” which gallops along as founding member Tad Kubler and ex-Lucero fretman Steve Selvidge, (making his debut on a Hold Steady album), trade gnarly riffs throughout.
Finn’s stories are populated with lots of lost souls be it the gal who’s been smoking butts since she’s seven (a gamboling “Big Cig”), the guy who works in a tire shop with an upside down cross on his arm (the swirling narrative “The Ambassador”) and the jittery junkie (a strutting “Runner’s High”). But it’s towards the end of this economical 10-song set that Finn hits his stride. All the macho guitar wrangling that comes before winds up taking a backseat as he exposes an admirable amount of vulnerability in the gorgeous and ethereal “Almost Everything” (Yeah there are nights that I get terrified/I’m sure you get terrified too/So hey won’t you show me a sign/If I’m getting through to you/I’m still pretty into you). Wrapping it all up is “Oaks,” a nearly nine-minute opus that unwinds like a Felliniesque dreamscape that weaves in images of tree limbs, balloon houses and bodies as stoplights while Kubler’s chords languidly drift along. The band’s early fans may bitch about Craig Finn refusing to remain in stasis circa 2005, but it’s his willingness to deal with that everyone IS getting older that’s allowed The Hold Steady to rebound so nicely on this latest effort.

The Hold Steady will be appearing with The Replacements and Deer Tick on Sept. 19 at Forest Hills Tennis Stadium, 1 Tennis Place, Forest Hills, www.foresthillsstadium.com