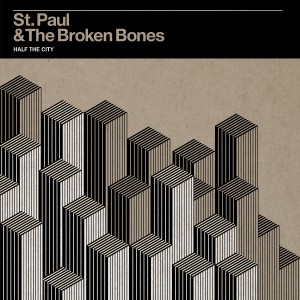 St. Paul & the Broken Bones — Half the City (Single Lock) — In the annals of classic soul, the church has always been a launch point for many a legendary vocalist. So it goes with frontman Paul Janeway, the namesake and frontman for his southern outfit St. Paul & the Broken Bones. Raised in a non-denominational Pentecostal-leaning local church, whose influence meant the only secular music he could listen to at home was Sam Cooke and The Stylistics, Janeway attacks each and every one of the dozen songs on this debut as if he were testifying before a congregation. Produced by Ben Tanner of the Alabama Shakes, Half the City pulses with an analog vibrancy that finds it residing at the stylistic intersection of Muscle Shoals, Hi Records and Stax/Volt. But rather than Otis Redding or Al Green being the touchstone for Janeway’s channeling of the musical Holy Spirit, it’s the late Solomon Burke who seems to be guiding the native of the small town of Chelsea, Al. While the opener “I’m Torn Up,” opens with the gentle nudging of brass, it’s clear that St. Paul has had his heart stomped on pretty thoroughly. From here, he and the band swing like Sharon Jones and her Dap-Tones (“Don’t Mean a Thing”), defiantly try to buoy their spirits with a soul shuffle (“Sugar Dyed”), and are about as down and out as James Carr at the dark end of the street (“Broken Bones & Pocket Change.”) Elsewhere, on the exhilarating “Dixie Rothko,” within the span of three and a half minutes, this razor-sharp septet builds on layers of escalating organ runs and brass arrangements to the point where Janeway is going from a soulful croon to the kind of pleading where he’s shredding his vocals while declaring, “I know we’re going to make it,” while Browan Lollar does his best Duane Allman. By the end of the album when the despondent singer is confessing how bad he’s been, the dulcet arrangements of the Broken Bones horn section carry you right back to hitting the play button again for another much-needed round of musical rejuvenation.