Lucinda Williams: Down Where The Spirit Meets The Bone

The quintessential in-demand sideman, G.E. Smith has played a significant role in the kind of seminal music happenings that make him the musical equivalent...
Read more
Arts, Music & Entertainment

Lucinda Williams – Down Where the Spirit Meets the Bone (Highway 20/Thirty Tigers) – In deciding to start her own imprint, Lucinda Williams continues her iconoclastic ways by coming out of the gate big with a 2-CD set at a time when many artists are digitally releasing songs and leaning on touring for income. But given her enormous talent, it’s not surprising that these 20 songs that stretch out over one hour and 40 minutes is all killer and no filler. So with all of the creative cards fully in her hand, the newly-minted label owner fulfilled a longstanding wish to set a poem written by father/literature professor Miller Williams to music. 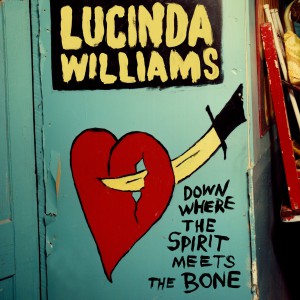 The opening cut, “Compassion,” has the cadence of a murder ballad stripped down to Lucinda Williams and solo acoustic guitar accompaniment that has a world weary aura hanging over it.  From here, the Louisiana native drawls her way through swamp rock that would do Tony Joe White proud (the twang-soaked “Protection”), endearingly pledging her love (the Harvest-like outtake “Stowaway in Your Heart”) and even giving a girlfriend an emotional hand up (an upbeat “Walk On”). That said, Williams isn’t afraid to call out those who’ve done her wrong be it a unfaithful letter (the coldly seething “Cold Day in Hell”), the trio of teens railroaded in the 1993 murders of three Arkansas boys (a laconic “West Memphis”) or classic tear-in-your-beer sentiment (the honky-tonk ballad “This Old Heartache”). Best of all is a near-10 minute reading of the late J.J. Cale’s “Magnolia” that has an ethereal haze hanging over it thanks to the elegant and minimalist support of guitarists Bill Frisell and Greg Leisz, both of whose strumming wraps their singer’s vocals in a gauze of delicate riffs and chords. And not unlike the current Lucinda Williams current canon, Down Where the Spirit Meets Bone is a clear case where consummate craftsmanship meets undying passion that’s a delight to immerse yourself in.