Little Feat: A Moment In Time Playing Live In Holland

Little Feat – Live in Holland 1976 (Eagle Vision) – Evolving out of the absurdity that was Frank Zappa’s Mothers of Invention by way of founding members Lowell George and Roy Estrada, Little Feat never quite fit into the southern rock box despite having a sound that employed liberal amounts of boogie, blues, rock and country. 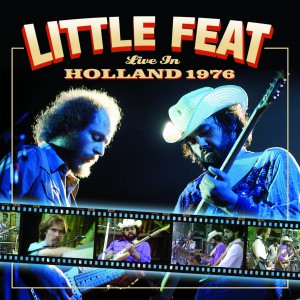 This set recorded at Holland’s PinkPop Festival features George at the top of his game leading guitarist Paul Barrere, percussionist Sam Clayton, bassist Kenny Gradney, drummer Richie Hayward and keyboardist Bill Payne through an absurdly tight set of Feat favorites.
Opening with a slinky and righteously funky “Skin It Back,” the tone is set from the start thanks to Payne’s sinewy keyboard runs, the slide-fueled riffs tossed off by George and Barrere and the syncopated might of Gradney, Hayward and Clayton. From here, the sextet shifts gears into the N’awlins-flavored second line shuffle “Fat Man In the Bathtub,” rollicking sing-a-long “Oh Atlanta,” and the rave-up “Teenage Nervous Breakdown,” which closes out the album.
The tour de force of this set is five minutes of a loping “Cold Cold Cold” that wends its way into a swaggering “Dixie Chicken” that runs around ten minutes and eventually eases into a seven-and-a-half minute “Tripe Face Boogie.” It all winds up being a snapshot into the in-concert might of Little Feat at what was arguably the band’s peak.

Paul Barrerre and Fred Tackett of Little Feat will be performing on Friday, Aug. 15 at the YMCA Boulton Center for the Performing Arts, 37 W. Main St., in Bay Shore. For more information, please call 631-969-1101 or visit www.boultoncenter.org