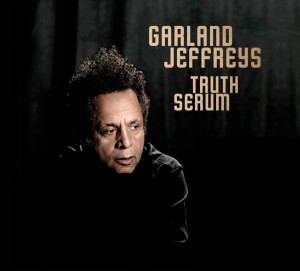 Garland Jeffreys — Truth Serum (Luna Park) — There was a point when Garland Jeffreys was banging out a string of solid albums in the late ’70s/early’80s when he was part of the class of urban singer-songwriters with a distinct New York City swagger that included Ian Hunter, Graham Parker and longtime friend Lou Reed. The past two decades found the Brooklyn native and his wife raising a kid while Jeffreys stepped away from the studio. With his daughter on the brink of college, the Syracuse University alum put out new music in the form of 2011’s most excellent The King of In Between, his first domestically released studio album in nearly two decades. Thankfully, he didn’t wait too long for a follow-up and clearly the inspiration of making new music has done wonders for Jeffreys on Truth Serum. As has been the case throughout his career, the biracial singer-songwriter has always cast his stylistic net wide and it’s no different on these 10 songs. The opening cut is a title track steeped in the loping blues and wailing harp of vintage Chicago blues, setting the table for his being a soothsayer throughout the remainder of this record, whether it’s the organ-fueled “Colorblind Love” where he muses, “Colorblind love/It’s what I’ve been dreaming of/Fits like a hand in glove/Ain’t no dream like colorblind love” or the stripped-down “Revolution of the Mind,” which is reminiscent of his old buddy Bob Marley’s “Redemption Song.” Elsewhere, Jeffreys delves into reggae once again with the chugging “Dragons to Slay,” preaches peace in the Bonnie Raitt-meets-Bruce Springsteen gem that is “Any Rain” and gets wistful on the melancholy and touching “Ship of Fools.” Most impressive is the thumping “Collide the Generations,” redolent with Hendrix-like riffing, a thunderous beat and Jeffreys calling out to daughter Savannah amid the cries of “Daddy’s little girl” and “crash the generation.” It all winds up being a gorgeous mosaic of music that shows the septuagenarian rocker still has plenty left to say in his golden years.