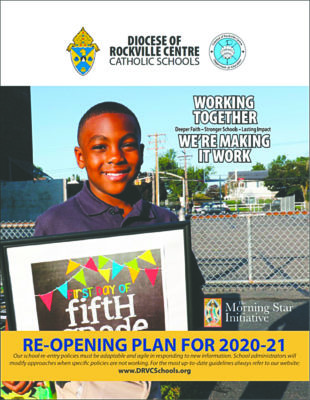 In the mist of the conflicting information and uncertainty surrounding the pandemic that was prevalent during this past summer, the leadership team from the Morning Star Initiative and the Department of Education had to make some serious decisions. Catholic Elementary School students from across the island had been learning remotely since mid-March, and even though the schools were well prepared to take learning online again in the fall, the leadership team understood the educational and social ‘costs’ associated with isolating children for extended periods of time.

Following a parent survey that indicated that a vast majority of the families of students across the diocese would support a return to classes, the team got to work. First, a consulting firm that specialized in risk mitigation and emergency operations planning was retained to help draw up a master re-opening plan. This plan, which is available at the DRVCSchools web site, provided the master plan that each school would follow.

Representatives from the emergency operations consulting firm subsequently visited each school to help each modify the elements of the plan to best suit each specific building layout and student population. One of the elements each plan included was the creation of cohorts of students who would learn together. In most cases, students stayed in a single location and teachers rotated between classes to minimize contacts. Halls and stairways were identified as single direction routes within the building; and classrooms, auditoriums, cafeterias and even bathrooms were reimagined to maintain the appropriate social distance. In the classroom, desks were separated, and clear Lexan dividers were placed on desks and tables where appropriate.

Principals worked to establish a range of new procedures at each school that helped to assure student safety. Masks of course were mandatory, and students had planned ‘mask breaks’ built into their day in safe, distanced, outdoor spaces. Some schools staggered start and end times. Many schools utilized different doors for different grades, and all schools test everyone entering the building to assure that they don’t have a fever. The range of activities in gym changed, and food began to be served in single-serving boxes or containers.

As the new school year started, parents were given the option of having their children attend in-person or attend school virtually. While the overwhelming majority of families chose to send their children back to school, virtual students participate daily at every school.

By utilizing a combination of physical changes to their facilities, and new policies and procedures to guide daily life, Long Island’s Catholic Elementary Schools opened in early September on schedule and have been operating as planned the entire academic year. The continuity of the children’s education has been maintained. The sanity and structure of students’ lives has been returned. Student-teacher relationships burn bright again, friends have been reunited and the children’s spiritual journeys continue.

—Submitted by the Diocese of Rockville Centre