Memorial Day in 2020 is much different than ever before. No large parades could take place, but Nassau County Executive Laura Curran wanted to...
Read more
Food & Leisure

With consumers more conscientious about finding healthy eating options, B.GOOD recently opened its first Long Island location in Garden City. With taglines that include “Food with Roots” and “Real Food Fast,” the Boston-based chain prides itself on meals created with handpicked fresh produce delivered daily from local farmers and suppliers. Since childhood friends Jon Olinto and Anthony Ackil launched its flagship store in Boston back in 2004 with help from head chef Tony Rosenfeld, B.GOOD has expanded to upwards of 50 locations throughout the Northeast and Mid-Atlantic.

The 2,700-square foot store that opened at 191 Seventh St. in Garden City is bright and airy with a staff of 12. There is also a photo of Ackil’s Uncle Faris, who inspired the founding of the restaurant and its name, according to Director of Local Store Marketing Jennifer Granillo.

“The good advice that Uncle Faris would give them, ‘Eat this good food and be good,’ was where the name of the restaurant came from,” said Granillo. 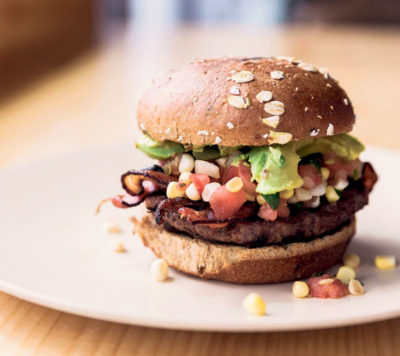 It is these kinds of options that Granillo feels has allowed B.GOOD to expand at its current rate. Catering will be offered by the Garden City B.GOOD in the next couple of months. With future locations slated for Commack, Nanuet and secondary ones coming to Brooklyn and Jersey City within the next six to 12 months, Granillo feels B.GOOD addresses the jam-packed lives people are leading.

“I think that a lot of busy moms and dads and other active people want to eat well but they’re busy. Life is different now,” she said. “They need something that can be their go-to, is reasonably priced, but makes them feel really good. And I think B.GOOD really fits that [need].”