‘R’ You Ready For Oyster Season?

With the beginning of the string of ‘R’ months upon us, it’s practically a holiday on Long Island. The old saying goes, “Only eat oysters in months with an ‘R,’” and though it dates back to the late 16th century, the expression holds some truth.

Months that lack an ‘R’ include May, June, July and August, which are, for the most part, the warmest months of the northern hemisphere, historically making for unsuitable shellfish harvesting conditions for a few reasons. Oysters, which already don’t have a large window of time before spoiling, are more likely to perish in the heat. In addition, summer marks the spawning season for oysters, causing them to lose their characteristic consistency and become softer and less appetizing.

But fear not. With modern refrigeration, present-day harvesting techniques and better food safety practices, oysters remain a delight to be enjoyed year round.

That said, it’s time to get eating. Oyster season is here, and there’s certainly no shortage of ways to celebrate this joyous time of the year in Nassau County. 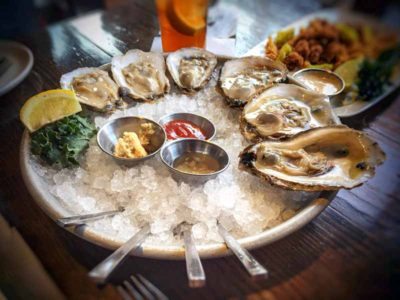 Baked, fried, grilled, raw, you name it. These diverse mollusks can be served in a way that appeals to any taste bud. Whether ordered in a favorite restaurant or prepared from the comfort of the kitchen, there’s a recipe for everyone.

Aside from various preparation methods, there’s also a number of types of oysters depending on what region they come from. Long Island’s great claim to fame is the Blue Point oyster, originating from the Great South Bay in the early 1800s.

When a restaurant has “clam” in the name, it’s no surprise that their oysters must be something to give a try. Vincent’s Clam Bar of Carle Place boasts that their oysters, which come in a range of styles, have been a menu favorite for years.

“There’s a huge diversity of oysters,” said Bobby Marisi, owner of Vincent’s Clam Bar. “You can have them with cocktail sauce, hot sauce, crème fraîche. They can be baked, fried, florentine, Rockefeller, the list goes on.”

At Vincent’s, when in doubt, go for their Blue Point oysters served over ice on the half shell. This simple presentation of the classic seafood dish does not disappoint. Other notable local restaurants with an excellent selection of oysters include Bar Frites in Greenvale, Popei’s Clam Bar in Bethpage, Waterzooi in Garden City and Louie’s Oyster Bar and Grille in Port Washington.

Almost as exciting as the oysters themselves are the drinks to wash them down with. When it comes to beer, why not stick with the Long Island theme and order a beer native to its shores? Blue Point Brewery and Montauk Brewing Company have become staple names in most bar and restaurant scenes, producing brews of different bold flavors both year round and of the seasonal variety.

Wine also serves as a sweet compliment to a serving of oysters.

He also specifically recommended to pair oysters with a glass of white wine from the Sancerre region of France.

Oysters are so beloved by the masses that there’s an entire festival dedicated to it. Don’t miss Oyster Bay’s Oyster Festival, dubbed the largest waterfront festival on the East Coast, Oct. 15 and 16. The two-day event presents mouth-watering oysters and seafood dishes, as well as live performances, oyster-shucking contests, carnival attractions and more.

The event is free at Theodore Roosevelt Park from 11 a.m. to 6 p.m. For more information, visit www.theoysterfestival.org.