Power Play Back To 1980 With The Islanders

Moments before the New York Islanders headed back onto the ice during Game 6 of the 1980 Stanley Cup Finals against the Philadelphia Flyers, Bobby Nystrom headed to the locker room. He had 15 minutes to get his head in the game.

“I actually sat down in the bathroom,” Nystrom, a right winger at the time, recalled. “I went into the medical room, got a scalpel and I carved a notch at the end of my stick, signifying I was going to score the overtime goal.”

And Nystrom, who scored an overtime goal to beat the Buffalo Sabres in Game 2 of the semifinals, was determined to repeat his astonishing feat.

“We had a ritual in the locker room,” the man who sported jersey No. 23 said. “In between the regular game and overtime, someone would yell, ‘Who’s going to be the hero?’ Everyone in the room said, ‘I am.’ I definitely felt that I was going to get the winning goal.”

Seven minutes and 11 seconds after the Islanders headed out to the ice, the journey to bring Long Island its first Stanley Cup title came into fruition.

“When I saw the puck go in the net, it was just a moment of, ‘Ah. Thank God,’” Nystrom said, expelling a sigh of pure relief. “Then, I saw Johnny T [John Tonelli] coming over with his gloves and his stick. I was covered by bodies on the boards. It’s something you dream about.” 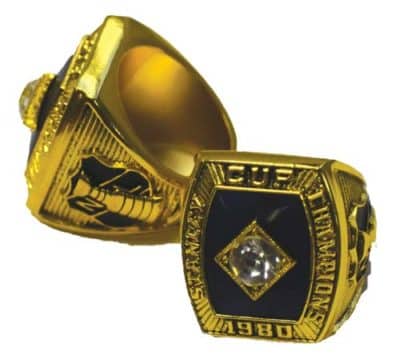 Finally, after the Islanders had been close to advancing to the last round of the playoffs a year prior, Long Islanders had something to celebrate. Instead of watching the New York Rangers lose the Stanley Cup to the Montreal Canadiens, there was a celebration unlike any other in Nassau Coliseum.

With the same core group of players for multiple seasons, the lessons they learned from those brutal losses paid off. The Isles became one of the most physical teams in 1979-80, unafraid to drop their gloves and make their opponents taste the ice on which they skated.

Clark Gillies, a 25-year-old left wing at the time, was known for being the Islanders’ enforcer when it came to squaring off with the team’s counterparts. And it’s not surprising that when Nystrom scored, he took a deep breath, knowing he could finally relax.

“The shift before Bobby scored, I just got off the ice,” Gillies, the fourth overall pick in the 1974 NHL Amateur Draft, said. “They got on, and the play happened very quickly. I still had my head between my knees, catching my breath when Bobby scored. I looked up and was like, ‘I can’t believe this is happening.’ It really was like, ‘Holy, sh*t. It’s over. We won. We’re not going back to Philly or on the ice again. All I have to do is go in the locker room and pour champagne all over myself.’”

Bryan Trottier took home the Conn Smythe Trophy, the MVP award for the Stanley Cup playoffs. He scored an astonishing 12 goals throughout the playoffs, a year after winning the Hart Memorial Trophy (regular season MVP) and the Art Ross Trophy (the league’s point leader).

The Islanders’ power play became one of the key ways to break down the Flyers, who only won Games 2 and 5.

“Our power play was amazing the whole playoffs,” Gillies said. “Looking back on that, there was a lot of talk the Flyers couldn’t be as physical as they wanted to because they couldn’t risk penalties since our power play was so good. We were pretty lethal.”

Led by legendary head coach Al Arbour, who was with the Isles from 1973 through 1986 and 1988 to 1994, the Islanders suddenly became the top team in the NHL. Long Island, as a result of the triumph, exploded in awe.

“It was great for a moment,” Nystrom said. “I never got a single chance to touch the Cup that year. All of the people were interviewing me, so I was just standing around. The next year, I was first in line.”

“When they left this place, they were all honking their horns outside,” Gillies said. “The first year, we congregated somewhere by Nassau Community College. We all got into Model-T cars and went through the crowd with cops leading us down the street on horses.”

The four straight titles were the culmination of a young team that adapted to the circumstances around them. They were willing to learn, and did so at a rapid pace. A whopping 14 players remained on the team for each of the four Stanley Cup wins.

Fast forward 40 years, as the Islanders celebrate the anniversary of the 1980 squad, the Islanders look to return back to the Stanley Cup. If the team can win it all, 40 years after their first triumph, Long Island will surely erupt once again.

“The last thing to check off on my bucket list is to see a Stanley Cup win,” Gillies said. “I’ve done just about everything else to complete it. I want to drink out of the Stanley Cup again, and the only way to do that is if this team wins.”