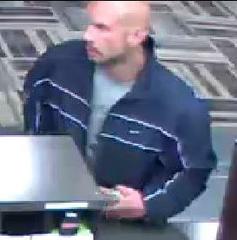 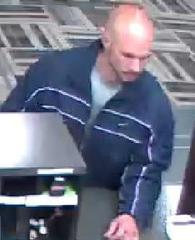 Utilizing video surveillance, as well as Crime Stopper tips, detectives identified the suspect as Brian Blackford. A final robbery occurred on June 9, at 2:50 p.m. at the Capitol One Bank located at 250 Smithtown Boulevard, Nesconset, when Blackford allegedly entered the bank approached a teller with a note demanding cash. This fit the pattern of six previous robberies: Capitol One in Deer Park on May 24, Bank of America in Commack on May 27, Bethpage Federal Credit Union in Farmingdale on May 29, Capitol One in Farmingdale on June 2, TD Bank in Sayville on June 3, and Citibank in North Lindenhurst on June 5. As in each of the other six robberies, the teller complied with the suspect and he then fled. There was a break in the pattern when instead of fleeing on foot, the suspect was allegedly observed entering a waiting vehicle. A description of the vehicle was broadcast to patrol officers, who spotted a vehicle that fit the description and initiated a stop. Police placed the driver, Fitzalla Coward, 51, of Brentwood, and the passenger, Brian Blackford, 40, of Kings Park under arrest without incident.

Coward was charged with seven counts of 3rd degree robbery. Both Blackford and Coward are scheduled to be arraigned at First District Court in Central Islip on June 10.

Anyone with information on these cases is asked to call Crime Stoppers anonymously at 1-800-220-TIPS. All calls will be kept confidential.