Guided by a firm belief that positivity is far more contagious than negativity, the Long Island business owner is continuing to spread good vibes while keeping his dream alive.
Read more
News

It’s usually in the absolute worst of times that we see parts of humanity shine.
Read more
TOP STORIES

Fourteen individuals were recently arrested for the criminal possession and sale of controlled substances and conspiracy. The arrests were the product of a months-long collaboration between Nassau Narcotics, the Nassau County District Attorney’s Office, the Drug Enforcement Agency and the U.S. Attorney’s Office for the Southern District.

“This was an important arrest of 14 individuals,” said Nassau County District Attorney Madeline Singas at a Nov. 3 press conference about the arrests. “It was an important disruption of a distribution ring of pills.”

The investigation started with Dr. Ernest Lopez, who had written more than 8,000 oxycodone prescriptions to people who did not legally obtain them. From that, the DA’s office, the Nassau County Police Department and their partners with the DEA rolled out Operation Blue Highway.

“There was a delivery made yesterday that was intercepted,” Commissioner of Police Patrick Ryder said. “The DA’s office wrote a search warrant and then we went into the house.”

Inside the residence at 109 Hazel St. in North Bellmore, detectives recovered materials including substances for the manufacturing of THC oil, glass jars, glass beakers, tubing, a vacuum pump, syringes, scales, and assorted chemicals and compounds. They also recovered what is believed to be Oxycodone, Adderall, Suboxone, THC oils and more than $70,000 worth of cannabis. Six vehicles were confiscated. 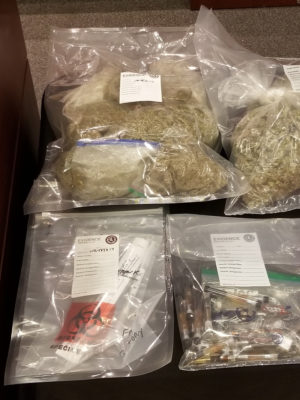 It was discovered that John Marcolini of Levittown was the leader of the 14-person group. He, along with Eric and Christine Fortmeyer of North Bellmore, directed individuals to Lopez who would then “fill these scripts, give [them] to a group of people who would then resell and redistribute,” Singas said. “Sometimes they’d sell the prescriptions, sometimes they would fill it and then sell the pills.”

Ryder explained that the Fortmeyers, who lived in the Hazel Street residence with their 11-year-old son and 17-year-old daughter, had been making liquid marijuana, putting it in a needle in a syringe and then injecting it into things such as vape pipes and gummy bears. They had also been working with Marcolini to sell pills they received from Lopez.