Please Eat The Daisies (But Not The Lilies-Of-The Valley)

I have successfully incorporated purple chive blossoms into my salads and omelets and have found that orange and yellow nasturtium petals add spicy flavor and color to any dish.


These simple successes are outweighed by monumental failures. I once tried making dandelion wine and ended up with a soppy scummy mess. I attempted candied violets, expecting delicate little sugarcoated flowers to decorate a cake; instead they looked like ants that had made themselves into a ball before dying.

Fortunately, I now have Cooking with Flowers by former Long Islander Miche Bacher and I feel brave enough to use flowers again. Bacher, who had a custom confectionary studio in Greenport, uses flowers in many of her creations: “Flowers add color, complexity and what I like to call the magical ‘what’s in it’ factor in your food,” she writes in her book.

When I told her my dandelion failure she suggested I try her Dandelion Blossom Cake. “Although the leaves and roots are bitter,” she says, “the flowers actually taste like honey.” I was surprised to learn that lilacs are edible. “Most people are surprised,” she says. “I was skeptical at first, thinking it would taste like my grandmother’s perfume, but they’re fresh, heady and sweet with slightly bitter lemony undertones.” She loves cooking with roses—each rose has its own special flavor.

I was curious whether any Long Island chefs use flowers and went to Carlos Roman, one of the most creative and fearless chefs I know. At his restaurant Vinoco in Mineola, Carlos creates tapas like Carnegie pastrami empanadas and Korean chicken with kimchi tacos. I knew flowers would not intimidate him.

“The whole world is fusion,” he says, “so why not add flowers to the mix.” He prepared “Uncle Hector’s BLT,” an artistic palette where bacon marmalade, pistachio pesto and bacon croutons and feta rested on pansies, which he called the “lettuce,” inviting me to scoop up each circle with chopsticks.

Joseph Campbell, the co-owner and pastry chef of Torta Fina Bakeries in Babylon and Commack, often decorates his occasion cakes with fresh flowers. “Roses are classic,” he says, “and hydrangeas are a big favorite at bridal showers.” At Prime in Huntington, they make a white cosmos with an edible wild hibiscus flower in the base.

At Jedediah Hawkins in Jamesport, executive chef Kasia Dabrowska thoroughly embraces cooking with flowers. She has made cashew brittle with rose petals, carnation macaroons and used rose water in meringue drops. Orchids have found their way into salads and candied pansies decorated a cake. “Not everyone realizes they can use the flowers and how bright the flavors are,” she says. “it adds a little element of surprise for our guests, especially in the springtime when everything is starting to bloom.”

So what are you waiting for? Wake up and eat the flowers. They’re delicious.

P.S. About those lilies-of-the-valley—they’re highly poisonous. 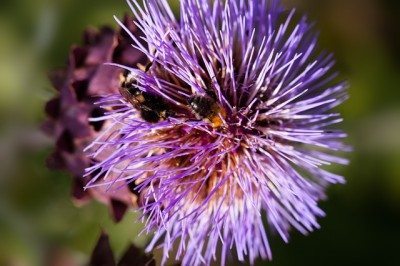 When it comes to edible flowers, know what you’re eating. Some plants and parts may be toxic.

• Confirm what parts are edible.

• Get or buy edible flowers from a reliable known source.

• Never use pesticides or chemicals on edible flowers.

• Don’t harvest from roadsides or fields where you don’t know how it’s been treated; even though a field or roadside may not have been treated with chemicals, adjacent fields may have been and a toxic chemical can drift over.

• Don’t eat flowers from florists; they more than likely have been treated with a pesticide.

Edible flowers for sale in markets and restaurants have been carefully and safely grown by professional growers for human consumption. Unless you grow it yourself and know what it’s been treated with, why take the risk?