Pelican Documentary ‘Gets It’

Pelican Dreams, a documentary by Judy Irving, who made “The Wild Parrots of Telegraph Hill,” explores the lives of brown pelicans and in the end “gets it” 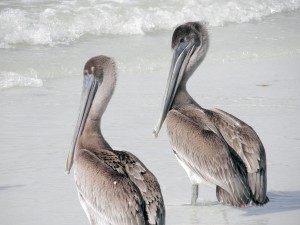 about these birds as sentient beings.

The film begins on the Golden Gate Bridge where a dehydrated, confused, four-month-old brown pelican is being rescued. Irving follows the bird, named Gigi for the bridge, who is taken to a rehab center. She then goes to the remote Channel Islands, 350 miles south of San Francisco, where Gigi may have been hatched to see what it was like in its first few months of life. This is an attempt to see a young pelican’s view of the world.

Brown pelicans are over four-feet in length with a wingspan exceeding six and a half-feet. That, combined with their huge bills, give them both a prehistoric and comic look. Irving states that pelicans look like “flying dinosaurs.” Looking at them it’s almost impossible to believe that birds didn’t evolve from dinosaurs. She looks at young pelicans learning how to fly and immediately sees that there’s a learning process that young birds go through including trial, error and awkwardness.

I have always been intrigued how brown pelicans plunge dive from heights. They make a corkscrew-like turn, then plunge down at an angle entering the water bill first with wings folded like an arrow. When the bird surfaces it strains out the water in its pouch which holds up to three gallons. I’ve often seen those pouches extended with the gray form of fish inside. I once saw small fish stuck in a pelican’s bill like so many Jonahs. I’d never seen that dive in slow motion nor had I ever seen how a juvenile needs to work on that corkscrew-like twist until Pelican Dreams. From a birders perspective this footage is excellent.

Brown pelicans also swim on the surface, partially diving underwater. However, I’d never seen their open bills entering the water nor open under water as the camera captures them. I was amazed at the contoured shaped of the birds’ heads underwater. This was nature and art in one. 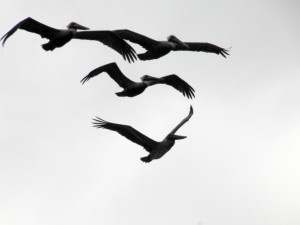 Some students in my birding class asked me, after they’d seen the brown pelicans, what the difference was between the ones with the white heads and those with the brown heads. I never paid much attention to this difference as my eye was always drawn to the lighter heads some of some with frosty yellow heads. Pelican Dreams deals with this in a very clear way. The brown heads are those of the juveniles, the white heads are the breeding adults and those in between are not yet adults.

During breeding the birds’ eyes turn from brown to blue. There’s a courtship ritual scene shown where an apparent male turns its head 360-degrees in front of a female. According to Irving this means that “I like you and I don’t want to leave but I will if you want me to.” That scene sparked my interest because I only see pelicans diving, swimming or resting on the beach or a dock, but never courting. I have though, seen royal terns courting and mating. I never saw a female reject an eager male where the male forced himself on her. “No” meant “no” and he walked. This suggests that “no” means “no” among brown pellys too.

There is a scene where a second pelican, Morro who cannot fly due to an injury walks over to a large mirror in a yard, looks into it and appears to recognize its image as another pelican. It repeatedly brings branches to the mirror image. I’ve only seen something similar once. In this instance a peacock was walking around the steps of an empty building whose front had mirror image glass. When the peacock accidentally saw itself, it became frightened and hid. Then it tried to sneak up on the “stranger” only to find itself repeatedly face to face with its own image. Both incidents, pelican and peacock make me wonder how birds recognize birds of the same species. It also makes me wonder if they have anything like self-image that humans have.

One thing they do have is curiosity. There is a scene where a couple that are Morro’s caretakers leave the door ajar to their house. The pelican slowly pushes open the door, walks around like a child might, checks out a lampshade and then leaves. It’s hard not to see the similarities between Morro and a small child. It’s the most charming and touching scene in this film.

Eventually Gigi is able to be released back into the wild. Morro, who cannot fly, is a working bird. He goes out once a month with his caretakers as a demo bird in educational lectures. It’s a nice gig. However neither of these two birds is the star of this film, rather it is the brown pelicans themselves. At the film’s end Irving says that she no longer sees pelicans as flying dinosaurs but as fellow beings. This is why I say that the film “gets it right.” It’s difficult to spend hundreds of hours looking at birds without recognizing that they are watchful, observant beings with emotions, especially fright.

A bird looking me directly in the eye, assessing whether I’m a threat or not while deciding whether to flee is a “locked in” moment. It is then that one cannot fail to recognize that these are fellow sentient beings. Perhaps they have a different kind of intelligence than we humans have. Pelicans have, as Irving states, been around for 30 million years or 25 million longer than hominids. They don’t create non recyclable garbage, use up the planet’s natural resources, make wars nor create global warming. To be here this long they must be doing something right and this film gets it right about them.