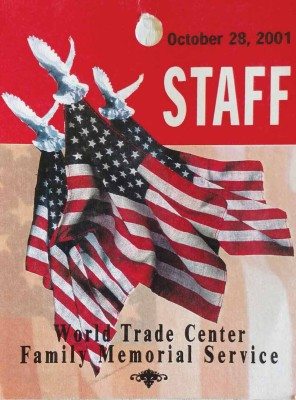 There were many reflections about the 2001 terrorist attack on America leading up to the 15th anniversary just a few weeks ago. Following is my reflection on the memorial service at the World Trade Center on Oct. 28, 2001. I attended the service with a group of mental health workers who offered their support for the bereaved.

As I recall, at the end of the service there was a chill in the air as the sun disappeared behind the ruins of the World Trade Center. Renée Fleming, accompanied by the Orchestra of St. Luke’s, sang “God Bless America.”

Moments earlier I said goodbye to the family I stood beside during the memorial service. They sat in the back row of our section, one of scores of sections filled with thousands of folding chairs, each chair occupied by a grieving family member. I stood with my back against an iron gate so I would not block anyone’s view. The family had lost its father and husband, a decorated firefighter. The widow was a slight woman of Italian descent, probably in her late 60s.

Photos of her husband were pinned to her wool coat, and to the coats of her three children. He was handsome. He had a white moustache and a full head of silvery hair, combed straight back. When the memorial service started an hour earlier, one of her sons, an off-duty police officer, asked if I would make sure that no one obstructed his mother’s view. He said, “You can see how short she is.”

The service began with a processional that included His Eminence Edward Cardinal Egan, Archbishop of New York. Then, police officer Daniel Rodriguez of the NYPD sang “The Star Spangled Banner.” He had become a national presence by appearing in his dress blues and singing the national anthem at Yankee Stadium before the 97th World Series that pitted the Yankees against the Arizona Diamondbacks.

Everyone was on his or her feet. A massive wall of mourners rose around the tiny figure to my right. When I saw her struggling to climb, I took her arm and helped her up onto a folding chair. I told her that she could grab on to me. “Hold on to my shoulders,” I said. She hesitated. I told her, “Don’t worry you won’t knock me over.”

I could feel her trembling as she removed her right hand from my shoulder and fumbled for a tissue inside her coat pocket. I reached into my pocket and handed her a handkerchief.
When I was picking out my clothes earlier in the morning I had come across several unopened packets of white handkerchiefs. They belonged to my father who died seven years earlier. As I got dressed, I thought that today my father would want somebody who needed it to have one of his handkerchiefs. At first she refused my offer, not wanting to impose. I urged her, “Please, take it. It’s okay.”

Fifteen years later, my father’s handkerchiefs remain tucked into my dresser drawer—a daily reminder of when I joined a parade of broken hearts. Sometimes I close my eyes, think back and try to recall what things felt like before that sunny fall morning at ground zero.