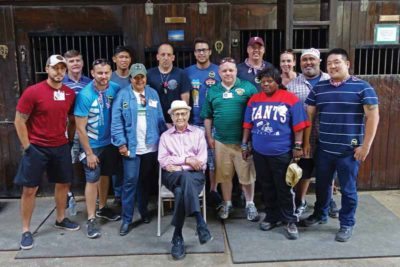 Pal-O-Mine Equestrian, Inc. recently held an event on behalf of the Iraq and Afghanistan Veterans of America (IAVA; www.iava.org), the nation’s leading post-9/11 veteran empowerment organization with a diverse and rapidly growing membership in America. Held at Pal-O-Mine’s Islandia facility, the event was attended by 55 people.

Veterans and their families were invited to a day that featured a luncheon and a presentation by friend of Pal-O-Mine, Norman Lear, the renowned American television writer and producer of such popular 1970s sitcoms as All in the Family, Sanford and Son, One Day at a Time, The Jeffersons, Good Times and Maude.

Lear shared his personal experiences as a World War II combat soldier. In addition, Pal-O-Mine made it a real family day with the vets’ children enjoying the pool and playground, their wives learning about Pal-O-Mine’s Equine Assisted Learning programs, and everyone also benefiting from an understanding of natural horsemanship techniques practiced by Pal-O-Mine.

The veterans learned that Lear enlisted in the U.S. Army Air Forces after the Pearl Harbor attack and that he served in the Mediterranean theater as a radio operator/gunner on Boeing B-17 Flying Fortress bombers with the 772nd Bombardment Squadron, 463rd Bombardment Group of the Fifth Air Force which bombed Germany. He flew 52 combat missions and was awarded the Air Medal with four Oak Leaf Clusters.

Hearing the story of a decorated WWII vet by one of America’s best storytellers, and getting to know more about Pal-O-Mine and its programs for returning veterans, was a success.