Today’s national average of five dollars per gallon is the highest price since tracking began and creates a serious financial burden for the majority of American drivers.

Owners of some popular vehicles will have to dig very deep to stay on the road. 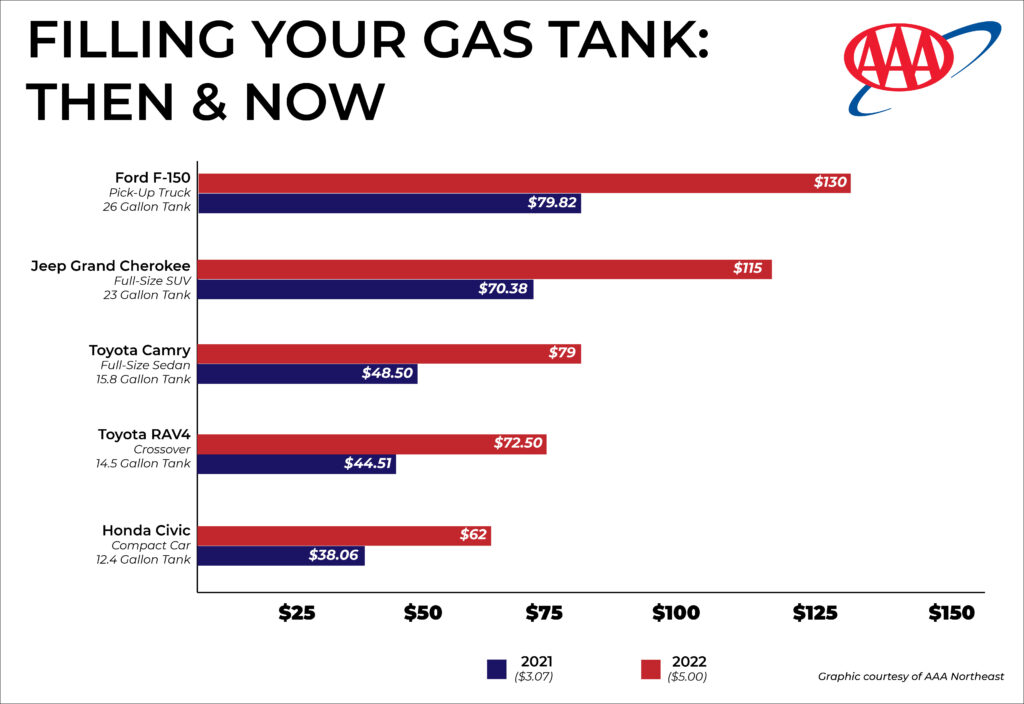 “No matter what type of vehicle someone drives, hyper expensive gasoline means having to take money from other parts of the family budget to be able to afford filling the tank for the majority of American households,” said Robert Sinclair, Jr. of AAA Northeast. A driver survey by AAA last March found that 75 percent of respondents would have trouble paying for five-dollar gasoline and would have to drive less, carpool, limit dining out or delay major purchases to afford gasoline.

High fuel costs impact everyone. Empty shelves around the nation will be restocked with supplies delivered by diesel burning trucks. The average big rig holds 300 gallons. With diesel averaging $5.76 per gallon nationwide, the all-time high price, filling up a truck will cost the driver a mind boggling $1,728. Diesel is much higher locally with all averages at more than six dollars per gallon. These costs get passed along to consumers, increasing and prolonging inflation.

With the ongoing war in Ukraine creating crude oil supply problems and per barrel prices at more than $120, and with increasing demand for petroleum products with the global emergence from COVID restrictions, factors leading to high fuel prices remain. Also, with hurricane season underway, worries about the effects of a major storm hitting the vast oil and gasoline infrastructure along the Gulf Coast will continue through November. Hurricanes Katrina and Rita in 2005 led to shutdowns of drilling platforms, refineries and pipelines with overnight major gasoline price increases.