Over-Sixty: Shades of Gray Book Takes On Old Age With A Laugh

Getting older is a fact about life that cannot be avoided. For some, age is just a number, but for others there are some serious concerns and questions. Barbara Paskoff and Carol Pack decided to combine both sides of the spectrum about facing old age in their self-published book, Over-Sixty: Shades of Gray—A Journey Through Life’s Later Years (On The Road To Fossilization). The book takes a humorous approach to the senior experience, and according to both authors, is a feel good book for any age.

“I used to produce health documentaries for PBS so I knew a bit about the field,” said Paskoff, an Emmy-nominated former Long Island broadcast journalist. “Carol was my teacher when I went back to school for my masters, and we have been longtime friends and colleagues ever since.”

Co-author Pack was a former [Long Island News Tonight] anchor and assignment manager who was recently inducted into the Press Club of Long Island Hall of Fame.

“I’m a fiction author—I have a series of books called Chronicles: The Library of Illumination—but this is my first foray into a nonfiction book,” said Pack.

So how did the two women come to write such a book? It all began when Paskoff picked up a magazine in a doctor’s office. 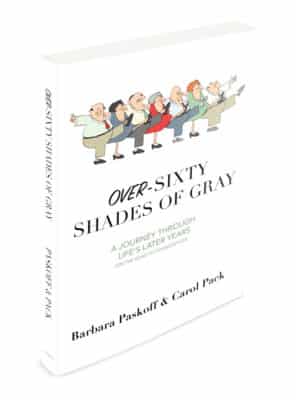 “Many years ago I was in a waiting room looking at a health magazine but it stopped detailing health tips at the age of 50. I got annoyed and was so angry,” said Paskoff, who needed to find an outlet for her emotions. “That was the impetus that started us writing the book. I always felt dismissed at that age and I felt that age in this country is not respected so this gave us an outlet to say to our demographic, ‘hey, we are 60 million of us and it’s unfortunate that we are so underrepresented.”

Paskoff said that she and Pack spoke to many people who feel the same way and that Over-Sixty: Shades of Gray address the emotional aspect of aging so they don’t have that feeling. Simply put, the authors want their readers to know that there are people out there that can relate.

“There are many embarrassing changes that come with aging and you’re not in this alone. Everyone has these problems that you’re thinking about,” said Pack. “We took a humorous approach with personal experiences, quotes and cartoons because we want to be able to laugh about ourselves with a lighthearted look about getting older.”

Even Paskoff shared that the term “senior citizen” is such a hard name to wrap her head around as she doesn’t feel or act that way. Instead, she prefers to savor and accept every moment in life, as you never know what is going to happen next.

“This book gives the younger readers some kind of understanding what their parent or grandparent is going through while appealing to those looking for a bit more of an educational primer for old age,” she said.

The book, which features 17 subject-matter experts across various medical, health and psychological fields, keeps readers engaged with cleverly named chapters like “When My Hair Has Turned to Silver,” “You Want Us To Wear What?” “From iPhone to Life Alert,” and many others. Topics vary from bodily changes and physical appearance to sex and marriage and grandparenting. With so much information, the authors decided to take the highlights of all of their interviews ad condense them into bullet points for an easier read.

“We talk about memory lane and what people remember growing up about the good old days,” said Pack of the several pages that include relatable material about family, technology, school, music and current events. “We do include some serious essays but it’s also lighthearted.”

Pack and Paskoff said it took them four years to write the book, including the year they took off to create a proposal and get an agent. The two authors are keeping busy, promoting their book by doing speaking engagements and book signings.

“We’re like Yin and Yang,” said Pack. “We’re total opposites of one another, but we connect so well over so many things.”

“Writing with someone you know about something you care about…it’s been an extraordinary experience writing this book,” said Paskoff. “We hope this book fills a void for those people who feel embarrassed talking about their age.”

Pick up a copy of Over-Sixty: Shades of Gray online at Amazon, Barnes & Noble or the iTunes store.