Let Them Eat Food Too: Cheesecake Factory Rolls Out New... 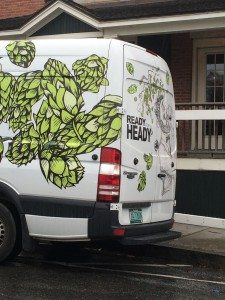 Hetty. Heddi. Oh, what was that beer called? “Heady Topper, silver can.” Yes, there it is on the notes I made to myself.

In early October I mentioned to my coworkers that Topnotch Resort and Spa in Stowe, VT, enthusiastically offered to host me for a tour of their property, giving me a chance to explore Stowe and Waterbury for a couple of days. The two souvenir requests from the newsroom…maple syrup and Heady Topper. Sounds easy. I made a note in my cellphone calendar and then forgot all about it until my trip.

I arrived in Stowe around dinnertime on a Sunday and stopped to eat at a restaurant called Doc Ponds. While checking out the wine and beer list, there it was, a familiar name…Heady Topper. I ordered it with my dinner, although at this point I really didn’t realize the fanaticism surrounding it. I remembered then that it was something I should bring back with me. I like beer, but I am not a huge fan.

I asked the Doc Ponds waitress where I can buy Heady Topper and she snorted. “Ha! Good luck. You’re competing with professionals if you are here trying to snag some Heady in the next three days.” What did that mean?

Now I was curious and determined. When I returned to my room at Topnotch, I took to the Internet and discovered the craze that is sweeping Vermont and even found a “where to buy” page that listed the locations and dates of the deliveries (www.alchemistbeer.com/buy). I mapped out my search route for the next two days. Monday’s search—fail. Tuesday’s search—fail. Shop owners would shake their heads and chuckle a little, saying they had sold out minutes after their delivery that day. 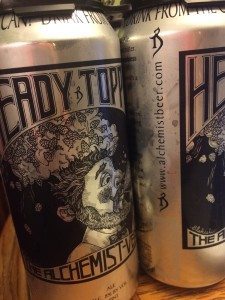 On Wednesday morning, I had breakfast with the manager and concierge at Topnotch Resort. I shared my challenge and got a little insight into this area beer craze. The concierge said she knew of a store in Waterbury that had a delivery at 2 p.m. on Wednesdays, but I planned to be on the road heading home before noon on Wednesday.

There was no way I was hanging around until 2 p.m. to buy beer.

After breakfast and check-out I made my way to the first Waterbury store, Crossroads Beverage. It was a small convenience store off the highway. I went straight to the cooler. Empty. I thought I was too late.

On Monday, I read online that real fans of Heady Topper call it “The Heady”, so if I wanted to seem like I knew what I was talking about I should too. I asked the cashier, “Do you have The Heady?” She pointed behind the counter to a stack of a couple of cases. Heady Topper is supposed to stay cold, so I asked why it wasn’t in the cooler and she said it was just delivered minutes ago, that it’s not worth the time to get it into the cooler for as fast as they sell out of it. One 4-pack per person limit here. That would not be enough, I had a request of 24 cans to bring back.

I went to the next store on my list, Waterbury Village Market. A dozen individual people were moving quickly into the store and all in the same direction once inside. The Heady Hunters! I was hot on the trail of the most recent delivery of Heady Topper.

As I approached the beer cooler, four 30-somethings were leaving the cooler with a 4-pack in each hand. There was one 4-pack remaining. As I reached into the cooler, so did two other people. I got The Heady.

In the checkout line, I realized the quartet of guys ahead of me, the ones who had cleared out the cooler, were from Canada. The cashier was checking visas to confirm their birth dates for alcohol purchase. When it was my turn at the register, the cashier confided her annoyance, “these guys come in from Canada by the van-load every week and clean out our Heady.” The Canadian border is only 80 minutes from Stowe.

When I left the store, I saw the guys piling back into their van. Sure enough, Canada plates.

I still needed more beer; I had eight cans, but I still needed 16 more.
One more store on my list, Craft Beer Cellar. And then my GPS signal failed. How did we ever survive without GPS? Waterbury wasn’t that big, surely I would pass the street and find the store eventually.

No luck, but then I spotted it—the Heady Topper delivery truck. The Doc Ponds waitress was right, people follow the Heady delivery truck. It was parked at the place the Topnotch concierge said it’d be for the 2 p.m. delivery. It was 12:30 p.m. now. I still was not prepared to hang around for The Heady. I kept driving around Waterbury, determined to find the third store on my list. I spotted the Canadians’ van; it was in front of the store I had been looking for. I went in and there they were, all four guys, 4-packs in each hand again and already at the register. I bought my eight-can limit.

It was now 1:15 p.m. and I still did not want to wait for the concierge-recommended store’s opening. My better judgment was blurred however by the excessive enthusiasm about this beer. I don’t even love beer, but I was eight cans short. I decided to wait.

The store sign was flipped to “open” at 2 p.m. and I bolted from the car, now in the pouring rain, into Cork Waterbury. “Do you have The Heady?” I asked out of breath. The clerk pointed to a small refrigerator.

And she replied, “We sell it by the case; one case per person.” One case? That’s 24 cans. But I need The Heady. Yes, please.

I load my case in the car. Triumphant, but soaked and exhausted from the Heady Hunt. It took me three days, but I conquered the quest for Heady Topper.