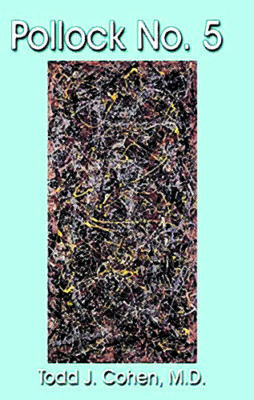 What does an extremely accomplished scientist, cardiologist and inventor do when he wants to indulge his passion for art, jazz and writing? If you’re Dr. Todd Cohen, you jump off from penning medical articles and books and dive head-long into taking a stab at writing fiction.

So it goes with Pollock No. 5, Cohen’s recently released debut which centers on Dr. Matthew Dawson, a cardiologist/inventor with a taste for fine art who gets caught up in an international art counterfeiting scheme in which he is accused of murdering the wife of a wealthy Goldman Sachs neighbor whose “Pollock No. 5” winds up getting pilfered. Despite being 300-plus pages, the Westhampton Beach resident has written a brisk read that has a historical fiction bent to it reminiscent of authors like Michael Crichton and Caleb Carr. The difference is that Cohen bases the action in places like the Bay Area and various Long Island locales including Sea Cliff, Great Neck, Port Washington and the small East End hamlet of Quiogue that he calls home. Adding to the authenticity, the New York Institute of Technology College of Osteopathic Medicine (NYITCOM) in Old Westbury chief of cardiology adds references to a number of real-life passions, be it jazz, art or restaurants.

Born and raised in Milburn/Short Hills, NJ, Cohen went to Johns Hopkins for medical school and did his cardiology training at Stanford University, allowing him to become intimately familiar with the Bay Area, a major location used in Pollock No. 5. In creating the Dawson character, Cohen shares some similarities including a passion for art and jazz. But he’s quick to point out that issues with infidelity and alcoholism rest solely with his protagonist.

“There are many dissimilarities and similarities as people who know me and my family will tell you,” he said, “This is clearly fiction. My wife Jill is not an alcoholic and never was. My kids are Justin and Britney and the Dawson children Jason and Bridget are loosely based on them.”

The seed for Jackson No. 5 was planted in the aftermath of Super Storm Sandy, which is when the book opens. As someone whose publishing experience ran to numerous medical papers and the release of 2010’s A Patient’s Guide to Heart Rhythm Problems, Cohen yearned to stretch himself.

“Going back to 2012 when Sandy hit and its aftermath, I had this idea and concept for this book,” he recalled. “It came brewing out of the trials and tribulations of life. I had been a medical writer and had written a Best Health book in 2010 for Johns Hopkins. I’d always wanted to dabble in fiction and it was kind of a fantasy. I think it grew out of dealing with Sandy, working hard at the hospital and having an outlet and concepts. I think the idea, concept and plot line for the book came pretty quickly. In fact, when it came to me after we were recovering from Sandy, I had a draft written for this book in 12 weeks.”

While the initial inspiration came rather quickly, Cohen’s path from idea to published author took nearly a decade. Nelson DeMille, who wrote a blurb for Cohen’s book, referred Cohen to DeMille’s publisher. And while the feedback was encouraging (“he told me it was a cool idea for a book and said I should get an agent along with making sure the book was well written before I sent it back to him”), that contact dissolved when the publisher left for another gig. And as Cohen’s full-time job also included being the director and founder of the Long Island Heart Rhythm Center and being an attending physician at Mt. Sinai Morningside in New York City and Good Samaritan Hospital in West Islip along with his duties at NYITCOM, he was unable to put a full-time focus on the book. And that didn’t even include being a trustee on the board for the Nassau County Museum of Art. Eventually, Cohen’s efforts paid off when he was signed by Black Opal Books, a West Coast-based boutique publisher that didn’t require he have an agent. The pandemic added another year to the process. The book eventually hit the shelves in May of this year. It’s a project Cohen hopes to expand into a number of sequels.

“This is my first novel and it is setting the plate for an adventure series,” he said. “Each book is based on an artist as a primary theme. The first book’s theme is Jackson Pollock. The second book’s theme is another very different, well-known, very hot and somewhat mysterious artist. Characters from the first book intersect with this mysterious artist and art world and it takes the reader on a very fast-paced, exciting and different journey. I already have the plot written along with a third of that book. But it’s all about the sense, fun, experience and maybe taking you into some important issues.”

Pollock No. 5 is available in paperback and eBook formats through Amazon and Barnes & Noble.