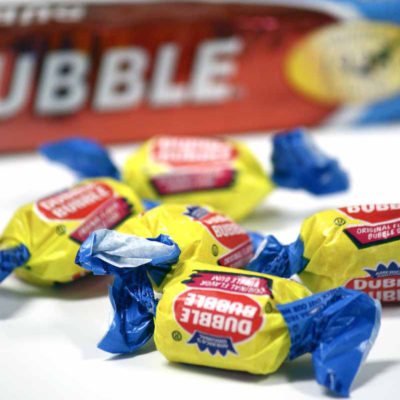 When you pop a piece of gum in your mouth, chances are you aren’t thinking of the chemistry or the history of chewing gum. You want to know how long it will last. You want to know how big of a bubble you can blow. Chewing gum has been around for centuries though, originally made from natural derivatives like tree resin, grass, grains and waxes…all of the things that the old wives tale would say is sticking to your ribs or still in your stomach for seven years, if swallowed.

The exact origin is not clear, but we do know that there is evidence of the ancient Greeks, Mayans and American Indians all favoring a similar concept.

The first commercial chewing gum, State of Main Pure Spruce Gum (sounds gross), from 1848, is the distant relative to modern chewing gum. Gum has definitely come a long way from ingredients like charcoal and chalk during the experimental years in the U.S. (wonder if they stuck that behind their ears at dinnertime?). It wasn’t until 1869 when a Mexican general began altering the flavor of his chewing gum base that has made gum as we know it today.

Nostalgic gum chewers often still seek out one of the first mass marketed chewing gums, Black Jack, created in 1871. Not everyone is a fan of the black licorice taste; peppermint soon after became the standard, not just because of its appealing flavor, but because experimenters found that mint-flavored gum held its flavor the longest.

Through trial and error, it was learned that chewing gum also served as a digestive aid, as a dental benefit and as a memory booster. Yes, seriously. Studies have shown that chewing gum actually increases some brain functions like productivity, memory and focus.

Another favorite still today, are Chiclets, made in 1880 by brothers Henry and Frank Fleer who experimented with cubes of sapodilla tree sap called chicle, with a sweet overcoating.
Not familiar with Black Jack or Chiclets? Surely you know the 1891 standard created by William Wrigley, Jr., with Juicy Fruit becoming a huge success in 1893 and Wrigley’s Spearmint gaining popularity just one year later.

The Fleer company, while experimenting with rubber in 1928, created something accidentally…Double Bubble.

Topps took bubble gum to a new level in the 1950s by adding it to their baseball card packages. Sugarless gum also made its debut in the ’50s, but did not sell commercially until a decade later.

Today, gum is sold in dozens of forms, shapes, sizes and flavors. It comes in sticks, pellets, cubes, tubes, tape and shredded. It’s in every flavor imaginable, some pleasant, some still not so pleasant. Rumors have it that Willy Wonka’s “Three Course Dinner” chewing gum (tomato soup, roast beef and mashed potato and blueberry pie) is still being perfected, getting closer and closer to reality every day.