Once Upon A Time, Hearst And Nast Were The Kings Of Sands Point Estates

The beautiful waterfront town of Port Washington is populated with sailboats, fresh seafood, luxurious shopping and grand estates. It is also saturated in literary history. Famed American publishers William Randolph Hearst and Condé Montrose Nast both have ties to one of Long Island’s wealthiest areas. Today, their publishing companies, Hearst Communications and Condé Nast, respectively, are the biggest mass media companies in the industry.

William Randolph Hearst Sr. was born on April 29, 1863. The businessman, politician and newspaper publisher became one of the greatest names of his time and left an indelible mark on media as we know it today. Hearst entered the publishing business in 1887 when his father gave him The San Francisco Journal. Upon a move to New York City, he acquired The New York Journal. A pioneer of yellow journalism, Hearst, who was now in command of at least 30 newspaper chains, influenced the popularity of human interest stories. The brand expanded to magazines, with leading titles such as Cosmopolitan and Good Housekeeping at the helm.

When The Great Gatsby was published in 1925, many believed that a certain Sands Point waterfront estate served as the inspiration for Jay Gatsby’s mansion in the book. Hearst purchased said grand estate of Beacon Towers two years later, a buy that included the mansion, adjacent lighthouse and keeper’s house.

When Hearst purchased the estate—which he referred to as Joan’s Castle—for his wife Millicent, the residence underwent a transformation. Hearst introduced his renowned collection of global art, American furniture and French paintings into the home. But while he was filling his mansion on Long Island, Hearst was also busy constructing one of the grandest palatial estates to date. His most famous is Hearst Castle, a Californian compound on oceanfront ranch land near the city of San Simeon. Architect Julia Morgan was tasked to design the 90,000-square-foot behemoth home that included 56 bedrooms, 61 bathrooms, 19 entertaining rooms, a private movie theater, tennis courts, indoor and outdoor swimming pools, 127 acres of gardens, an airfield and the world’s largest zoo. Today, the sprawling palace is now a museum.

The publisher died on August 14, 1951, but 20 years earlier, had financial problems so great that he was forced to liquidate most of his assets. Dedicated to his love of the written word, Hearst kept all of his newspapers and magazines.

Born on March 26, 1873, 10 years after the birth of his future competitor, Condé Montrose Nast was also an American publisher, businessman and entrepreneur. Known for founding his own media company in Condé Nast, which includes Vogue, Vanity Fair and The New Yorker among other titles, publishing was a second career.

Nast attended Georgetown University before earning a law degree from Washington University in St. Louis in 1897. Years of law school had not lit enough of a fire in Nast, who then embarked on his magazine career by working at Collier’s Weekly with his former classmate Robert Collier. 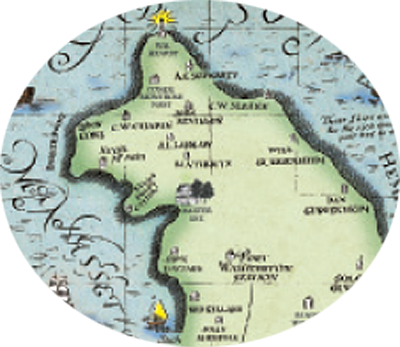 Condé Nast was founded in 1909, four years after the publisher purchased Vogue, transforming it from a weekly newspaper publication into a monthly fashion and lifestyle magazine highlighting women. In 1916, the launch of British Vogue saw Nast become the first American publisher of an international publication, surpassing Hearst.

Around the same time Hearst purchased his Sands Point estate, Nast designed one of his own. Known as Sandy Cay, Nast’s estate was designed in 1930 by Ferruccio Vitale. The vast landscaping and swimming pool highlight the mansion, which Nast was able to enjoy until his death on September 19, 1942. Unfortunately in 1954, the house burned to the ground, leaving only the garage.

Two magazine magnates. Two media companies. Readers are loyal to Elle or Vogue; Harper’s Bazaar or Vanity Fair. While the two publishing houses create content around the world, let us not forget their founders’ quiet little spots on Long Island where it all began to blossom.