Born on July 12 was the great Broadway lyricist, Oscar Hammerstein II (1895-1960). Best known for his decade-and-a-half collaboration with Richard Rodgers, today we present a look at the wonderful work he did apart from that partnership.

Hammerstein was the namesake of his paternal grandfather, Oscar Hammerstein I, impresario of both opera and vaudeville, and the son of Willy Hammerstein, genius booker of Hammerstein’s Victoria, New York’s top vaudeville theatre for a time. He attended Columbia and studied to be a lawyer but the lure of the family business was too great.

Though he had promised his father he would steer clear of show biz, following Willy’s demise in 1914, he gradually worked his way in.

Vaudeville vets starred in many of his early productions, many of them written in collaboration with Otto Harbach. Frank Tinney was in Tickle Me (1920) and Daffy Dill (1922). Queen O’ Hearts (1922) featured Nora Bayes and Harry Richman. Gypsy Jim, a straight play penned by Hammerstein in 1924, starred Leo Carillo. 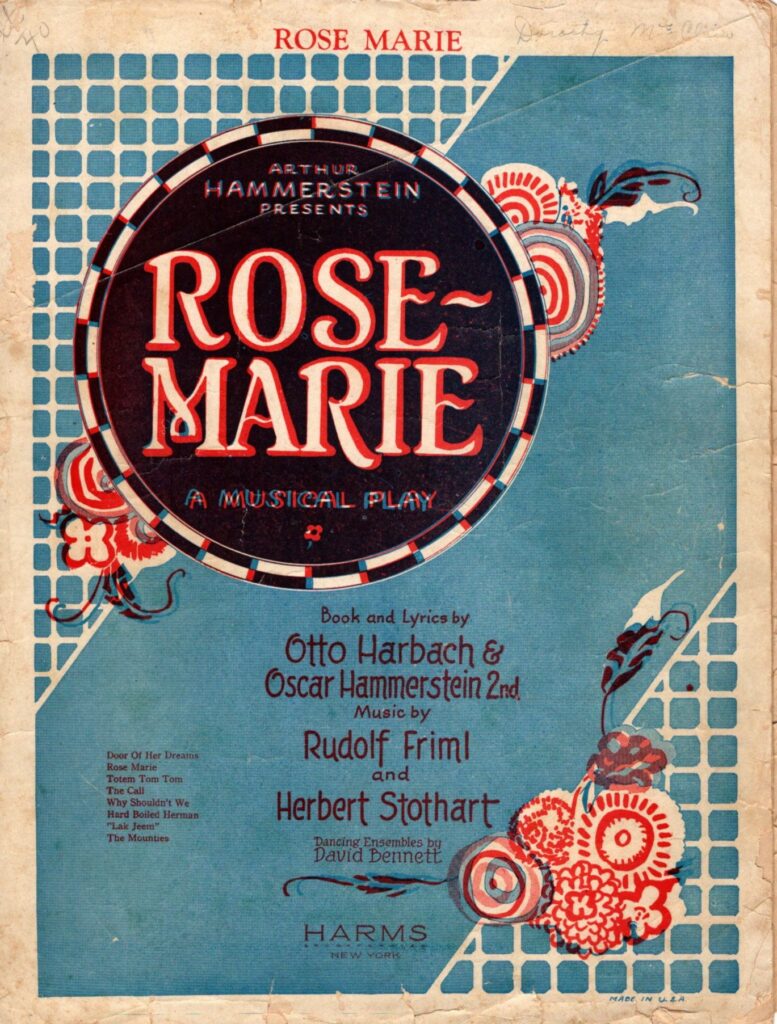 The operetta Rose-Marie (1924-26) is probably the earliest of his shows to be well-remembered, on account of its three movie versions and the many covers of the campy “Indian Love Call”. The 1936 screen version with Nelson Eddy and Jeanette MacDonald is undoubtedly the best known, although there was also one in 1954 with Howard Keel, Ann Blyth, Fernando Llamas, Bert Lahr and Marjorie Main. A 1928 silent version naturally had no songs but starred up-and-comer Joan Crawford.

1925s Sunny was one of a series of hit starring vehicles for Marilyn Miller and featured Jack Donahue and Pert Kelton, with music by Jerome Kern. It was made into a Hollywood film, also starring Miller, in 1930. 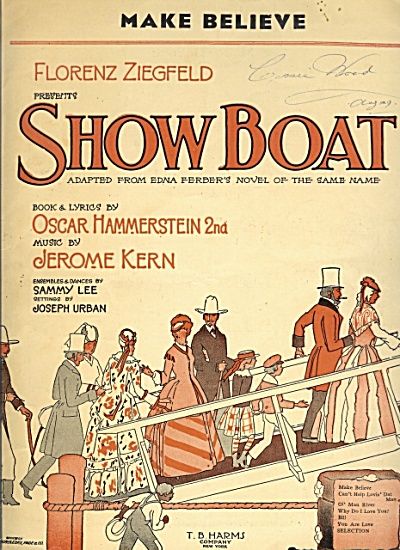 Show Boat (1927), based on the Edna Ferber novel is, in the view of many, the greatest of all Hammerstein shows and one of America’s favorite musicals. Florenz Ziegfeld produced the original production, with music by Jerome Kern, book by Hammerstein, and lyrics by Hammerstein and P.G. Wodehouse. The cast included Charles Winninger, Edna May Oliver, Tess Gardella (Aunt Jemima), Puck and White, Helen Morgan, and Jules Bledsoe. Paul Robeson for whom the part of Joe was written, appeared in later productions. This is a stellar line-up of talent, and they ended up producing a landmark, pivotal Broadway show, one of the first of the so-called integrated musicals (meaning the songs are integrated into the show, i.e., they help tell the story. Although this has to have been one of the first racially integrated shows, too). The (still) popular songs from the show include “Ol’ Man River”, “Can’t Help Lovin’ Dat Man”, “Make Believe”, and Helen Morgan’s showstopper as Julie, “Bill”.

There are three major film versions of the novel, the latter two based primarily on the musical. The 1929 version is based strictly on the book and is essentially a silent, with non-sync sound, music, a little audible dialogue, and just a couple of numbers from the show. It features Laura La Plante as Magnolia, Alma Rubens as Julie, Otis Harlan as Cap’n Andy, Neely Edwards as Schultzie and Stepin Fetchit as Joe. The 1936 version (the best all ’round) was directed by James Whale and has much of the Broadway cast, with the notable addition of Irene Dunne and Allan Jones. The 1951 updated, color version has far less charm, although we do have the bonus of Joe E. Brown as Cap’n Andy and Agnes Moorehead as Parthy (the rest of the cast, Howard Keel, Kathryn Grayson and Ava Gardner are fairly snoozeville).

Good Boy (1928), produced by Hammerstein, featured the hit Kalmar and Ruby song “I Want to Be Loved by You”, popularized by its singer Helen Kane. Sweet Adeline (1929) employed Irene Franklin and Helen Morgan. Ballyhoo of 1930, an Arthur Hammerstein produced show with some material by Oscar, was a flop but is notable for being the last Broadway show starring W.C. Fields. After this, there was also The Gang’s All Here with Ted Healy, Free for All with Jack Haley, and East Wind with Joe Penner (all in 1931). And he contributed some material to Olsen and Johnson’s Hellzapoppin (1938).

Then, around the time he began collaborating with Rodgers, one last major show without him: 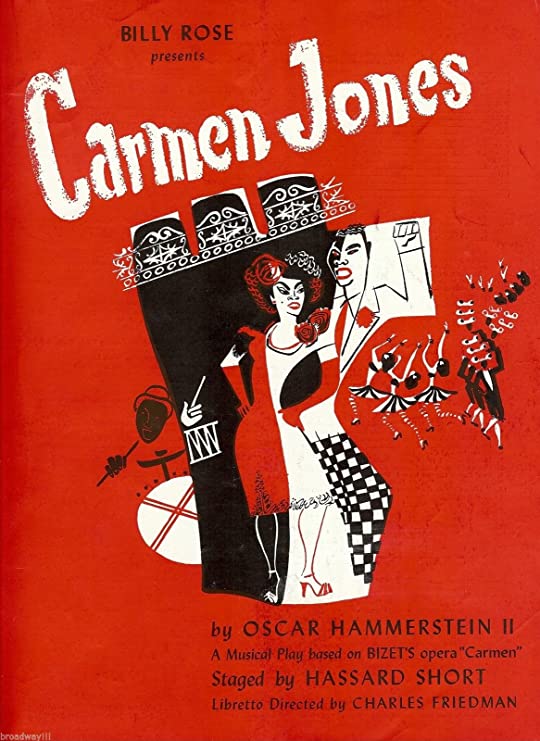 Taking a cue from Mike Todd’s 1939 Hot Mikado, Billy Rose produced Carmen Jones (1943) putting Bizet’s original Carmen score to a new contemporary libretto by Hammerstein, and an all-black cast, with Muriel Smith and Muriel Rahn switching off in the title role. As an all-black American opera with a tragic plot, it also bears a certain relationship to Porgy and Bess. One likes to think that the original Oscar Hammerstein, the songwriter’s grandfather who had a penchant for democratizing access to opera, would have been proud. Otto Preminger adopted this show into a 1954 film starring Dorothy Dandridge and Harry Belafonte, helping to keep it in public circulation.

The local angle to this story, Hammerstein was a longtime resident of Great Neck. He later purchased a farmhouse and estate in Buck’s County, which is where he died of stomach cancer in 1960.

Written by Trav S.D., author of No Applause, Just Throw Money: The Book That Made Vaudeville Famous. Visit www.travsd.com to learn more about Hammerstein and myriad other famous celebrities and historical topics.