The Long Island Aquarium is soliciting donations via GoFundMe to assist them during the coronavirus pandemic. The aquarium is currently closed to the public per...
Read more
Food & Leisure

He was a civic-minded man who coached youth sports, belonged to a long list of organizations.
Read more
TOP STORIES

If the chili-heads who douse their food in hot sauce are a unique breed of people, then those who invent hot sauces are an entirely different species.

The creators of a vast array of mouth-burning, sweat-inducing, flavor-enhancing condiments welcome lovers of all that is hot and spicy to the seventh annual NYC Hot Sauce Expo at the Brooklyn Expo Center on April 13 and 14. The two-day event will feature tastings of various hot sauces, eating contests on the Stage of Doom, and plenty of beer, along with an atmosphere akin to a heavy metal carnival.

Organizing this gathering of freaky folks is Steve Seabury and his Kings Park-based hot sauce company, High River Sauces. Seabury, who began making hot sauce commercially in 2011, has launched expos in California, Chicago and Portland, along with New York City and the NJ Taco Festival and the Metal Alliance Tour. The music industry veteran has also published the cookbook, Mosh Potatoes, which features 147 recipes from rock legends, such as Joey Belladonna of Anthrax, Zakk Wylde of Black Label Society, Lemmy Kilmister of Motörhead, and many more.

Seabury’s burning desire to concoct hot sauces was born out of necessity—and years of eating bland food while on tour.

“When I was in a band traveling and touring I would bring my own hot sauce because a lot of times we would eat the cheapest food on the road,” he said. “As I was making friends through my travels people were really digging the sauces. I started making sauces for friends for their tours. Finally after many years of people telling me I should sell this stuff I decided, why not. In 2011 High River Sauces was born, and we sold our first bottle of hot sauce on the Metal Alliance Tour in Dallas.”

Since then, Seabury’s sauces have become award winning and nationally recognized for their ability to bring the heat while also delivering a unique blend of ingredients that ensures a depth and complexity of flavors. As the hot sauce expert and organizer of the expo, Seabury is a firm believer that the chili-head community is unlike any other group of like-minded individuals—they are bound by heat, a cuisine of conflict and the insatiable need to constantly increase the burn while also showing an appreciation for the culinary merits of a good sauce.

“We all share the passion of healthy food, spicy food and beer. Nothing could be better than that,” said Seabury, whose hot sauce expo attracts some of the industry’s most colorful characters. “The hot sauce expo is like going on vacation. Everyone forgets about all of their problems and just has a great time. There is no other place I would rather be that weekend than the New York City Hot Sauce Expo.” 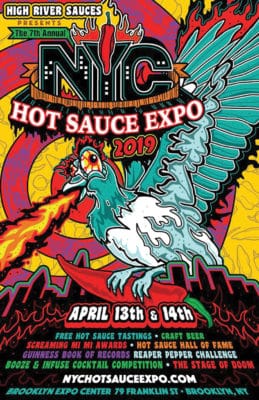 Not only is Seabury the organizer, he has also received many accolades for his array of sauces, which includes (but is not limited to) Hellacious, a devilishly addictive robust and bold sauce with habanero and smoked jalapeño; Tears of the Sun, an intense blend of habanero peppers and tropical fruit; Cheeba Gold, a fiery mustard-based sauce with curry, peach and scotch bonnet peppers; and Rogue, which blends the hottest peppers in the world, such as the scorpion pepper, with blood orange, apples and pears.

“We have been very lucky when we compete throughout the country,” he said. “We love competing, we love representing the beautiful state of New York, we love the chili-head brethren and, of course, we love winning the bling. It inspires me and it is just a lot of fun.”

Besides blazing through awards, High River Sauces has also burned bright in media spotlight. Seabury’s company has had two of his sauces featured on the hot wing challenge/interview YouTube show, Hot Ones, hosted by Sean Evans and presented by First We Feast. The program pits celebrities up against an increasingly spicy lineup of hot wings while the host guides the guest through well-researched questions about their career.

Each season, the show updates its hot sauce array and making it onto the show is a major badge of honor for any proprietor of extreme condiments. And Seabury’s High River Sauces has done it twice: first appearing in season two with Rogue and in the most recent season with Cheeba Gold. Seabury said that getting any of his sauces featured on Hot Ones is like winning the lottery, as it immediately raises his company’s profile in the passionate hot sauce community.

“I really love the Hot Ones series. I’ve been a big fan from season one,” he said. “The show has really helped out immensely with raising the profile of High River. We have gained a much larger fan base because of it. It’s such an amazing feeling to be in the same lineup as the other sauce makers on the show.”

And this month, the scorching story continues. So whether you like your sauce mildly spicy or straight from the fires of hell, you will be among friends at the New York City Hot Sauce Expo.

“At High River, we focus on ingredients that complement the pepper and the food we put it on. I really love the heat and sweat of a hot sauce to elevate the food I am enjoying for a meal,” he said. “I am a medium-heat style person, but at least a couple times a month I want to destroy everything with the hottest stuff I can find. Living life on the edge.”