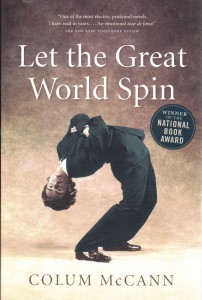 New York Times bestselling author Colum McCann is visiting the Manhasset Public Library’s Community Room at 30 Onderdonk Ave. on Wednesday, March 25, at 7:30 p.m. The event is open to the public and there is no admission fee.
Let the Great World Spin, for which McCann won the 2009 National Book Award, is his best-known work and while it is fiction, its storyline is pegged to an actual event, acrobat Philippe Petit’s August 1974 high-wire walk between the World Trade Center’s two towers in lower Manhattan.

The Friends of the Manhasset Public Library, a group of volunteers, is presenting McCann’s appearance, and seating for members of the organization will begin at 7 p.m. General seating starts at 7:15 p.m. Friends has recruited other writers with local ties to its previous gatherings, such as Manhasset natives J.R. Moehringer (author of The Tender Bar, the 2005 memoir whose title references Publicans, a Plandome Road tavern which stood where Edison’s operates today) and Erin Duffy as well as Manhasset resident Bill O’Reilly, the Fox News Channel host who has also made a name for himself on the Times’ best-seller list, most recently, along with his collaborator Martin Dugard, for Killing Patton.

“I believe in the democracy of story-telling,” McCann said, in a recent interview. “I love the fact that our stories can cross all sorts of borders and boundaries. I feel humbled by the notion that I’m even a small part of the literary experience. I grew up in a house, in a city, in a country, shaped by books. I don’t know of a greater privilege than being allowed to tell a story, or to listen to a story. They’re the only thing we have that can trump life itself.”
Born in Dublin, Ireland, the 50-year-old McCann resides in New York City with his wife Allison and their three children, Isabella, John Michael and Christian. He began his career as a journalist and also teaches these days in Hunter College’s Creative Writing Program. Transatlantic, released in 2013, is his most recent book. McCann’s resume also includes a screenplay, 2000’s When the Sky Falls, a film based on the real-life Irish investigative reporter Sinead Hamilton, who was portrayed by three-time Academy Award nominee Joan Allen.

The Friends of the Manhasset Public Library’s origins date back to the mid-1970s, and they were formed originally to supplement existing library programs, such as providing light refreshments for attendees. Since the late 1980s, Friends has broadened its mission and that has led to Manhasset talks and book-signings by literary notables such as Nelson DeMille of Garden City and author and former New York Times op-ed columnist Anna Quindlen. An aside: DeMille’s latest, Radiant Angel, will be published on May 26 and features his signature character, John Corey.
In addition, the Manhasset Public Library’s lobby is displaying this month an extensive collection of Frances Hodgson Burnett’s (1849-1924) first editions. Burnett, a children’s book author, wrote The Secret Garden while residing in Manhasset, and the Friends of the Manhasset Public Library secured the Burnett memorabilia visitors see upon walking in the library’s main entrance.

The Friends’ 2015 membership drive is going on now. They currently have more than 160 members and hope to have that number exceed the 200 mark by June. For additional information on the group, send an email to friendsofthemanhassetlibrary@gmail.com.