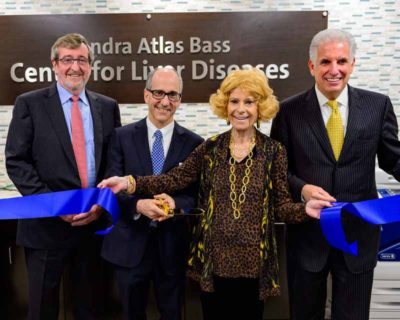 The $4.5 million, 10,000 square-foot center, named for Northwell Health’s most generous philanthropist, was established to care for a growing population of patients living with diseases of the liver, which affect an estimated 30 million Americans. In addition to the Center for Liver Diseases, the facility houses North Shore University Hospital’s Division of Hepatology.

Among the speakers celebrating the official opening was David Bernstein, MD, chief of hepatology at North Shore University Hospital and Long Island Jewish Medical Center, who told a room filled with donors, physicians and medical staff that the creation of this center had been his dream since he joined Northwell Health 17 years ago. “This center will make a tremendous difference in the way we treat our patients living with liver disease,” he said. “Our patients are sick, and they need a destination for their medical treatment. We are so grateful to Ms. Bass for the support she has shown us through the years.”

Larry Sypowicz, 65, of Bellerose, recounted his lifelong struggle with Hepatitis C and how he was finally cured last year by a relatively new drug called Harvoni that was prescribed by Dr. Bernstein.

When Sypowicz was 16, he received a blood transfusion following hip surgery. As an adult, he enjoyed making regular blood donations. Everything changed in 1990, when he received a card in the mail from the American Red Cross. The message was shocking—no more blood donations because his blood indicated the presence of non-A, non-B hepatitis (the previous name for hepatitis C).

“For the next 20 years, I was in constant search of a cure,” said Sypowicz. “I tried Interferon, and for the three years I stayed on that program, I was constantly tired and depressed. I was afraid I would have to live in this unhappy state until my luck changed in 2014.”

While in his doctor’s office, Sypowicz read an article about Dr. Bernstein and immediately made an appointment. During this visit, he was told about Harvoni, a groundbreaking new drug that promised a cure. “At the time, Harvoni was quite expensive,” he said. “I was told it cost $94,000 for a 12-week program, and I needed the drug for 24 weeks.”

Thanks to the intervention of Dr. Bernstein and his staff, Sypowicz was able to procure grants and financial aid that allowed him to receive Harvoni (after his request was denied by his insurance company). “Within seven months of starting Harvoni, I was declared hep C free,” he said. “I feel great. Life is beautiful and I am so glad to be here today to thank Dr. Bernstein and Ms. Bass for making this center possible.”

Bass, a long time donor to NSUH, LIJ Medical Center, Cohen Children’s Medical Center and the Feinstein Institute for Medical Research who continues to serve as a life trustee of Northwell Health, said: “I am so grateful to be able to do this. We know that diseases of the liver are on the rise; it’s a great pleasure to know that this center will help so many people in need.”