Nile Rodgers Gets Ready To Freak Out And Dance (FOLD) 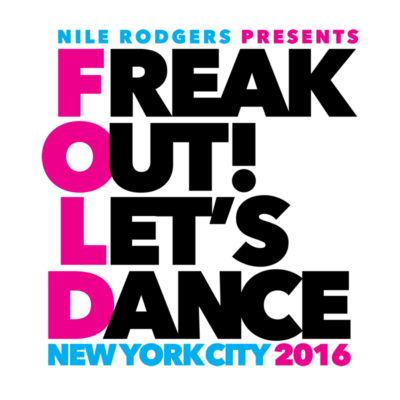 The poet Edwin Denby once said, “There is a bit of insanity in dancing that does everybody a great deal of good.” It’s a sentiment that’s at the heart of Freak Out, Let’s Dance (FOLD), a dance music festival that’s been spearheaded by renowned musician/producer Nile Rodgers. The latest installment will be happening on Saturday, Oct. 8 at Forest Hills Stadium, where Rodgers and his band Chic will be appearing on the same bill as Earth, Wind & Fire, The Village People, DJ Cassidy, Alex Newell and DJ Nicky Siano of Studio 54. The evening will culminate with Bette Midler wrapping things up while playing with Rodgers and Chic as her backup band. It’ll be first for he and is happening because Rogers, who is an old friend, asked.

“Bette is my friend. I said that I knew she was starting a new show but I wanted to know if she could do this for me and she said sure,” Rodgers explained.
Having been at the center of a similar 11-hour dance festival held in his honor during the Montreux Jazz Festival in Switzerland a few years ago, Rodgers was looking to capture a similar experience that found disparate acts like Grace Jones, Chic, Johnny Marr, Mark Ronson and Taylor Dayne sharing the same stage. With this being the third time the festival is being held in the States, the New York City native was looking to capture that same kind of eclectic bill that found him hosting it on the East End of Long Island last year with a lineup that included Chic, Duran Duran, Pharrell Williams, Chaka Khan, Keith Urban and Beck over the course of a weekend. The eclectic nature of these bills make for a special concertgoing experience, particularly when you throw a wild card like Urban into the mix. Rogers gets a kick out of recounting how splendidly that particular booking move worked out at last year’s FOLD.

“Last year, nobody would have believed that Keith Urban would have worked. Everyone was questioning me because I had Pharrell Williams, Chaka Khan, Duran Duran, Beck—and all these other cool people. And I had people asking me why the hell I had Keith Urban on the bill. Meanwhile, he stole the show, because we’re all cut from the same DNA. Especially when we’re real musicians, meaning that our job is to go out and perform the music, not to push a track and sing,” Rodgers recalled. “Keith was a curveball last year and wound up stealing the night. It was because of pure musicality and expertise. It made me feel so proud. The one guy everyone was grumbling about wound up stealing the show. You should have seen Pharrell on the side of the stage. His eyes were glued to us and he had a look on his face that said, ‘What the hell was that?’ We turned the place into Woodstock for 15 minutes. We became a jam band.”

It’s those kinds of moments that Rodgers is trying to capture. So much so that he scuttled a similar three-day show that was supposed to be held in the same Long Island venue on the East End this past August. Instead, the New York City native regrouped and is having this one-night only show in Forest Hills Tennis Stadium with the idea of concert-goer convenience being the motivating factor given the mass transportation options available for this venue.
“When you think in terms of America, we’re a real consumer society. What’s happened is that we’ve gotten really spoiled by the fact that we can choose anything we want and we don’t have to put up with anything. That’s sort of made us small-minded,” he explained. “I want to have a concert where a person can just get on the subway, show up by themselves and have a great time and meet people, I don’t want the travel to be an impingement. And as much as I loved my other venue—and I loved it, I wanted to buy that place—I realized that the traffic and lack of hotels were an impingement. No matter what I did, I couldn’t magically spring up buildings. I may not think it’s that big of a deal because I’m in New York and I don’t mind driving out and back. But to certain people, that is a big deal to them in the summer. We don’t have the same kind of vacation time as they do in Europe. Everything is a big deal.”

Fostering a communal vibe steeped in the rhythms and freedom of dance music is at the heart of what Nile Rodgers envisions happening with every Freak Out Let’s Dance festival. There’s a definite old-school ambiance to it that’s steeped in quaint nostalgia. And Rodgers wouldn’t have it any other way.
“When I was a kid, one of my first lessons was that the playing and the listening of music requires a certain amount of effort on both parts,” he said. “Nowadays, we’ve taken the pain points out of listening. It doesn’t take much effort at all. If they’re playing something you don’t want, you just switch, switch, switch. That’s not how it was when we were younger. We used to have to go out and convince you that songs we were playing were cool. I’m just trying to bring that vibe back.”