In December 1859, more than 130 Long Island political figures showed up at Hewlett’s Hotel, at Front and Main in Hempstead, for a banquet in honor of David R. Floyd-Jones, scion of some of Long Island’s oldest families and New York’s Secretary of State-elect.
After a series of toasts (“The honored son of the banner county of our glorious state…” gushed former Congressman John Searing), Floyd-Jones gave his gracious response. He noted that “I am in part indebted for my success to the aid that the American Party gave me, not only in this county but throughout the state.”
The American Party had already disbanded in some states and had faded almost everywhere, but in much of New York and on Long Island it was holding on. Eight of the nine statewide officials elected in the 1859 election, including five Republicans and three Democrats, were endorsed by the Americans. 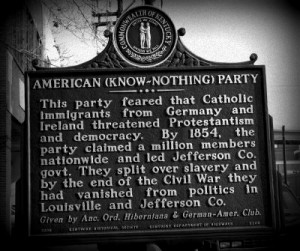 The American Party is better remembered by its unofficial name, the Know-Nothing Party, which sounds pejorative but was embraced by the party’s members as an homage to its beginnings in secret nativist fraternal orders, like New York City’s Order of United Americans (OUA). Members were instructed to say they knew nothing if asked questions about what happened at meetings. Some pro-Know Nothing newspapers, like the Sag Harbor Corrector, often referred to the party by the codename “Sam,” as in “…the county will give a tremendous majority next fall to Sam.”
At the meetings, Know-Nothings took oaths swearing that they were born in this country and that they would never vote “for a foreigner or Roman Catholic.”
After several years of testing their ability to affect political contests, the OUA and its allies came out, guns blazing, in early 1854. Organized across New York and every other state into local councils, striking at a time when many citizens had lost confidence in the established parties’ ability to solve anything, Americans began sweeping into office. 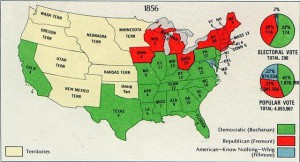 Americanism’s appeal differed in each region. Southerners had figured out that most people from other countries were nauseated by American slavery and they wanted to close up that spigot. In California, the party was organized in opposition to Chinese immigration. In New York, a lot of people were alarmed by the waves of German and Irish immigrants. These groups overwhelmingly became Democrats. Sure, they were recruited by urban political machines like the Tammany Democrats in Manhattan, but also they had reason to believe that some Whigs and Republicans maybe hated their guts.
New York Republicans worked hard to make fusion with the Americans, shifting party policy to support an alcohol Prohibition Law (struck down by the courts) and the first voter registration law (cities only). Republicans now favored restricting voting rights of naturalized citizens.
One-third of New York’s state legislators elected in 1854 were Americans, who made up the largest faction in the State Assembly.

After weeks of deadlock, Americans stalled at 41 out of 128 votes and lost the Assembly Speakership. Worse, Know-Nothings across the country were disheartened when their New York brethren lost the biggest prize of all: William Seward’s political head.
In an amazing comeback from an apparently hopeless situation, Seward was re-elected to the U.S. Senate by the legislature in February 1855.
Seward, a giant of the anti-slavery movement who had spent years building personal ties to New York Catholic leaders, offered something for every Know-Nothing to hate. 30 American legislators defected to Seward, partly because of promises of federal patronage jobs and other side deals, but mostly because most New York Americans were deeply opposed to slavery, seeing Americanism and freedom as almost synonymous terms.
The issue of slavery wrecked the national party. Most New York Americans became Republicans, helping to set voting patterns for more than half a century.