After working boat shows for more than 20 years all along the East Coast, Rich Johnson is an expert at running some of the most professional and profitable expositions in the area. And now, for the eighth time, Johnson is bringing the New York Guitar Show and Exposition to Long Island from April 27 to 28.

With almost 100 exhibitors displaying anything from guitar straps to rare, one-of-a-kind custom guitars, there is sure to be something for everyone at the Freeport Recreation Center, where the Expo will be held. The new space opens up almost 10,000-square-feet for the nearly 2,000 people that come together at the Expo every year.

“We want to give people a ton of reasons to come,” Johnson said. “So anyone who pays the $10 entry [fee] can find something they’re interested in. Whether it’s a $10 strap or a $30,000 custom guitar, there’s something for everyone here, for all different generations of music fans.”

The Expo creates a great community, a network of exhibitors, fans and musicians from all across the country who come together to share ideas, jam out and support each other’s businesses. The event is full of the kind of things you might not even know you needed like a power strip that turns off one plug at a time to keep your amps from shorting or vintage gear from exhibitors like Gbase. Johnson especially pointed out the huge number of custom guitar builders they bring in each year, who pass down their knowledge of the delicate craft of building guitars to young kids looking to learn about music or to grizzled veterans just looking to talk shop.

“We really have a lot of great custom builders this year,” he said. “Both from Long Island and all over the place. There’s an exhibitor we’ve got this year called Rockaway Relic Guitars, they’re from Long Island and they started building guitars after Hurricane Sandy, from the wood from the boardwalk. It’s a great connection to the community and we’re very pleased to have them this year.” 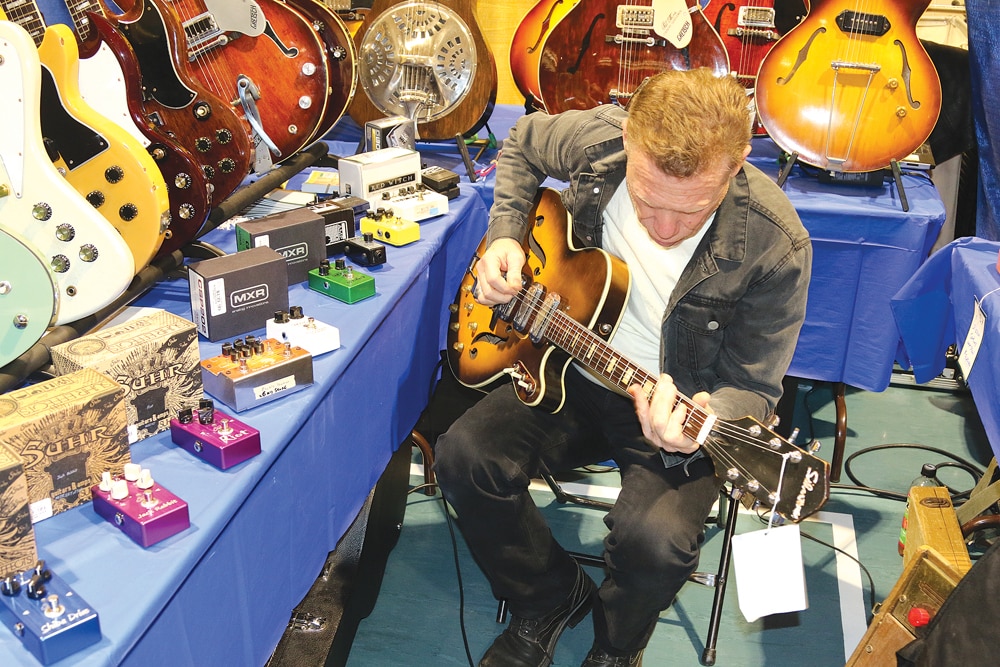 But local flavor isn’t the only thing that makes this show a must-see. The Expo will also include relics and creations from some of the most influential names in rock, including an extensive Les Paul exhibit led by Jim Wysocki, a longtime friend of Paul’s. The program includes some of Paul’s lesser-known work, like some original inventions including one of the first ever reel-to-reel tape machines, built by Paul himself. The exhibit is one of the most complete and interesting accounts of the artist’s life and a must-visit for anyone interested in the history of rock ‘n’ roll. The Expo will also include a booth from California-based Taylor Guitars, one of the top guitar manufacturers in the world.

With so many music junkies all together in one place, it would be nearly criminal to not give them a chance to show off their skills in front of an audience with an Open Mic After Show party, which will take place on Saturday of the event. The open mic requires a RSVP, but it will be open to all visitors, not just exhibitors. It will take place at the Half Way Down in Freeport, from 7 p.m. on Saturday, April 27.

The New York Guitar Show and Exposition will take place at the Freeport Recreation Center at 130 East Merrick Rd. in Freeport, from April 27 to 28. Tickets for adults will be $10, while children under 12 can enter for free.