rotect your family from COVID-19 by practicing and promoting everyday healthy habits. The Centers for Disease Control and Prevention have provided this checklist to plan...
Read more
Cover Story

Pandemic spurs specialty foods wholesaler to open up first-time home delivery service With the COVID-19 pandemic upending everything up to and including the economy, businesses...
Read more
TOP STORIES

More than two-thirds of Americans say an incentive of as little as $2 per day would motivate them to devote at least an hour each day toward improving their health, while nearly 60 percent of people say they would be more likely to participate in a fitness routine if the program offered an opportunity to socialize or make friends, according to a new nationwide survey.

These are some of the findings from the 2019 UnitedHealthcare Wellness Checkup Survey, which examines people’s opinions about health topics and preferences, offering insights to help improve employer-sponsored well-being or disease-management programs. The survey’s key findings include:

More than half (57 percent) of survey respondents said they would be more likely to consistently participate in a fitness routine if the regimen provided a social component, either in-person or virtually. Among employees with access to a well-being program, 67 percent said it was important that their significant other or family members have the opportunity to participate, too. Across all respondents, more than two-thirds (68 percent) said an incentive of as little as $2 per day would motivate them to devote at least an hour each day toward improving their health.

More than half (53 percent) of survey respondents anticipate being able to accomplish everyday activities until 80 or older, including 11 percent saying those tasks will “never” be an issue. Gen Xers—defined as people between 39 and 54 years old—were the most optimistic, with nearly three-quarters (74 percent) expecting to maintain their health beyond 80, including 15 percent saying health issues will never prevent them from accomplishing everyday tasks. However, one study concluded that 42 percent of Americans 80 or older have functional limitations, such as the inability to walk a flight of stairs.

Survey respondents considered a healthy diet, such as eating fruits and vegetables, as the top priority when trying to improve their health, with a mean score of 4.5 (5 being “extremely important”). That was followed by access to routine medical care, such as an annual physical (4.4); stopping smoking and/or reducing drinking (4.4); getting sufficient sleep (4.3); engaging in strength or cardiovascular training (4.3); increasing social activity (3.7); and improving mindfulness (3.6).

About one-fifth (22 percent) of survey respondents correctly recognized that 80 percent or more of the incidence of premature chronic conditions, such as heart disease, stroke and diabetes, are generally caused by modifiable lifestyle choices, such as risk factors like smoking or obesity, as opposed to being caused by genetic factors. More than one-third (38 percent) thought between 50 percent and 79 percent of premature chronic conditions were caused by lifestyle choices, while 32 percent said genetics were to blame for more than half of these diseases. 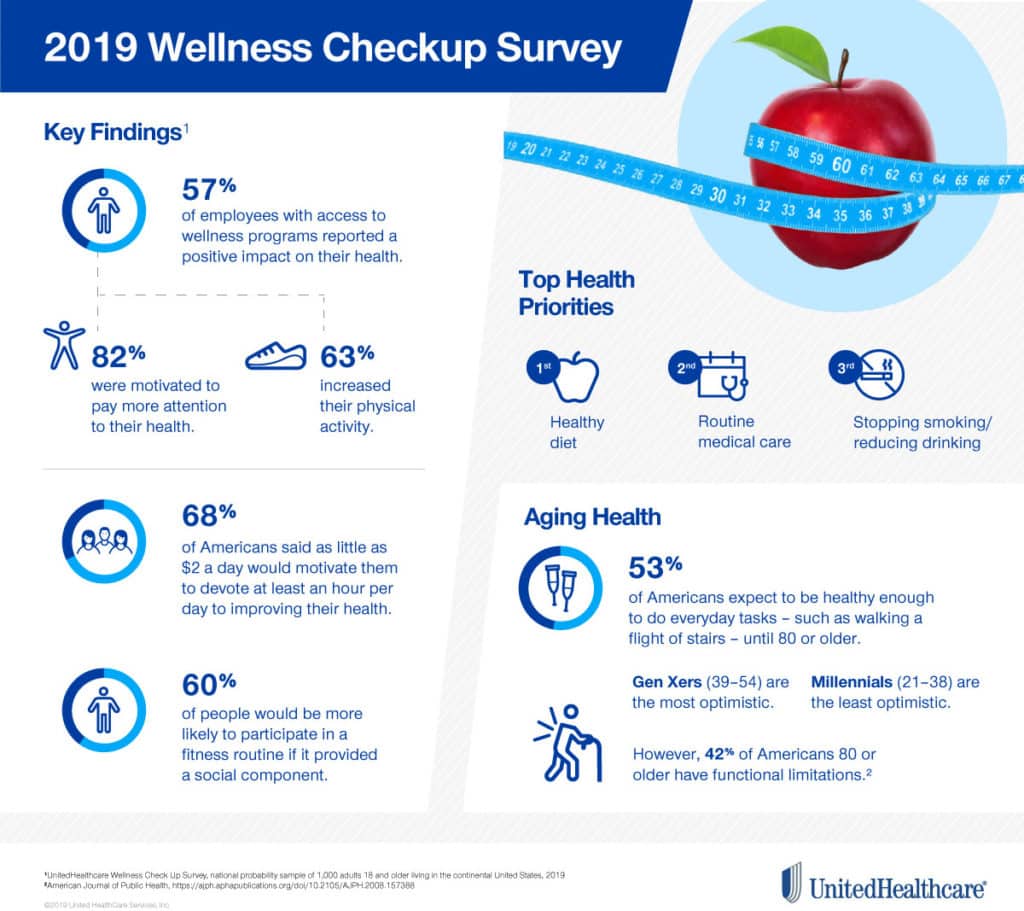 “This year employers are expected to invest an average of more than $3.6 million on their respective well-being programs, and over 60 percent of employees are interested in engaging in these initiatives. The UnitedHealthcare Wellness Checkup Survey provides insights that we hope can be helpful to enhance the design and implementation of well-being programs, which may help improve employees’ health, reduce absenteeism and curb care costs,” said Rebecca Madsen, UnitedHealthcare chief consumer officer.

Many U.S. companies are investing in wellness programs, with more than two-thirds (67 percent) of companies planning to expand these initiatives during the next few years, according to a recent study by the National Business Group on Health. A separate study published in The American Journal of Cardiology concluded that one employer’s well-being initiative generated a six-fold return on investment and reduced health risks for people enrolled in the program.

Many Employees Say Well-being Programs Have Improved Their Health, Productivity

More than half (57 percent) of people with access to wellness programs said the initiatives have made a positive impact on their health. Of these, 82 percent said they were motivated to pay more attention to their health; 63 percent said they increased physical activity; 59 percent improved their diet; and 30 percent reported improved sleep. More than one-quarter (27 percent) said the program helped detect a disease or medical condition, while 8 percent said they stopped smoking or using nicotine.

Among employees without access to wellness programs, 70 percent of respondents said they would be interested in such initiatives if offered, including 43 percent who are “very interested.” More than three-quarters (77 percent) of Gen Xers said they wanted access to a well-being program, more so than any other age group.