When Sesame Street came to life on Nov. 10, 1969, the colorful world of Muppets immediately resonated with children and adults alike, bridging many cultural and educational gaps with a fun learning program. Lead by Big Bird, the cast of characters has grown immensely to include new faces and friendly neighbors. Like Karli, the fuzzy green Muppet, who was introduced as the latest character to join Sesame Street. Karli is in foster care because her mother is recovering from an opioid addiction. It is the that she meets 10-year-old Salia, a real girl whose parents have also struggled with addiction.

“For any sickness, people need treatment to feel better,” said Salia in an episode. “My mom and dad got treatment, and that makes me feel happier for them. I remember the hard times, but I write down things that I feel inside,” she added, noting that journaling and mediation help her cope.

Introduced in part with the initiative Sesame Street in Communities, which offers online-only resources to help adults explain difficult issues to children, the introduction of Karli is reflecting upon current real world issues that kids face today.

For the past 50 years, Sesame Street has been a source of not only entertainment, but comfort as well for children, especially those who are going through a difficult time or stressful situation. The network hopes that the introduction of the new Muppet will help break down the stigma surrounding addiction, further teaching them about empathy and to have compassion for others.

But this isn’t the first time the show has taken on a sensitive topic. Lily was the first homeless Muppet on Sesame Street while Julia, who was introduced in 2017, is the first character with autism. Dr. Jeanette Betancourt is the senior vice president of U.S. Social Impact and the point person for “Sesame Street and Autism: See Amazing in All Children” social impact initiative, a program that has been in the works for the past five years.

“We saw a need based on the number of children impacted, which is one in 68,” said Betancourt on the character of Julia, whose inception came about from the regional initiative that launched in October 2015 with resources including videos, parent tips and interactives all focused on bringing about a greater acceptance for autism. 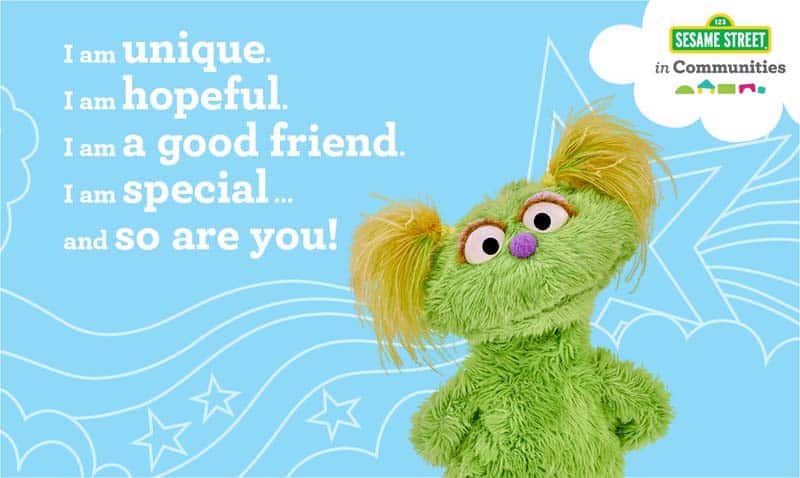 Bright and cheery with fiery orange hair, Julia is sweet and loving and has a great deal of lessons to teach viewers at home.

“The goal for Julia and the entire initiative is really for adults and children to have a greater understanding and acceptance of difference and find what all children share in common,” said Betancourt. “Throughout Sesame Street’s series, we have represented abilities and disabilities and we have a great reputation of doing that. For this initiative, we want to make sure we do it well and thoroughly for Julia, and we will keep her and do much more with her, exploring more areas of autism consistently.”

As for Julia’s impact on viewers as a whole, Betancourt said research has shown significant changes in the understanding, acceptance and inclusion both from families with children on the spectrum and those with children developing autism.

In regards to Karli, the show’s decision to tackle addiction was greeted with mixed messages, from those who appreciate and applaud the resources help break down stigma and teach kids that they’re not alone to parents and commentators expressing understandable concern that young children are not and should not be ready to learn about addiction. They argue that such mature, all be it real life issues are prohibiting kids from being kids and crossing a line.

But whatever the reason for a new character, the welcome mat will always be rolled out, welcoming those to Sesame Street.

For more information on Karli and Julia, visit www.sesamestreet.org.

Previous articleClassic Characters: Iconic Muppets of Sesame Street
Next articleA Collective Thanks To Our Veterans