New Jersey Museum Presents There & Back: The Journey To Vietnam And Home

The New Jersey Vietnam Era Museum recently unveiled a new exhibition, There & Back: The Journey to Vietnam and Home, taking visitors on a journey there and back through the eyes of soldiers and flight attendants traveling to and from the war, by both sea and air.

The Vietnam War witnessed the transition of service personnel traveling in and out of the war zone via the Maritime Sea Transportation Service troopships to chartered airliners, including Pan American World Airways, Trans World Airlines, and United Airlines. Featuring over 40 objects drawn from the museum’s holdings and private collections, the exhibition is on display at the Vietnam Era Museum until March 15, 2023. It draws deeply from personal accounts and memorabilia. 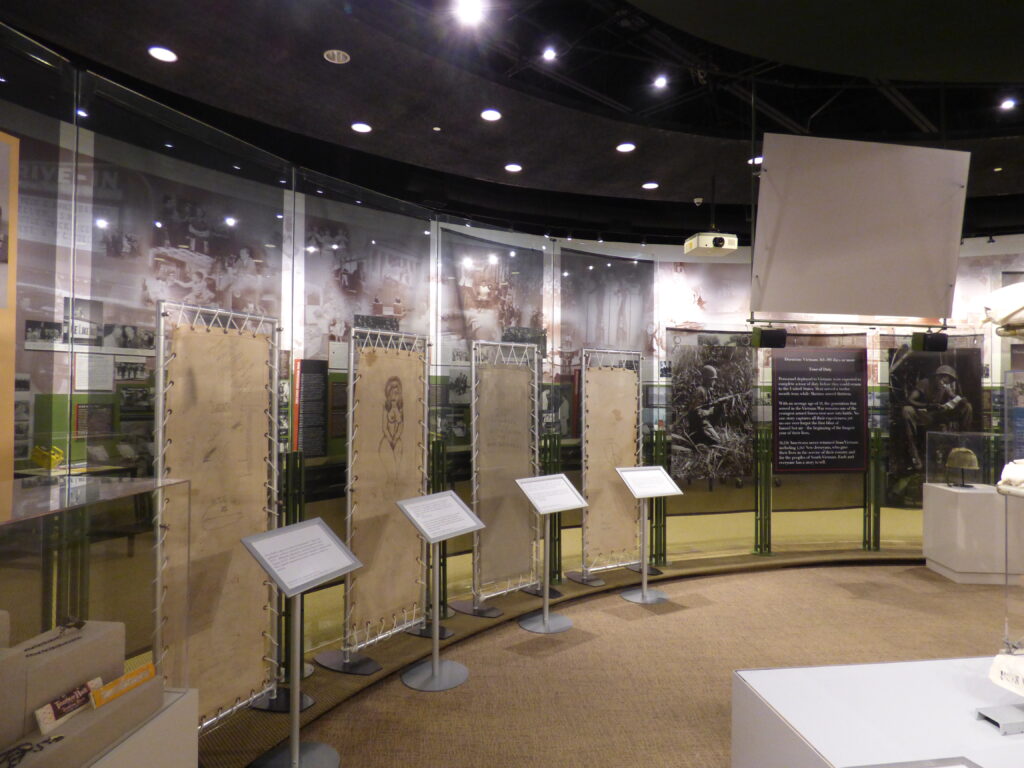 Highlights from the exhibition include a recreated troopship compartment featuring an authentic Vietnam Era bunk unit salvaged from the United States Naval Ship, U.S.N.S. General Nelson M. Walker, four vintage canvas bunk mats covered with names of loved ones, hometowns, art, and graffiti messages left by troops, and a collection of lost and discarded personal items left aboard during the ship’s voyages back and forth to Vietnam between 1966 to 1968.

Historic images capture the claustrophobic life aboard the troopships and a model that will compare the size of General Nelson M. Walker to the Vietnam Era Museum. 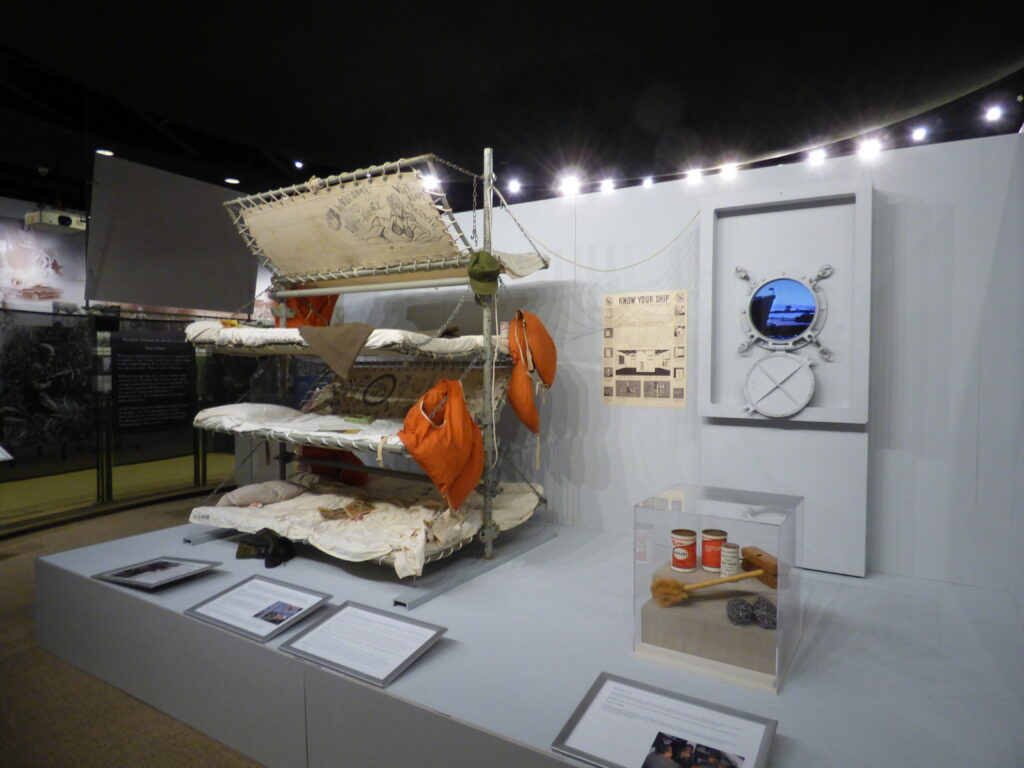 In 1965, chartered commercial airlines began transporting troops into Vietnam, and by 1970, airlines had carried more than five million soldiers and nearly 575,000 tons of cargo. 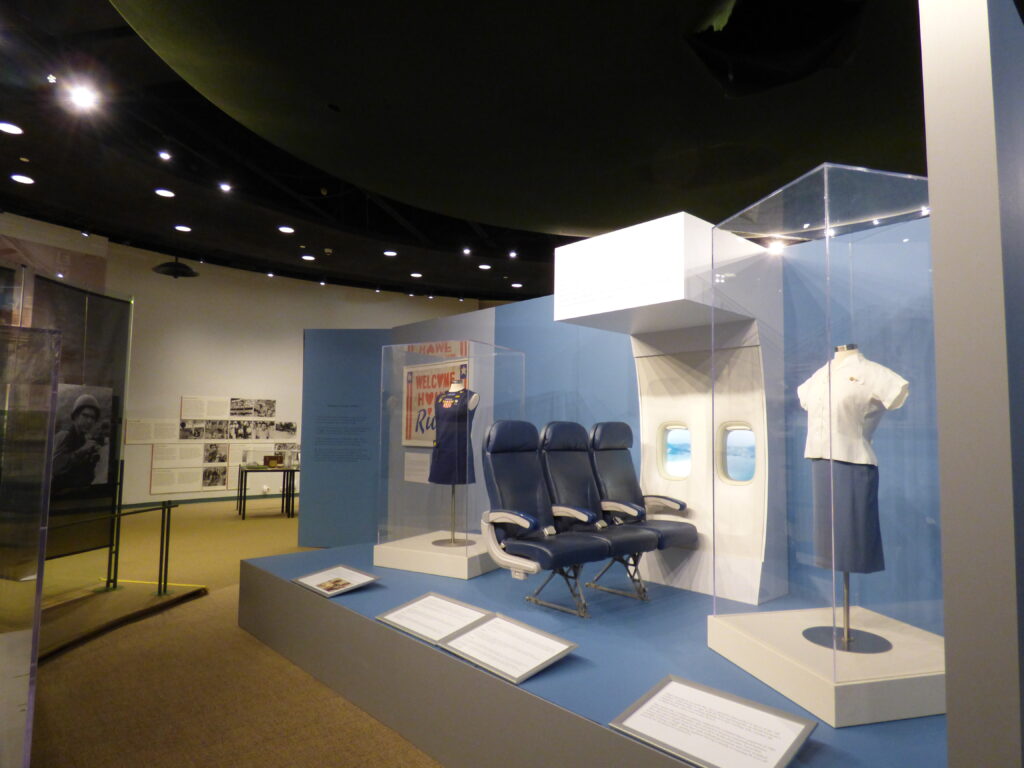 Historical images and rare in-flight photos provide visitors a glimpse of the airline industry’s role in the war, primarily forgotten outside of military and aviation circles. A recreated three-seat section from the fuselage of an airliner helps guests experience the 24 to 48-hour journey from Vietnam back to the United States. A window panel display highlights the view veterans would see as they left Vietnam, a critical moment when they realized they were finally on their way home. Central to the exhibition is the experience of women flight attendants. When few professional opportunities existed for women, airline service offered an international calling to educated young women, but many never expected to fly into a war. 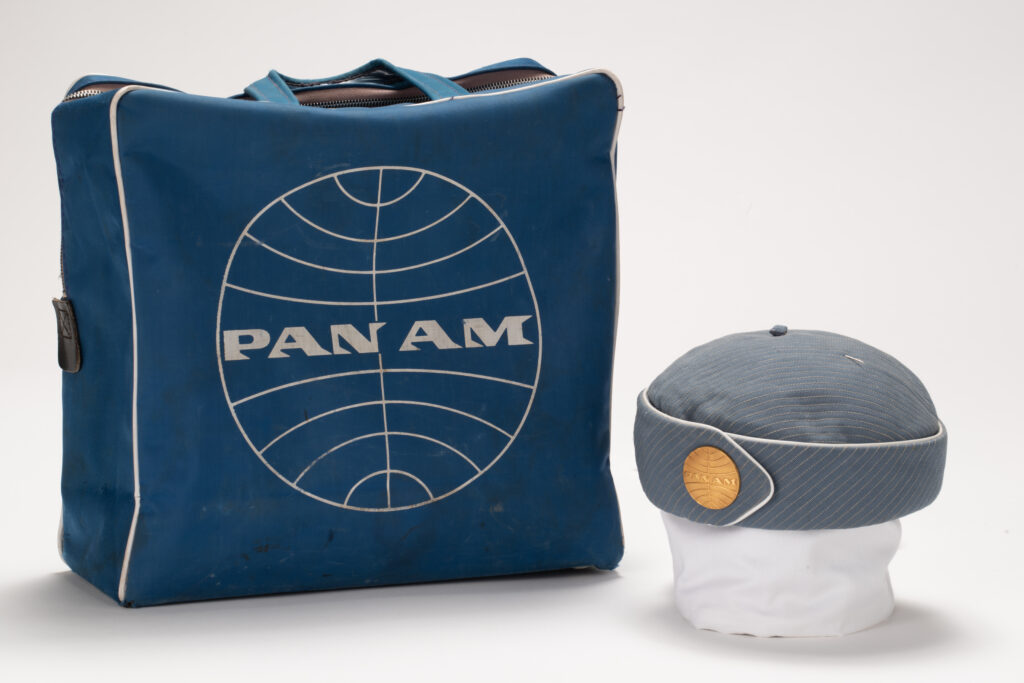 The exhibition showcases a rare, never before shown, TWA flight attendant smock decorated with patches and medals given to her by a homeward-bound soldier, in addition to a collection of Pan American Airlines items related to the airline’s comprehensive Vietnam War service. 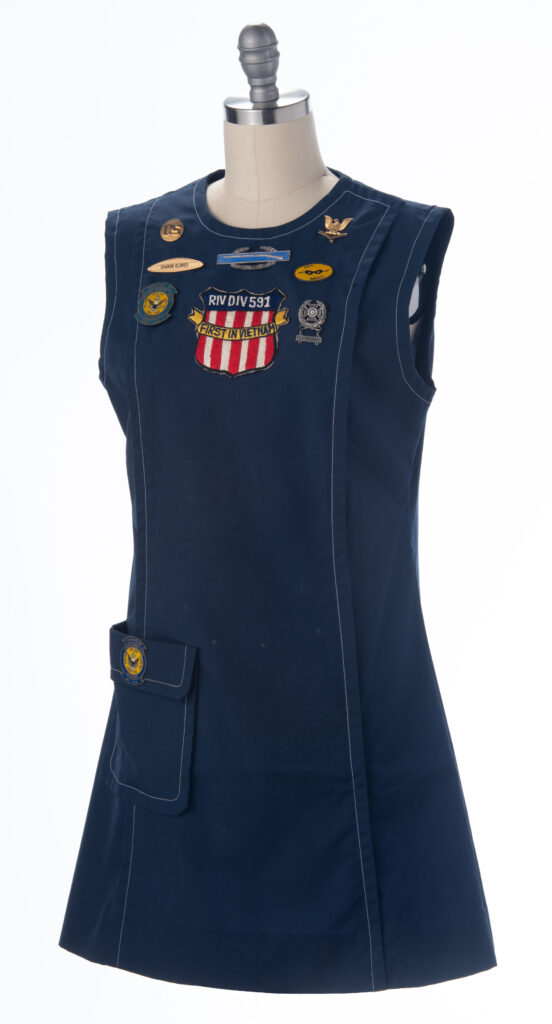 “There & Back explores the experience aboard troopships and jetliners as an unexpected waiting room of the Vietnam experience,” said Mike Thornton, Curator of Collections & Interpretation. “A place where young men were caught in limbo between one place and another, while young women strove to offer valued support and assurance no matter how short-lived to our troops.” 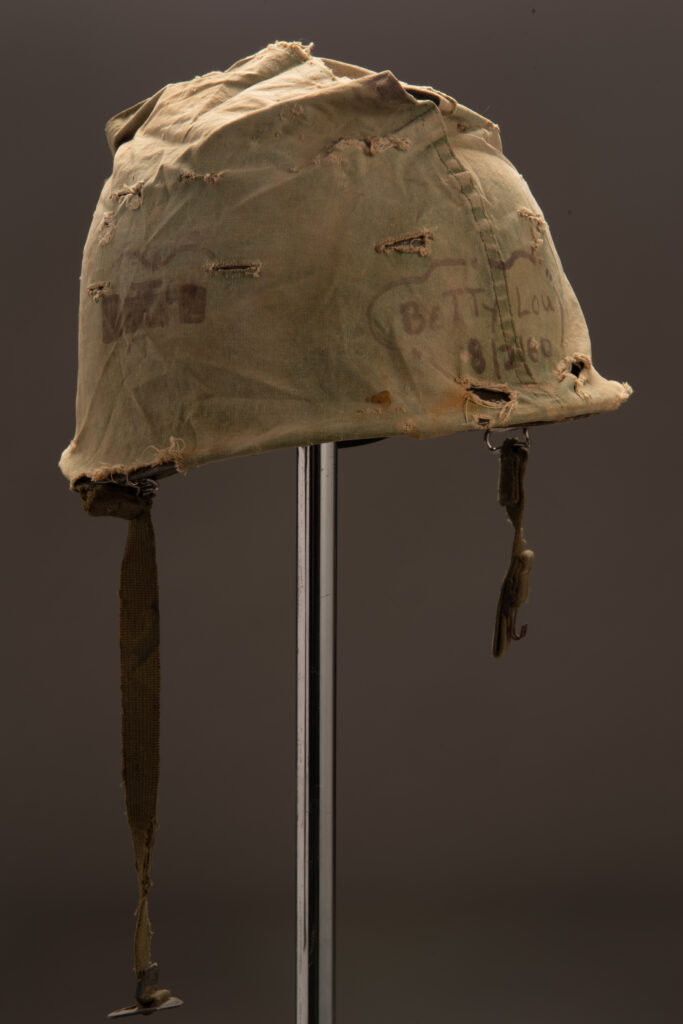 The exhibition marks the first time that the graffiti-covered helmet of Hawthorne, New Jersey native Marine William “Billy” Dutches, killed in action in 1966, will be displayed. Soldiers frequently adorned fabric-covered helmets with the names of their girlfriends, hometowns, and schools. After his death, Dutches’ helmet was recycled and remained in Vietnam. Decades later, a collector found the piece and, curious about the helmet’s graffiti, tracked down his family in New Jersey. After 50 years, his helmet was returned to his family and is now on an enduring loan to the Vietnam Era Museum courtesy of the Dutches family. 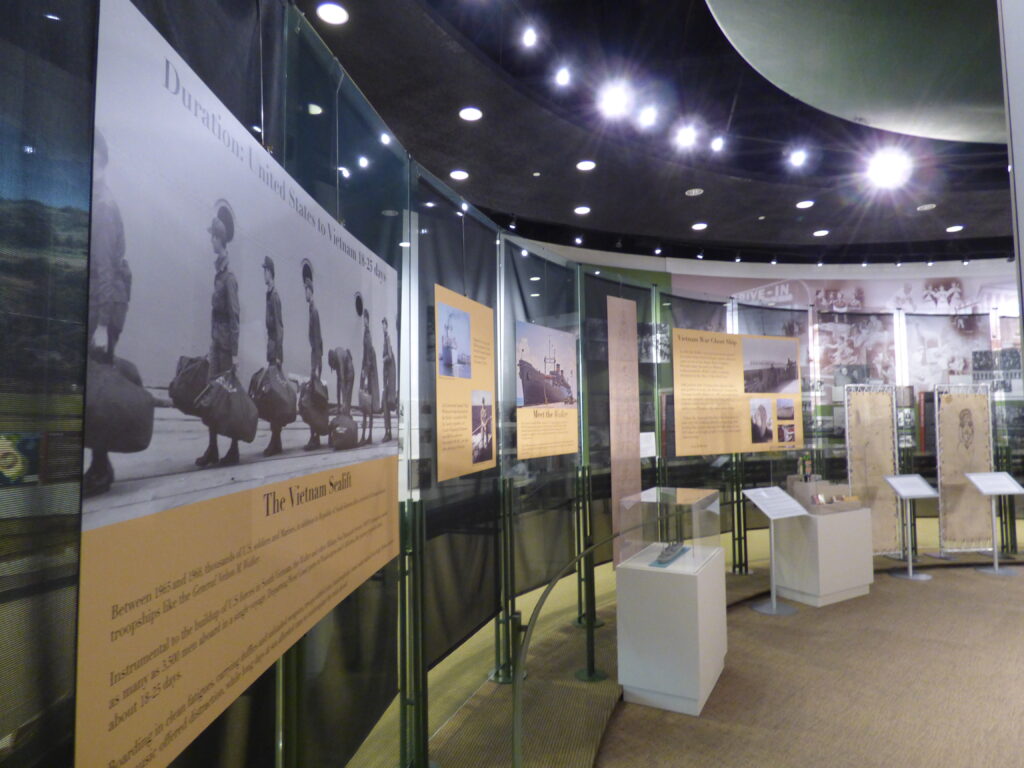 In addition to the permanent collection of the New Jersey Vietnam Era Museum, objects and images on display are courtesy of the Kislak Center for Special Collections, Rare Books, and Manuscripts from the University of Miami, The SFO Louis A. Turpen Aviation Museum and Library, MCR Investors and the TWA Hotel.

ABOUT THE NEW JERSEY VIETNAM VETERANS’ MEMORIAL FOUNDATION
Since 1995, the New Jersey Vietnam Veterans’ Memorial has provided a place to remember and honor the 1,563 New Jerseyans who made the ultimate sacrifice during the Vietnam War. Each year the Foundation welcomes thousands of visitors and guests to dozens of ceremonies, educational and outreach programs.

The adjacent Vietnam Era Museum is the first and only educational center and museum of its kind in the United States. Dedicated in September 1998, the Museum is devoted solely to gaining an understanding of the conflict in Southeast Asia and the surrounding political strife in America.